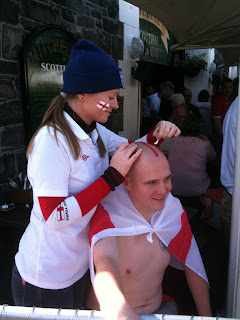 I've been away for the last three and a half weeks, visiting South Africa. It was odd not to have any internet access - they do have it there, of course, but we never seemed to be in the right place at the right time. Also odd not to read a single book in that time - I took a stack but the moment never came. I suppose I was too much in the present for once to be transported away by a story, or the internet.

So, it's nice to see you again, and fun to catch up on reading Strictly posts, especially the excellent story shortlisted this month.

I came home to the news that two of my poems have been bought for an anthology to be published in October. There's something about the fact that I will be paid for it that is special. Pounds for poems, I can't quite believe it. And it's the first time I've ever submitted a poem for publication.

Before that, my most successful line of verse was: You can stick your vuvuzela up your arse. Not a pretty sentiment, I know, but as it was chanted by thousands in Port Elizabeth at the Slovenia game, it must count as some form of publication. The oral tradition persists. So that's the name of the little chant I've posted below. It's dedicated to our new friends, Dave and Steve, who won't see it here, but whom we met at the USA match and arranged to meet again for the Algeria game in Cape Town and finally in Port Elizabeth. The photo shows my girlfriend, Jess, painting the cross of St George onto Dave's head. He quaffed three pints of Guinness immediately after breakfast and went on to deal with another twenty or so during the day. He steadfastly refused to go on any safaris; when I said he must see some animals while in Africa he said, 'I'm looking at one now.' This chant is a summary of what he and Steve might have seen if they had ventured away from the bars.


You can stick your vuvuzela up your arse

Did you drive a thousand miles every week
from Cape Town to Rustenburg and back again?
Did you cross the wide Karoo?
Did you do the Garden Route?
Did you put 5,000K on your hire car?

Did the desert spread before you like a map,
with a disc of blue arched over and beyond?
Did the mountains suck your breath out
as the highway stretched the distance
without a single motor on the road?

Did you load a buffalo onto a truck?
Did you strain until your back was fit to break?
When the farmer said five minutes
until the beast is dead
did it make you pull until your muscles tore?

Did you ever walk alone into the bush,
find a roan antelope beside the path,
did you sense the touch of nature
when you looked him in the eye
and the sadness as he slowly backed away?

Did you eat a kudu steak while you were there?
And a warthog sausage sandwich for your lunch?
Did you taste the huntsman’s quarry
and the olive groves of Beaufort,
did you sip a pinotage in Stellenbosch?

Did you see the whales breaching in Plett Bay
or mistake it for explosions in the sea?
Did you stare another hour
for a glimpse of fountain shower,
did it thrill you just to know that they were there?

Love it, Rod! Especially the sad antelope, for some reason. And congrats on having the two poems accepted!

Many, many black millionaires in SA, now Rod - but I guess you're not referring to them!

I don't take an 'anti' stance to things just for the fun; it really does scare me when people paint themselves with 'national colours'; it's racism pure and simple. Am so glad the 'Gerries' won - now all the flags are down locally, except one! Feels like normal again...

I'm sure that South Africa will stay in your heart, stories and poems for a long while to come, Rod.

Sounds as if you had quite a trip.

I love the antelope too! Great stuff, Rodders. Good to have you back.

Fidelity - it's not rascist to support your national team. It's a bit of fun.

Whenever I go to support England at football or Rugby, or indeed team GB at athletics, there are always lots of black and asian faces, all wearing their colours.

Nowt to be afraid of.
HB x

Welcome back, Rod! You've been missed. I'm glad your experience in S.A. has been so broad - makes the sting of the football recede to a realistic level! I liked the antelope bit especially too.
Susiex

Love the poem too, Rod - my heart tugged for the poor Buffalo - why did he die? And I think Dave and Steve should be made official In-ger-lund mascots with their total dedication to the game at the cost of all the wonderful stuff you and Jess did - brilliant - and welcome home.

LOL! Brilliant, Rod and so glad you had a good time. Congrats on the poetry achievement - welcome home :)

Debs - the buffalo lived. We moved four that day. It was the hardest day's work of my life. You only have a limited time to find the animal after it's been darted (imagine losing a buffalo) and then you have to lift it's head so the airways are clear and it can breath. We had a lot of trouble lifting one onto the lorry, but managed in time. I gave it the injection of antidote to the tranquilizer after we had driven it to the new enclosure. I could talk about this shit for hours.

@HB I saw them once throwing steel bruscar - rubbish - bins against the window of the GPO in Dublin behind which was the statue of Cuchulainn. Very aware of the political symbolism of the statue!

Great writing, Rod. No wonder your poems have found a paying home.

Thanks, Derek, and others.