Not Everybody's Cup of Tea 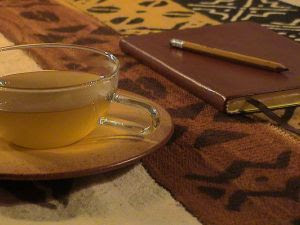 I've become a bit fussy in my old age. And I've also found that once you hit a certain age, you actually  worry less about being seen to be fussy.  Case in point has to be a Nice Cup of Tea/Coffee.
I'm sure I never used to care much about the qualities of a cuppa.  If someone asked "d'you want one" I'd nod and drink whatever was placed in front of me - but then  in my youth there wasn't a great deal of Tea consumption going on - there were other beverages far more enjoyable around, weren't there?
So nowadays I don't fret that there might be raised eyebrows from the Tea Provider when I pipe up with "can I put my own milk in please... I'm a bit fussy" - because, seriously, what CAN you say to that? I know what I like and I know how I like it, thanks.  No apologies necessary.  We can't all like the same things, otherwise where would the queue for Russell Brand end...? although even he could do with (in my opinion) being cross-bred with Johnny Depp for optimum effect - but then that's just me.
So what does my Frankensteinian musing of a Brand/Depp combo have to do with writing I hear you ask?
Well,  it struck me that the fussiness over how my tea should taste, equates to precisely the same in terms of how I like my books to 'taste' - both in reading and writing.
In my youth, I would never have hurled a book across the room at warp speed and punch the air victoriously as it landed in the only place I considered fit for consumption (WPB).  Nope, I would slog on through, determined to read every last word because after all, if it was deemed worthy of publication, there must surely be something wrong with ME if I didn't like it.  I was clearly literately sub-normal if I wasn't enjoying it.  Even though I drew absolutely no pleasure from it whatsoever.  The Muppetry of youth (mine I mean - you were probably far better balanced as a child).
Of course the 'slogging on through' mentality was probably a throwback from schooldays and English Lit lessons, where you HAD to read to the end of the book/play/mind-numbingly dreary stanzas because that's what you were there to do.  Throwing Henry IV Part I into the bin for it's laborious qualities would surely have resulted in a fate far worse that the wrath of the teacher.  But I digress.
For these days I have no such concerns.  If a book doesn't quite give me the 'taste' my literary buds are hankering for, then I have to place it on a 3-Step Programme (for it's own good, of course).
1.  It is allowed to 'rest' for a while, whilst it considers it's options. During which time I might take up another book in an attempt to rid myself of the sour taste the other has left behind.
2.  Then it is given a second chance, whereby I will try to overlook dreary, convoluted, un-credible sections which irritated me in the first place and skip to the meaty stuff.  But if this skipping becomes too cardio-vascular and to the detriment of the story, causing me to lose the plot....
3.  Then it's a one way-ticket to the File in the corner of the room I'm afraid.
Same with the Work-in-Progress.  If it's boring me, not getting the taste buds salivating, making me yearn for a spot of hoovering or (very bad sign) dusting, then it's abandoned.  Forget the crash trolley, it's too late.  The WIP becomes an RIP.
Blame it on my age but I know what I like.
And life's too short to put up with a less than lip-smacking brew, don't you think?
Posted by Debs Riccio at 06:00

Email ThisBlogThis!Share to TwitterShare to FacebookShare to Pinterest
Labels: you only get an "oo" with Typhoo

LOL, Debs - love the idea of sending a book to the equivalent of the 'naughty step' to consider its options!
Susiex

Yep, yep...am nodding away here. I too ask to put my own milk in to tea and I can't stand reading when it feels like a chore. It feels like eating a really bad meal to me.
Great post, Debs!

I love this... On the fussy tea drinker front I find myself on the receiving end of some very odd looks when I ask people to leave the tea bag in. As for books I don't like, I used to return to them (after a decent interval), under the misapprehension that it must be my fault if I didn't 'get' them. But reading should be a pleasure, so these days I usually discard them!

I was in a hostel in Derry last year and this Australian - I love Australians! - came to my side as I was fishing the tea bag out of the cup, and asked me for it! That's an easy one to oblige; he liked weak tea and could manage on other's throwouts.

I gave up on Roddy Doyle's The Woman Who Walked Into Doors recently after only 13 pages - full of simple sentences, mostly 3 - 4 words. Just unbearable. But Clarissa after 1,000 pages half way through; got through 2 of the 4 volumes; readers say it's boring, it certainly is. Praised myself for finishing Melmoth the Wanderer though; it's so depressing I wanted to bury myself in the back garden before finishing it, but it has relief, of a beautiful story inset in the middle.

Lots of brands of tea, my latest fad is Lord Nelson's Vanilla - even put a tea bag in my pocket sometimes to have the flavour all round me going out.

With you on the own milk in tea, Debs. Am currently near the end of "White Tiger" for book club and though it's had rave reviews, I am not loving it and trying to work out why. had it not been for book club I'd have set it down on the naughty step. PS I love Barry's tea best and I hate anything scented although I can just about cope with mint when I have an upset stomach and camomile when I can't sleep.

I didn't love it either, Geri...we do tend to converge on books so often, don't we?

I've just given up on Pride and Prejudice and Zombies. I didn;t like P&P first time round and this one wasn't different ENOUGH as far as I am concerned!

I'm with you on the tea Debs, But I think I am still stuck in the English Lit class. I still feel the need to plough through - I don't think I have ever given up!

That's not to say that I never reached the conclusion a book was rubbish - I just take the long-way-round route.

Great post, Debs, made me think about not feeling obliged to finish the book when I could be reading another, better one.

Love the WIP becoming a RIP idea! Well done! I just abandoned a book that I was toiling through- only made it to page 38 after 3 weeks. Instead, I picked up Clodagh Murphy's Girl in a Spin, finished it in 3 days and I am so much happier! Thanks for the blessing to leave unread books behind- I have a hard time with that one.

Susie - I THOUGHT it sounded like I was sending the books to the naughty step...
Glad you agree Caroline - thanks.
ChrisCross, I'm delighted you too can discard something that isn't up to scratch, but leaving the tea bag in? Eeeewww!
Fidelity I love your Australian T-bag borrower - my mum used to hang her old ones on a little line in the kitchen and re-use them (2 old ones made one fresh brew apparently). I'll look out for the Nelson's Vanilla bags.
Geraldine, have you tried using a big sprig of FRESH mint in your hot water instead? You'll never use a mint bag again - trust me!
Thanks Jacqui - seriously, life's too short to be doing something that doesn't make you happy - book-trudging included (hark at me!)
Michele - you always have my blessing, whatever the event - and I'm halfway through 'Girl in a Spin' as well - great minds!

I have to ask whether it's coincidence that this should be posted the day before the Bloomsday tribute to Ulysses....

Furiously nodding along here too - especially the cup of tea. I only drink mine 'a certain way' for years now - oh dear...

That's an easy one to oblige; he liked weak tea and could manage on other's throwouts.
Banner Advertising Network India

Yep, yep...am nodding away here. I too ask to put my own milk in to tea and I can't stand reading when it feels like a chore. It feels like eating a really bad meal to me.
Great post, Debs!