Guest Blog by Katerina Burton - On the Road to Inspiration 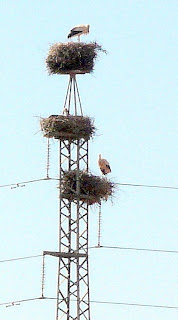 After eight months of living and travelling in a motorhome, I’m back in good old England and living in Devon.
As someone who’s never even camped in a tent before, the whole notion was a bit scary, but I coped surprisingly well.
With my husband, I toured France, Germany, Austria, Belgium, Spain, Portugal, as well as parts of Britain that I hadn’t seen before – right from Land’s End , all the way up to John o Groats, and Dunnets head.
It was the most interesting eight months of my life. We saw some amazing scenery: the snow capped mountains of the Sierra Nevada; the world’s biggest and longest sand dune, where I climbed over 200 feet up, even though I’m terrified of heights; the endless vineyards of the Mosel Valley in Germany. I gained plenty of inspiration for stories and travel articles. We visited some places that had great names I can use for characters – I’ve made a list for my next book!
I kept a journal for the whole eight months and wrote it up daily – well almost. I sometimes left it for a few days, but caught up when I had some free time, usually sitting in the sun with a glass of chilled white wine!
We saw some bizarre things too. Once, when driving through a part of Portugal where there were no trees - it was quite barren and desert like – we saw stork/crane nests on top of the electricity pylons, or along the gantry of the bridges across the roads. There weren’t just one or two, there were dozens of them. I guess because they need to build their nests in the highest places possible for protection, and there are no trees, the pylons are the next best thing!
The downside to the whole trip was that we often didn’t have an internet connection. Some campsites had wifi – at an extortionate cost I might add. Others didn’t have anything.
However, we knew this would happen, so we coped. It just meant that when we did get a connection, we had loads of emails to download. McDonalds came in very useful I can tell you!
The other downside was the insect bites. It was horrendous, especially in Spain and Portugal. I reacted very badly to the bites and swelled up. Even though I plastered myself in insect repellent and wore a hat, the little blighters still got me and wherever they bit, it reacted – at one point, my feet were so bad, I could hardly walk for three days!
Towards the end of the tour, I wanted to come home, which is why we only did eight months. Originally, It was meant to be a year, but I’d had enough of living in such a confined space, the weather had turned colder, and the evenings got dark earlier. We could have headed to the south of Spain where at least it would have been warmer, but we decided to call it a day. I’d lasted longer than I – or anyone else for that matter - thought I would, so I’m quite proud of myself. And every downside has an up – those dark nights in the motor home, with no internet or TV, meant I had plenty of time to finish my first novel.
So, now I‘m home and halfway through editing that novel. I have some ideas for another three books, one of which I want to turn into a script, and after that, I’ll write up the articles from the travel journal. Then it’s back to the short stories. A writer’s work is never done!

Katerina is primarily a short story and non-fiction article writer, but also writes the odd Haiku and recently finished her first novel. Previous writing jobs included being a regular website columnist and occasionally copywriting for The Anthony Nolan Trust.

She's sold to various women's magazines as well as several twist in the tale stories to The Weekly News and a short story to Australia's That's Life. "I think inspiration for writing is all around us," says, Katerina. "We just need to open our eyes and really look."
Posted by Administrator at 06:00

I am so envious.
I spent my long holidays at Uni travelling, and had a gap year, but I'm still not sated and would love to do it again.

It's not so much the being on holiday that I like, though I do like that, it's the forward motion of moving on to the next destination.
HBx

Sounds like a wonderfully inspiring trip, Katerina - it'll be interesting to see what sort of writing comes out of it.

Tents and all things connected with camping are my worst nightmare! I admire you, Katerina. I like my luxury, but envy those who can take on the campervan challenge.

Welcome back and great news about your novel and the three more to come!

I love that pic of the stork/crane nests on the pylon - nature always finding a way to cope with the human environment (also makes me think that perhaps in the not so distant past that part of the world had trees..).

Thank you for sharing a snippet of your amazing travels. I hope I get to read more!

Wow Katerina, what a thrill! It must have been so wonderful to be in such different places, gatting inspiration from so many things. Glad to hear you still magaged to unwond with some wine in the evening - sopme things should never change - and I too swell with nasty bug bites when on holiday. Pesky varmints! Great post.

I remember when you were just setting off - can that be 8 months ago. You've had a fabulous experience and somthing you'll remember forever. Well done to you for doing what most of us would only dream of.

What a wonderful experience! I truly envy you your last eight months. I know what you mean about the bugs though. Congrats on the novel.

Wow, that sounds like a wonderful experience you'll treasure forever. I'm sure, over time, that dipping into your journal will provide inspiration for all kinds of writing!

What a fantastic experience, Katerina! Speaking from someone who has never left the shores of Britain I am in awe of you!

Can't wait to see the novels and stories, artivles informed and inspired by your travels.

So you did it - well done you! So much inspiration, I'm sure. And to finish a novel at the same time - must have been one of the best years of your life.
Susiex

It was great and we saw some fantastic things, but it's so nice to be settled in a house again!