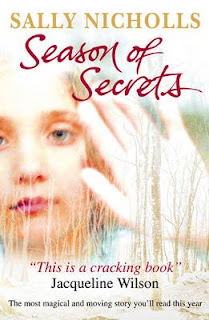 I like reality. I like real people, real emotions. Real people are interesting. A book about a realistic person dealing with the tricky problem of being a human being is so much more interesting to write than a book about a realistic person dealing with the tricky problem of a vampire and some fairies. When it comes to reading, I like fantasy books, and I loved science fiction as a child, but as a writer ... realism all the way.
Which is why I struggled so much writing ‘Season of Secrets’, my second novel, which is based on the pagan myth of the Oak King and the Holly King. I fell in love with the Oak King, a damaged summer god forced into a cycle of death and rebirth every year in order to make the summer come, and knew he’d work in a children’s book. I even thought I’d solved the real-people problem by adding a child called Molly, with enough real-life problems (cunningly linked to the Oak King’s story) to fill half a series worth of novels.
But, my God, fantasy is difficult to write! Villains, for example. What do they do when they’re not being villainous? Where do they live? Why don’t they just crush your puny nine-year-old heroine to a pulp, instead of allowing her to run off and plot against them?
And what do gods do all day? In the myths, the Oak King just sort of exists and spring and summer happens around him, but how does this work in real life? When he’s reborn, does he get clothes, or is he naked? Would he bother with clothes, just to satisfy the sensibilities of pagans and primary school librarians? And how does he feed himself? Does he need to? Does he have friends, besides the trees and the flowers? And when pagan mythology says ‘god of summer’, do they mean god of summer for everywhere? Or just the Northern hemisphere? Just Britain? Just his little section of Northumberland?
‘Ways to Live Forever’ was a lot easier. I knew how things worked in ‘Ways to Live Forever’. In ‘Season of Secrets’ I had to deal with all this world-building, which really wasn’t important to my main story, which was about a child coping with the death of her mother. And I knew right from the start that Molly had to tell other people about her man - I never believed in those children’s books where kids find secret passageways or magical creatures and never mention them to their parents. If I’d found anything that cool, I’d want to tell everyone about it, and I knew Molly would too. But if the others can see him, how does he belong to her?
In the end, I took inspiration from writers like David Almond, who let the reader know only as much as the main character does. Molly doesn’t know if her man is real or not - so neither does the reader. She doesn’t know much about his life - so neither do we. She wonders about it - she asks the sort of questions that I hope the reader asks - but she doesn’t get an answer.
I believe in allowing children to engage with a novel - to ask their own questions and come up with their own answers. I believe half of the fun of reading a book is working the tricky bits out for yourself, and I hope I let my readers do this. And I hope it doesn’t come across as merely lazy writing.
I tell you what, though. I’m not doing fantasy again. My next book is going to be realistic, modern-day and totally simple to write.
Except it seems to be set in medieval England.
Help!

Sally Nicholls is the author of Ways to Live Forever and Season of Secrets. Her novels have won numerous awards, including the Waterstone’s Children’s Book Prize, the Glen Dimplex New Writer of the Year and the Luch Prize for the best novel published in Germany 2008. Her website is www.sallynicholls.com.

For a free copy of Sally's book, do comment below and one of you will be picked from the Strictly Writing hat! The winner will be announced on Sunday, 7th February! Please comment by 5pm on Friday the 5th, if you want a chance to win the book!
Posted by Administrator at 06:00

Sally - this sounds wonderful! Just the sort of book that draws me in. I'm so glad you carried on with all the 'hard work' - and good luck with the medieval research coming up.

Yes, it sounds brilliant. Trip over to Amazon for me, I think.
Best of luck with medieval England, Sally and thanks for posting!

Congrats on your success so far, Sally. Looking forward to many more books, and thanks for participating.

Hmm, in my short experience of writing fantasy, it's just as challenging as writing 'real' life. The reader must never be patronised, or their willingness to suspend belief taken for granted, and i therefore you have to work extra hard at your characters and their plots seeming plausible.

For my fantasy kick, I always turn to Terry Pratchett!

The Season of Secrets sounds so lovely! I do like the idea of having an Oak King and a Holly King.

Great post Sally and so encouraging to try things that stretch us as writers...

Sally, it sounds wonderful (and I love the cover). I do think the world-building is fascinating, but yes, hugely challenging and, as you say, only the tip of the iceberg shows in the end. As you're not doubt discovering writing historical fiction is somewhere between the two: on the one hand, you don't have to make it up from scratch. On the other hand, it can be incredibly difficult to find out the simplest things, if no historian happens to have been interested in them... Sometimes I think making it up would be easier, but a) my conscience rebels and b) as you've suggested, actually, it wouldn't be.

And if I get picked out of the hat, my daughter, who adored Ways to Live For Ever, will love me (and Strictly) for ever...

Have to agree with Samantha there - and also that, um, you clearly haven't got my parents! :) But none of your worries about world-building show in the book - it reads beautifully smoothly, and not at all as if we need to know more about the god's world.
Don't draw me out of the hat, btw, I already have a copy.

Hi Sally. Thank you for your comments about Fantasy. There is often this idea that it's easy to write, because, well, it's all made up, isn't it? But as you say, it often proves a lot harder to make it realistic. Having written a novel in a real world setting and one in an invented one, the latter was much, much harder.

So hat's off to you, and very best of luck with the novel. It sounds fabulous.

Thank you all! I hope whoever gets it likes it!

Thanks, Sally - and very best of luck with the medieval one!
Susiex

I would love to share this blog to the friends,nephews and nieces. This blog Children's books about nature
would really inspire their lives once they can read it. Especially those who loves to read science fiction stories.

A good blog always comes-up with new and exciting information and while reading I have feel that this blog is really have all those quality that qualify a blog to be a good one. Thanks for sharing it with us.