My empire state of mind 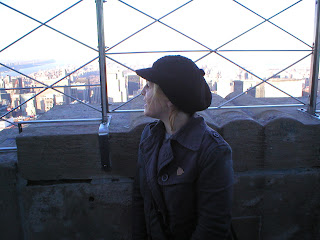 Who or what inspires you? Is it a specific writer from yesteryear, perhaps buried in childhood, or is it a person or place you truly love?

Apart from being inspired by the great Irish writers like James Joyce and Samuel Beckett, I also cite New York as a great source of inspiration - as Jay Z and Alicia Keys rightly point out in their song Empire State Of Mind

Walking down the avenues, many tales are hidden behind each tiny window - from entire families who live in small spaces to immigrants who have brought their lives and problems with them from Ireland, the Caribbean and Europe - those who have fled other lives in search of better futures. And it's no co-incidence that in books two and three I've set chapters in New York, firstly in the 70s, then the present day because I feel I know it so well and I'm confident writing about it.

That's why I've come to love Colum McCann's 'Let the Great World Spin' (see previous blog post. Coincidentally he stole my idea for a future novel which was to be a group of characters each with a story which is woven into the others at the end. I had plans to focus on five Irish characters in Manhattan with one incident as the centrepiece, but now I'm reworking for a future novel! Thanks, Colum!

As a child I was inspired by Enid Blyton, of whom the teacher strongly disapproved, Laura Ingalls Wilder for the pure escapism, and Roald Dahl because he had such a weird and wonderful imagination and some great one-liners in his books which I could recite off by heart. As a child when you're young you can freely enter this other world of characters, all of whom want to be your best friend.

And as a teenager I remember being inspired by SE Hinton's book The Outsiders. It's about Ponyboy Curtis and his brothers who belong to a gang of youths called Greasers in Oklahoma. It's a fantastic teenage novel and one that everyone should read.

Lynne Reid Banks' novel One More River also had a huge influence on me growing up (I'm about to start reading it again). I first read this book as a nine-year-old. In the novel spoiled teen Lesley moves with her parents from Canada to an Israeli kibbutz because her father feels that the family has lost any sense of what it means to be Jewish. Much of the novel is set before, during and immediately after the Six-Day War period and follows Lesley's efforts to adjust, as well as addressing her growing friendship with an Arab boy.

Then there was Nancy Drew who every girl wanted to be, and it was at the age of 11, I decided to write my own Nancy Drew novel. And I did - it spanned a file block, lacked continuity, plot and POV.

Having said that I'm inspired by these writers, not influenced. I have my own style and I'm comfortable with that. I like to admire from afar but at the same time recognise that there are some great writers out there.

What are you inspired by?

Pic: That's me inspired by the view from the top of the Empire State building
Posted by Gillian McDade at 06:00

Enid Blyton inspired me greatly - and the House on the Prairie books too! Then Agatha Christie.

Nowadays it is humorous yet perceptive and moving chick lit; just read Irish Claire Dowling, which has really inspired me to raise my game.

I also find music hugely inspiring. When a track makes my heart sing, i wish i could achieve that with my words.

Wonderful picture, Gillian! And very interesting post. Exciting, slightly futuristic YA is what's inspiring me right now. Not sure about authors who inspired me in childhood...am sure there are many and am racking my brains now!

S.E. Hinton's The Outsiders absolutely blew my mind away. I was 13 when I read it and it's impact is still felt decades later. This is one book I can read over and over and over again and still be amazed. I think it's not just for teenagers, it's for the rebel in you.

So yes, for me S.E Hinton's the Outsiders. And London too especially during "Open House Day" held yearly now, every September - lots of "lost" London to see and be inspired by.

Marian Keyes' 'Watermelon' was The Book that gave me 'permission' to write how I wanted - but lines from music inspires me more than books or writers
I have agreat Michael Buble-inspired book waiting in the wings. Can't wait to get round to that one - he may even be my hero. Okay then, he already is!

Books and music and beautiful cities all conspire to inspire in the rich lives we lead. However, odd though it sounds, and given that I'm a creature of habit and routine, change is the element that really gets me going. Whether it's a small change in the daily programme or something more exciting, like waking up in an unexplored city...it seems to jolt the senses and get the juices flowing.

Thanks for the comments everyone. Old Kitty - you're right about The Outsiders being not just a teen novel. Talking about it has made me want to re-read the book.

I also agree with Samantha Tonge. I was very much inspired by Enid Blyton and her books which explains why I decided to write a book on her, titled, The Famous Five: A Personal Anecdotage (www.bbotw.com).
Stephen Isabirye

I was inspired by Tell No One by Harlan Coben. I read it while away on business and stayed up until 1.30am, glued to the story and breakneck pace. I was so inspired that I read as many of his other books as I could find, afterwards.

The only downside was that it made it hard for me to return to my own writing, because I know knew how well it could be done!