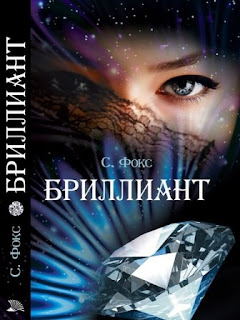 When I started to write my first novel, I was entirely seduced. It was like being caught in a spell – seeing real words appear on the screen, the story unfolding before my eyes. And, never knowing what twists and turns the plot might happen to take – well, that only added to the thrill of creating an entirely new world of my own.
But then, perhaps I was too selfish. The Diamond was all about me, the sort of novel I wanted to read, with no thought of maintaining a consistent genre and no concept of sales and marketing teams and, despite securing an agent, my story was only published in Russia. Not that I’m ungrateful for that, and I think the cover is ‘Brilliant’ which by chance is the name in translation! But, to write a whole book and then be unable to read a word unless I do a crash course in Cyrillic – well, that’s quite a cruel irony, don’t you agree?
It was set in a sinister Victorian world of dark circles and amoral tricksters. It had a maharajah, a cursed diamond displayed in a golden cage, and...Oh, there I go again. But, it’s been so hard to let go of that book when I didn’t just write it, I lived it. I peered into every dingy room, and smelled the acrid candle smoke, and walked every gas-lit cobbled street as if I’d become my heroine: that naive crinolined narrator beset by ghosts and dissolute cads.
And now, I wonder if I was possessed during one of my séance scenes, because all of my characters seem too real. I still muse on what fate had in store for them next – where they went, what they did when I wrote THE END. They’re the dead who still walk, who refuse to rest, who keep drawing me back into their world – so much so that, over the past few months I’ve rewritten the start and added more scenes. I’ve tossed and turned in the depths of night with their voices hissing around me like snakes. It’s been almost enough to drive me mad, except – and might this be too much to hope? – I may have recently stumbled upon a way to throw the spirits off.
I’m going to reclaim my own destiny. I’m going to kill my antagonist – the glamorous and cunning fiend who, despite all of his villainous deeds, I just couldn’t bear to leave behind. It’s painful, but it has to be done. He’s been having his wicked way for too long, seducing and then almost ruining me with his unfulfilled promises and dreams.
I must take a deep breath and prepare to be strong. This time there will be no going back, and I know exactly what to do. He’s going to burn in a terrible fire when a candlestick is knocked to the floor. I can already hear the crackling roar as the flames take a hold of his bed sheets. Oh, but how will I bear his agonised screams? I know – he’ll be drugged and senseless. That way, I won’t hear him call my name and be tempted to save his life again. He’ll die, and my soul will be exorcised.
And, in case that doesn’t work, if I weaken and fail to carry it through – has anyone got a crucifix – or some holy water – or a wooden stake? Desperate times require desperate measures!

As a form of diversion therapy, Sarah has recently started a blog: THE VIRTUAL VICTORIAN – FACTS, FANCIES AND FABRICATIONS. She would love to see you there. http://virtualvictorian.blogspot.com/
Posted by Administrator at 06:00

Oooh Sarah, great post and definitely a cunning plan to shake your man. But would that really be 'the end' for him d'you think? With an imagination as dark and mysterious and *brilliant* as yours, you'd probably think of a way to resurrect him...after all the possibilities are endless when you're creating your own world, aren't they?

Sarah, I hope you can move ahead with a new project once you exorcise the demon-man :)

And I love your blog btw.

Hi there.
Am wondering if you are into a new project yet?
HBx

My mum's got some holy water encased in plastic virgin mary's (all sizes) that she bought when she went to Rome and had a Papal visit and blessing in 1979?

I think they're still valid...

Good luck with reclaiming your destiny! And great cover in Russian - amazing - love it!

Fantastic post, Sarah! I know exactly what you mean and hope you will be able to exorcise these ghosts [in a satisfying and enjoyable fashion!] soon. I was really struck once by a Hilary Mantel quote in Mslexia. She said something about how she would be taking a break from writing and find herself shivering violently. She said [paraphrased], 'I wondered why I was so cold and I realised it was because I had killed a character off and THEY were cold.' I thought that was wonderful [if a little spooky!]

Debs - that's so funny - I've already thought of a means of 'resurrection'. Might have to call in Old Kitty and a plastic Virgin Mary!

Ellen B and Helen - yes! Inbetween obsessing over The Diamond, I've just completed another novel which is currently with my agent - so fingers crossed for that one.

Oh Caroline - that's interesting. I love Hilary Mantel. Have you read Beyond Black?

I love that cover! Very nice - thanks for your post, Sarah! And best wishes for all future work,

Great and very vivid post, Sarah - thank you! Good luck with the exorcision (is that the right word?)and even better luck with the new novel.
I too love your blog.
Susiex

It sounds like he will be as hard to kill off as Sherlock Holmes! Maybe you need to kill him off ambiguously so that you can resurrect him if you miss him too much. I love the cruel irony of only being published in Russian!

Yes, I have read Beyond Black, Sarah. Found it a deeply unsettling book, but very good. Have you?

Great post, Sarah! But can you really kill him off? I loved "Beyond Black" so much!!

Thanks Susie, Betty, and Geraldine.

Yes, Caroline, I read and loved Beyond Black and Betty tells me it's going to be made into a BBC drama. We are just wondering if it will be dark enough to live up to the book.

What a great post! And I know how you feel - my characters are like the undead to me, and it's worse when a reader says "Will there be a sequel?" and the undead start rattling their chains again (well, I say it's 'worse' but obviously it's also very nice). Not sure I can kill mine off though...mass murder isn't very chick lit, is it?

Great post and i love the cover too. Good luck with the exorcism!

Thank you, Emily and Sam.

Great post, Sarah - and then I 'wasted' even more fascinated time over at your blog!

Oh thanks, Rosy - hope it wasn't too wasted!:) There's a very gorgeous photo of a dashing gentleman there now...well worth another look!

Sarah, I was there with you during every word of this post, living it with you and your characters.
Yeah, kill him off...its the only thing. DOnt make it too painful though or else he may come back to haunt you in another guise?!

I didnt realise you are the virtual victorian either - will pop over and say 'hi' there. Fx