Give it a rest

As a person of northern, working class pedigree 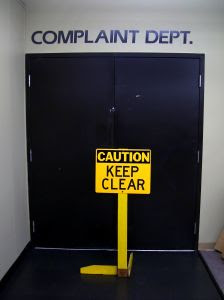 , I simply
cannot abide whingers. My DNA includes the immortal response to any query as to my well being.
'Not so bad.'
Remember the scene in The Full Monty with the MC balancing on the roof of a car which is slowly sinking into the canal. When a passing friend asks him how's been...you get the picture.


This wasn't made up for a film. Towards the end of my Dad's life when he was attached to an oxygen tank ( replacing as it did, his habitual Embo Regal), whenever anyone expressed sympathy for his condition he'd remind them that, 'There are plenty in the grave yard that wished they felt half as good.'

So you can imagine my annoyance when at a recent coffee morning of well heeled Yummy Mummies, the complaints started to crank up.

I admit here, that my envy of their cashmere clad, pert little buns may have hampered my objectivity, but come on ladies, in what universe does a late Ocado delivery constitute something to even mention. Ditto finding a cleaner. Ditto gaining half a pound.

I spent most of the morning humphing in a way that only emphasised my unbotoxed crows feet.

Later I met a writer friend and told her exactly what I thought about these graceless lovelies, before moving on to a discussion of the publishing industry at present. And here, I'm ashamed to say, I joined the fray. I whinged and whined like a good 'un, only with untoned arms.

Advances are down.
Discounts are up.
The Supermarkets have too much power.
Publicity budgets are being slashed.

To anyone listening in we must have sounded like a right pair of numpties. For we have both had an enormous amount of luck. We are both published several times over. We both make a living from our work.
When ever I'm tempted to moan, I remind myself of something Elizabeth Gilbert of Eats, Prays, Loves fame, has on her web site, and which she says, she too tries to remember when this mad business starts getting her down.

'It's not the world's fault that you want to be an artist...now get back to work.'

That's fine for someone who has sold a squillion copies in every country in the world, I hear you shout. Pragmatism is easy when you're on the up and up.
And still I'm drawn to accentuate the positive.

Don't get me wrong, I'm not advocating that we writers ought to be eternally grateful for any scrap that falls from the publishing table, rolling over, baring our arses and preparing to be shafted. Far from it. My advice to any writer would be to get a good agent and never sign anything unless you are absolutely sure you understand it.
Nor am I saying that we shouldn't be allowed to have a scream when things go wrong. Getting a disappointment off your chest is often just what the doctor ordered to avoid festering bitterness.

But I do think it's worth reminding ourselves regularly that despite rejections, bad reviews, poor sales, we remain ridiculously lucky.
We have a strange, yet wonderful gift. We are the teller of tales. We live to entertain and thrill. We conjure laughter and shine lights in remote corners of humanity. We should thank our lucky stars every day.

When I pointed out my unattractive inconsistency to my friend, she in turn pointed out that discontent is in fact the writer's best trait. It's this that forces us to work and re-work a sentence, to return to themes again and again.
She thinks we should embrace it. If being dissatisfied with things makes us better artists then so be it.

Maybe she's right. But I remain unconvinced. I hear writers endlessly rehearse the problems in this business. The stiff competition. The lack of imagination on the part of publishers. And I've never seen any sign that this hones their creativity, rather it just uses up energy.

So I for one intend to quit whining. When something makes me unhappy, I will try to change it, and where I cannot change it I shall try to accept it. And on those days when the literary world seems against me and my work, I shall at least keep it to myself.
Posted by Helen Black at 06:00

Ooooh sometimes it's also not so good to bottle things up and sometimes it's great to hook up with a really good friend (virtual or otherwise) to just vent - it clears the air somewhat.

But the best thing is how one goes from there after the smoke has died down and the dust has settled.

So for instance after I vent and scream that no-one loves me and my writing is beyond garbage it can't even win a silly chocolate in a writing comp that only me and another have entered, I take a deep breath and find out why my story didn't win and perhaps discard it or improve upon it.

It's all perspective maybe. And keeping positive and strong. And sounding like Oprah!

Great post, Helen. Reminds me of a conversation the other day with a non writing friend who said, 'I really envy you..you have something that makes you feel really contended, despite all the hard parts,' and I thought, 'Wow, she's right.'
Am deeply endeared by the lovely words of your dad...

Goo for you, Helen. There are always lots of people doing much better and much worse than us - it's just a matter of which direction we happen to be facing. The yummy mummies sound like a book scene in the making with the protagonist silently seething while stirring her coffee maniacally!

We all like a good whinge though, Helen, and better out than in, i say - after all, one of the definitions of depression is 'suppressed anger'.

But having said that, I have still maintained a very positive outlook since the choking duck bone incident on New Year's Eve (anyone on WW might remember this story) and have not felt down once about my writing since then, as i just have to remind myself that things could be a lot worse than for example, yet another rejection.

Healthy as whinging is, i do think we need to try to keep things in perspective.

But, isn't it good to let it out now and again, Helen?

Your 'whinge' is about real, threatening things,not personal gripes or bitchiness. And, I do think that those of us who are not so successful in the publishing world need to realise that it's not necessarily what we might have dreamed of when we first began to write. The odd reality check is no bad thing.

PS - even when I had a baby, it was the ooffee mornings where nothing but makes of disposable nappy was discussed that really used to drive me mad. But, I've since realised that when I start to talk about writing, the eyes of my non-writing friends have a sudden tendency to glaze over, just as mine did then...:)

Well, I'll come out and say it: I'm a whinger. Not proud of it, but 'tis so. Or at least, I'm a whinger in the eyes of the world. I think what I'm really doing is voicing all the thoughts and feelings that whir constantly round my brain with a view to sorting them out. That's my story, and I'm sticking to it.
Susiex

I certainly agree that getting things off your chest is a good thing.

But I worry sometimes that we, well me anyway, fall inot the trap of endlessly repeating the downsides to this business.

And although I don't want to be Pollyanna, I do want to try and remember what a terrific gift I've been blesse with.

Helen - great post! You remind me of my father, dying of cancer aged 80. When family and friends asked 'How are you?' he would reply 'Very well, considering the alternative."
A small bout of self-pity and whingeing is allowed isn't it? When 'Damn, I'm good,' is followed 24 hours later by 'Damn, I'm bad.' Or when you read an excellent book and whine to yourself 'Why didn't I have that idea?'...and so on.
Take a day off, eat some choccy, pull yourself together and carry on!

Gina - small bouts of self pity are not only allowed but de rigour.

But they must be small. And then you need to get back to work.
HBx

Oh Helen, what a timely post for me!
I have spent the last fortnight engaging in 'inner whinging' No-one has had to listen to me except me and I''m bored now. You're so right. This yearning to write, is more so much more a gift than a curse. ANd yes, though the publishing industry and agents etc seem to be a law unto themselves and often merit some whinging airtime - they too have a job to do?
THanks for this message today. I needed to be reminded. Fx

I sometimes whinge to myself, but more about the standard of my writing as I have not yet ventured into the publishing waters. This post was very helpful to me. Writing keeps me balanced. My inner self is only at peace when I am writing. Coffee mornings were never my cup of tea.

Fantastic post - love it. Actually, i like a good whinge every now and then, although I think the best ones are those which finish up with one laughing heartily at oneself.