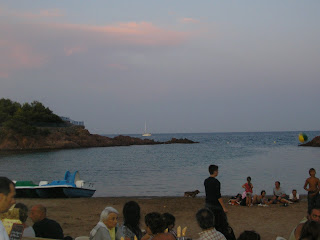 Picture this – or rather me - last week, swimming in an idyllic cove (see photo) along one of the quieter parts of the Southern French coast. The sea had emptied due to an approaching (or so it seemed) evening thunderstorm. I marvelled at the distant forks of lightning, whilst my children swam out further to rock-pool. They had worked out an ingenious way of transporting their fishing nets by wearing the luminous net as a cap, as the long wooden handles rode the waves, trailing down along their backs. Struggling with the increasing depth of the water, my youngest eventually passed me his rod and I wore it in the same style as I swam out. The locals looked on in amusement.

Yet they had probably already chuckled. On unpacking my beach bag I’d discovered to my annoyance, that I’d forgotten my bikini bottoms. My husband had passed me his spare Speedos, insisting I’d look okay. Desperate for a swim I obliged, grinning as I came over all Daniel Craig and strutted into the brine in said swimming trunks.

Then whilst treading water as I chatted with my dad, something suddenly struck me, and our hoots of laughter echoed around the bay as I broadcast an imaginary – but perfectly feasible - newspaper headline:

“WASHED UP ON FRENCH BEACH, ENGLISH WOMAN STRUCK BY LIGHTNING, DRESSED IN MALE SPEEDOS, WITH A FISHING NET JAMMED OVER HER HEAD.”

You see, life really is stranger than fiction, yet so often we are told by agents or editors that something in our work isn’t realistic enough. Are they joking?!

Take my last book. One agent couldn’t accept in the main premise of a woman getting pregnant and not realizing until she gave birth. Yet fairly regularly I read about this phenomenon in some newspaper and often it’s a sensible, mature women going into hospital with stomach ache and coming home with an unexpected little one. And in any event, isn’t fiction all about escapism? There’s no rule, is there, that says a fictional work outside the genres of Science Fiction or Fantasy has to be totally based on reality?

Take my present book, a kind of chick lit Past Life Regression to Ancient Egypt – isn’t this just one step further on from the array of Women’s Fiction books out there inviting the average woman to escape into the impossibly unreal world of New York or Parisian romance and glamour?

Whilst I strive to base the emotional life of my characters on real feelings, so that it comes across as credible and gains empathy from the readers, I feel us writers should be cut some slack when it comes to plot. Life is strange and fiction should be allowed to reflect this. Who’s to say someone can’t be gobsmacked by unexpectedly giving birth? Who’s to say Past Life Regression is all guff? And does any of this really matter in the more straight-laced genres, as long as the story has an effective hook and the characters’ personal journey seems believable?

So next time someone reads your work and says ‘but that wouldn’t happen in real life’, hold back and think hard before you change a word. I reckon my French beach headline could double as the perfect opening for a murder mystery novel…
Posted by Administrator at 06:00

Sam, I couldn't agree more. I've been guilty of it myself, I must admit, recommending that a friend change a small detail in a script because it seemed far-fetched only to be told it was based on a real life experience. And several times in my own life I've been struck by the thought "if this was in a book, you'd never believe it". So yes, slack please people! I love the sound of your book, by the way!

Yes, the same has happened to me, i've included strange things from my life in work, and they've been picked out as unrealistic - and no doubt, over the years, i've critiqued people negatively for similar things... Life is wonderfully bizarre so it's strange that sometimes we can't get away with demonstrating this when writing fiction!

All very true, and thanks for making this point so clear to us. We used to play a game when we were children, where we invented an 'impossible situation' for each other to try to explain as creatively but plausibly as possible. In your case it would have been: 'There I was, swimming in a thunderstorm in a pair of men's trunks ...'. (Maybe that honed my imagination for becoming a writer!)

What a wonderful game to play, Olivia! Could be a great writing exercise...

First things first: what a beautifully written post. that image of you all with your nets on your heads and the rods down your backs with a storm coming in will stay with me forever.

Truth is far stranger than fiction. Real life can supply an endless stream of high drama and obscure motive which outstrips even the best imagination, but, as you say, it's often these bits which seem less believable. Maybe they stick out as abberrations, whereas when we consciously plot we lay a credible path. Real life doesn't always provide that shapeliness and grafting it on afterwards can be the hardest part.

Olivia that's a great game. think I'll try it out on my kids next time we have a five hour drive up North.

Still smiling from imagining your chic French beachwear experience! ('Ah, cette Anglaise fou!' - or something).
See, what I love about fiction is that it IS fiction - it takes me into worlds and experiences that are new and unexpected. I love magical realism. I love original takes on life.
I do though need the fiction I enjoy to be BELIEVABLE. Within itself, that is. Nothing irritates more than an established character suddenly behaving in a way which is alien to all that's gone before, simply in order to facilitate the plot. I suppose for me it has to have its own integrity, if that makes sense.
Susiex

Aw, thanks, Susannah. And yes, i think you are right - i've been guilty of sticking incidences from my own life into work and they do stand out, probably because, as you say, they haven't been thoroughly plotted in from my imagination.

Hmm, i don't think chic will ever be a word that applies to me, Susie:)
Yes, i know what you mean, i think one has to strive to make one's character true to itself. And to be fair to the agent who couldn't grasp my surprise pregancy storyline, in retrospect i don't think i made it credible enough.

You're SO right Sam. I did laugh out loud at that headline. And the fact that I wouldn't be seen dead in a bikini even with DC knickers!
Great post as always.

We really do need a photograph!

Great post, Sam! And yes, a lovely image of you in the sea with your kids!

You really don't want a photo, LOL - although they didn't look too out of place as hotpants bikinis/tankinis are 'in' at the mo.

My headline did get me thinking about murder mysteries though - i think if i wrote one i'd start with the dead body and work backwards...

"Take my last book. One agent couldn’t accept in the main premise of a woman getting pregnant and not realizing until she gave birth."

I can't believe that. You frequently hear about such cases.

And as for the headline - in this country it would more likely be:

LOL, Juliet, i love your headline!

"The difference between fiction and reality? Fiction has to make sense." - Tom Clancy

I think that's a really interesting topic for discussion. It's often why I find the genre I write in just as tricky as writing literary like my first novel. In Fantasy, a kind of 'hyper-reality' exists, but it needs to be off-set with a certain realism too. If one takes the stance that ALL fiction is, in some way, fantastical, we should also probably accept that all reality is in some way fantastical, because all fiction is rooted in reality. Even the most bizarre alien or monster must be written from a human concept of what that monster or alien feels or thinks? Just a thought.

I did laugh at the image of you in speedos and a fishing net hat. A new fashion in swimwear?

Yeah, i guess that is my point in a way, that life has fantastical elements so why, in the more conventional genres, are we questioned when we put forward a more bizarre plot or set of circumstances?
And i agree, the fantasy characters we love are ones we can relate to, despite their unfamiliar appearance or ethos.

Erm, yes, i don't think the fashion houses will be contacting me any time soon. Possibly Vivienne Westwood;)

I like your take on the balance between reality and extended reality (what many people call fantasy). What you say adds weight to eliminating the sometimes rather daft process of insisting that a book is placed in a particular genre. Like you, my writing mixes reality with various other commonly used tags such as adventure, romance, fantasy, crime, humour - why can't we just have a a category of 'a good story'?

My recent book, Randolph's Challenge Book One - The Pendulum Swings, would, using normal categorisation tags, be considered fantasy (or as I prefer to call it extended reality), I suppose because it contains magic and takes place on a different world. But reading your article just made me think, once again, that there is more fantasy and magic in the real world than there is in my book.

Halleluljah to that, Chris. We all know a writer who's had the full requested many times, had wonderful feedback, but been told it won't be taken on because it can't be pigeon-holed.
I'm at the beginning of the process to find out if that is true of my wip.

If you haven't already find a place for your book, i hope you do.