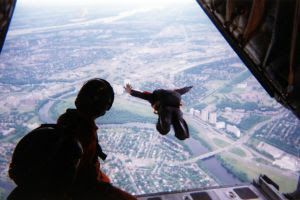 In my twenties I signed up for parachute training in a sweaty aircraft hanger, with off-duty firemen barking orders at the novices as we threw ourselves from gym horses in a risible approximation of the jump itself. Outside, in an abandoned aircraft shell, sprouting grass, we were taught how to position ourselves on the door-ledge and let go. Then our chutes were packed, harnesses strapped, bootlaces taped so they didn’t get caught in the parachute strings, and we were airborne.

Looking back, the effectiveness of the martial-style training alarms me. In half a day they’d cauterised our instinct to ask why or how. We couldn’t change our minds, they’d stripped us of minds to change. When my number was called I crawled obediently to the front of the aircraft and crouched in position. There was no door, just a square hole between me and open sky. The wind muscled in as though trying to push me back inside the plane. There was comfort in that. Then the engine cut out. The air was still. The plane was still. I wondered how it didn’t drop like a stone. A red-moustached fireman barked at me to loosen my grip on the doorframe but my bones and muscles felt like they were retracting inside me. I was inhuman, unreal. There was nothing left of me but fear.

The instructor swore later than he hadn’t helped me along, but when he yelled for me to go I sensed something light, like a fingertip at the base of my spine, tilting it forward, and suddenly I was out there in the immense, clear blue. I looked up at the plane racing away from me, then it was obscured as the chute opened with a roar of coloured silk. The harness yanked as the parachute took my weight and the world around cleared and stilled. A woodpigeon flew past, so close it felt like a companion. And the ground below grew larger and more distinct.

Please forgive the evangelical preacher tone of this post (ain’t Faith jes like that parachute jump!) but right now each time I sit down to write the sensations of that jump return. Paralysis at the enormity of the task, physical terror at writing to what feels like an impossible deadline.

A publisher wants to see the whole book by the end of August. Some of it is so ragged it may as well have been written in tongues, and my kids are waging a guilt war against the computer, standing outside the study during my allotted hour of writing time which they feel is rightfully theirs, to stage whisper to each other, ‘She won’t play tickle tournaments. She only wants to write her book.’ Each day I sit terrorised for what feels like hours but may only be minutes or seconds, staring at the black insects of words on the screen or page, unable to decipher them, and then suddenly I’m airborne, senses restored, able to appreciate a bit-part character or recognise how a scene must be re-pitched. But it’s that moment of sheer terror before beginning, that white-out of the mind that comes from pressure to perform which I need to overcome. Walking out onto the page is like stepping into thin air. And sometime a self-imposed martial command is necessary to tilt us into it, so we don’t scuttle, defeated, back to the safety of family and Facebook. But once there, the sensations are exquisite. It’s worth the risk.

I actually felt sick just reading that description of the jump. I am missing whatever gene it is that makes people want to do these things and find it utterly baffling [although very impressive].
Go for it, Susannah - you can do anything once you've done this.

What a fabulous post, Susannah. I could physically feel the process. Frankly, if your book is written in any way like this, the agent is going to LOVE it. You write like a dream.
Susiex

Thanks for the replies, and Susie thank you for that very kind comment on the writing.

Caroline, for an entire year after those jumps I felt invincible. It does give you an immense feeling of - as you say - if you can do that, you can do anything. Been feeling quite the opposite recently, so signed up for Go Ape, one of those horrible 'run through ropes fifty feet up in the air for three hours' things that my non-writing friends spend their lives doing. I'm terrified already, but hoping it's going to have that confidence-boosting effect.

You could try a tandem jump, Caroline. They're brilliant, though I must confess, I'd never jump again, not now I have children.

I'm like Caroline - probably more of a wimp. The day I passed my driving test I got my instructor to drive me home and only ever got behind a wheel about 6 times thereafter. So jumping out of planes is several thousand steps too farfor me.

But I agree with Susie - the agent will love it because your writing is so brilliant and if this one doesn't then the next surely will. I'm crossing my fingers for you.

I've never even taken a driving test. Far too cowardly. I'm terrified I'd be daydreaming some story and someone would walk out in front of the car and I'd not see them. Skydiving's OK because you're only responsible for your own safety, but someone else's... I'd rather take the bus and listen in on the conversations any day.

What a fantastic post. I lived the tension of the jump with you, and even more the race to finish the book. I especially love your exquisite choice of verbs.

In stage whisper - She really should stop responding to comments here and get on with the writing.

I meant to say good luck with the pblisher reading Cherys - though you may not need it -your writing will speak for itself...

And I meant to say - get on with the writing because I can't wait to read you book.

Thank you Rod and Fionnuala,

I'm SUCH a wimp when it comes to submitting work, I have a ring of hives right round my neck, as if my body thinks subbing is as scary as the noose. Where's sam when you need her? She's my subbing hero.

Much respect. I think I would rather get a thousand rejections than do one sky-dive! I can't even imagine the terror I would feel, I can barely go up in a plane without having hysterics. I hope subbing isn't quite that scary for you!

Lovely post, Susannah. Good luck with finishing the book; you'll get there and I'm sure the agent will love it.