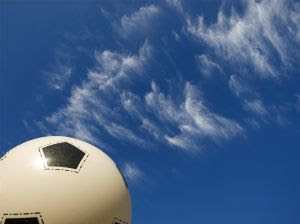 Over the course of the last few weeks the tension has been building in the Black household.
A hungry anticipation coupled with uncharacteristic optimism has taken over.
Yes, my friends, the start of the football season has arrived.
Those barren weeks of outlandish rumour are over.
Last season's disappointments are consigned to history. This year will be the one. There is everything to play for.
Those of us who follow a football team will recognise the wonderful feeling of the clean sheet. And those of us who write must surely understand that they are brothers in arms.
It seems to me that writing and following the footie are so similar I'm suprised Stevie G hasn't won the Booker.
Think about it.
The period before the season starts is where the imagination of every sports journo and humble fan alike runs riot. Grandiose plans are hatched. Winning the double seems all too real. It's not called the 'silly season' for nothing.
And isn't this just like those wonderful weeks for any writer before a project officially begins? Characters burn with joyous intensity. Subplots twist and turn like nude dancers. And the ending...
This story/book/script is going to be the best thing ever written. Hollywood is already on the phone.
Then the season kicks off. If the first few games go well then the promise of glory is ever nearer. If losses are sustained there is still time to fix things.
By Christmas things are less than rosy. The fan's unbridled hope has taken a battering.
The striker that cost more than the debt of an African state couldn't hit a barn door.
The writer too is at a critical time and feeling the strain. The MC has not glittered and the middle is flagging. The planned ending is starting to look a little overblown.
But the Writer ploughs on. He can change the formation, sack the goalie.
By the beginning of the Summer the footie fan is jaded. He can barely bring himself to turn on the telly. Not when there's an away game at Man United still to come.
The writer too is in the final stages. Things haven't worked out. At last he types The End and sends the thing off to his agent with the usual caveats. He takes a breather. Perhaps it's time to go back to the day job.
Then July arrives and among the sun screen he spies an idea. A fantastic idea. The sort of idea to bring the critics to their knees.
The writer starts to plan like a frenzied beast. Once again the silly season is here.
Then one day in mid August the writer sits at his lap top and starts all over again.
Afterall, there is everything to play for.
Posted by Helen Black at 06:00

Email ThisBlogThis!Share to TwitterShare to FacebookShare to Pinterest
Labels: Man United, the Booker, the silly season, the start of the football season, winning the double

Brilliant analogy, Helen! I think we support the same team.

Sometimes I think football saves me from the madness of writing...so long as it's going well.

You only sing when you're writing.

Oh God no. It's not that time of year already is it? Thankfully my husband is on the same team as me with regard to hating football. But you admit it to ardent footy fans and you are treated like a social pariah!!

I personally think that they should fit the footy around the normal TV scheduling and make the footy fans go to the matches or sky plus tham if they're that desperate to watch them. Why should us normal people have to miss our programmes for the football. It's only a game, after all. (Awaiting the flying footballs aimed at my head!)

But yes, writng is very much loke football, Helen!

Lovely analogy, Helen, although i'm not sure, living in a Newcastle United household, that last season's disappointments (ie relegation) are history!

Especially for the unpublished writer there is always the hope that a new project will be 'the one', without the pressure of having to achieve better sales or get a contract renewed.

Enjoyed reading this, Helen, though I can't stand football!

Loved the analogy, Helen. Julie - how can you say it's just a game? Even if you hate it, football matters because it has the power to touch so many people's emotions. Anything that does that is significant, even if it leaves you cold!

I enjoyed your blog, Helen, but I really hate football so much!! ;) Give me tennis or sailing any day!

Great analogy Helen. (Have to confess I'm so glad I'm not alone in the loathing of football!)