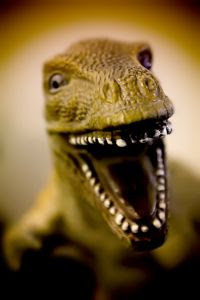 A six tonne, 40-foot predator roared at me the other day. I could smell its meaty breath as it bore down on me, its razor-sharp teeth the size of bananas ready to slash me to pieces. OK, I may be exaggerating about the breath and the bad intentions – but I really was that close to it, even if it was just an animatronic T Rex made of steel and latex. It was part of the stunning show Walking with Dinosaurs at the O2 centre in London. Having dinosaur mad children is not essential and I urge anyone who’s been hesitating to buy a ticket straight away.
But watching these huge, realistic beasts close up got me thinking about the nature of monsters. Namely, how easy it is to start thinking they’re waiting behind corners in real life. I’ll explain. I’ve been fretting about a particular work project for several weeks now. I felt out of my depth in the subject matter and had to do a fair amount of bluffing to turn it out, all the while worrying that I was going to be ‘found out’ and shown up in front of respected peers. It’s been a constant low hum of anxiety in my brain and yet it all ended up just fine. You could argue that I needed the adrenaline to ensure I gave it my all. But did it really help to worry so much? I doubt it.
And then there are other ‘monsters’ hovering at the edge of my consciousness. Like, what happens if my second children’s novel – currently being read in full by an agent – goes nowhere, like the first? Will I have to give up and take up a different hobby, like knitting jumpers with dinosaurs on the front? That beast has been too scary for me to look in the eye but that gives it half its power. You’ll have heard the phrase used in writing circles, ‘kill your darlings’. Well, I’m proposing that you spend some time slaying your monsters. Start right now. Whether it’s, ‘I’d love to do something with that story idea, but I’ll only muck it up’, or, ‘I’d like to try writing a novel, but the commitment scares me,’ or even, ‘I wish I could tell my family to give me space to write,’ why don’t you just walk right up to the monster, and roar right back at it? You never know, you might start seeing where the strings were hidden all along.
Posted by Caroline Green at 06:00

Email ThisBlogThis!Share to TwitterShare to FacebookShare to Pinterest
Labels: monsters, Walking with Dinosaurs

Thanks for a rather timely posting! My monster is people around me who think they're helping by telling me what I need to do to promote myself as a writer. My monsters are shaped like social networking sites and webpages, which makes them hard to describe! Against all monsters we have the pen of commitment and the shield of passion. Monsters - they don't stand a chance!

Ooh! Ooh! I'm going to see that show at Wembley at the end of August. I luuurrrvve dinosaurs - they're the best!! Anything with them in - I'm there!

Derek,
I really like the idea of'the pen of commitment and the shield of passion'.
Anne - you're in for a HUGE treat there.

Love this post, Caroline. Though have to say at the moment I'm squeezing my eyes shut and charging at the monster while waving my sword/pen around quite haphazardly...will that do?

I'm all for roaring back at monsters! The biggest monster of all, I think, is fear. When we are afraid we become powerless. So even pen waving is good!

We can tell ourselves we can't do a good enough job on a short story and there are plenty of writers out there who could do it so much better, and we can not start writing that novel we've had in our heads for years because we're just not up to it. But we are! And we can. We just have to roar at the fear monster and throw a nice piece of rump steak at it to distract it while we do a ninja attack on our writing!

The poet Rilke said:
"Perhaps all the dragons in our lives are princesses who are only waiting to see us act, just once, with beauty and courage. Perhaps everything that frightens us is, in its deepest essence, something helpless that wants our love."
Susiex

Thanks Emly and Julie and Susie for your comments...that's a great quote Susie. I also love the haphazard pen and ninja attacks!

Oh yes oh yes. Kill the monsters. This is a fantastic idea. Think I'll borrow one of the kids' pots of slime, as my monsters are all wobbly fears about how useless my work is. Will set that goo on the desk and roar at it. Might have to evacuate the neighbourhood first.

Thanks Susannah...yes, I have that monster too. I always knew there was a use for those pots of slime, if only I could think of it...