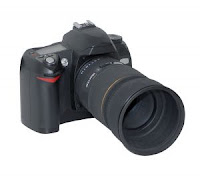 My grandma was one of the most photogenic people that ever existed. She was no famous actress or model, but whether she was in the local photo parlour in her 20s or being snapped with a disposable camera in her 70s, she looked effortlessly beautiful.
Unfortunately grandma did not pass on this trait to me. When my book got accepted by a publisher, I realised with trepidation that I would need some publicity photos, and that this was going to be rather a challenge.
I dread having my photo taken for several reasons:

1. I'm not very skilled at applying make-up. I've never really worked out how not to look like a square 12-year-old raiding her mum's cosmetics in an attempt to fit in with the cool kids, and ending up bogwashed for daring to think she could look good.

2. Although I have some nice clothes these days, they only look nice up to the point at which I put them on. The other day I went into town and was about to be kind to the spaced-out homeless person wandering around M&S to keep warm, before realising it was actually a mirror.
3. If I smile, I look like a hamster that doesn't quite know what's going on.
4. If I don't smile, I look like Kathy Bates in Misery.
So – what to do? I didn't fancy going to a professional photographer, because my only experience of photographers was the bossy ones that bark orders at weddings, and one of my many weaknesses is that I don't respond at all well to being told what to do. Plus no matter how professional the photographer might be, I would still be me, with gormless moon-face, bad make-up, uncool outfit and DIY non-haircut.


The next option was to use some existing nice photos from my younger days. Or rather, this wasn't an option, because people simply don't tend to bother snapping pics of me – whether they fear for the life of their camera lens or whether I'm completely invisible, I'm not sure.
(I don't think I'm just being paranoid here – this state of affairs subsequently became apparent at my book launch, which escaped being recorded for posterity altogether. I even made a point of giving a family member my camera and asking him to take some pictures of me for my website. How many did he take? None, that's how many. I don't mean 'none that I liked' or 'none that came out well', I mean literally not a single one.)


The saying goes – if you want something doing properly, do it yourself. In my life, this is usually modified to 'if you want something doing at all, do it yourself.' So several months before publication, I worked out how to use the timer on my bog-standard camera, bunged on some slap and a vaguely presentable shirt, and took lots of pictures of... ME!
The good thing about taking your own photo is that no one is looking. You don't have to feel like a complete idiot. If you want to try a 'serious academic' one, you can. You can chuck on a bit more make-up or change your hair without keeping anyone waiting. And you can just press delete when your 'pouty Nigella' effort turns out like one of the plasticine pigs off Shaun the Sheep.
The other good thing is that there's no one to get bored while you reject 99.9% of the pictures. Eventually, I got an OK set of photos that I could just about tolerate. I downloaded them onto my brand new laptop and got as far as putting one on my website.
Then the brand new laptop died. Toshiba immediately replaced it, but the pics were gone. I've made several attempts since, but to no avail. I am not photogenic.
At least grandma gave me some of her intelligence – that's something to fall back on, I suppose.
Posted by Caroline Rance at 06:00

The Katy Bates comment made me spit out my tea. Hilarious.
I know I'm often tempted to get a body double for any photo stuff. Definitely got a face for radio.
HB x

Methinks that is unjust and not a fair assesment of things... She is a fine and pretty novelist lady.

I've seen some lovely photos of you and took some at High Wycombe Waterstones for you - at least one of those looked good (in my unbiased opinion as the photographer :-D) I never once "feared for the life of my camera" either!

As for the "cool kids" who cares what they think? Don't give them a second thought except to answer their question "Do you want fries with that?" when you bump into them at lunch ;-)

You do realise I would gladly act as photographer for you any time and for as long as it took to get photos you liked?

Love the piece, Caroline, and agree with the subjective sentiment - but completely refute its objective application to your good self!

I SO relate to this! As soon as anyone turns a camera in my direction I turn into a grimacing lunatic! But the professional photographer thing worked. She came round to the house and wandered aroung taking photos of me in different places and in the end I got bored and forgot to pose. Result, a photo which friends and family think is almost like me.

I also often look grim in photos and my husband says, 'You're making that weird face again...' when a camera is aimed in my direction. I agree, FWIW, I don't think others see what you see in person, Caro!

Well I've met you Caro and think you are gorgeous!

I've just written on this very theme for a women's online mag - (I promise I didn't pinch the idea from you.) I have a special mirror face but can't do it for photos. There's one out there of me looking exactly (well a bit) like Jabba the Hutt. Hmmm! Loved the piece.