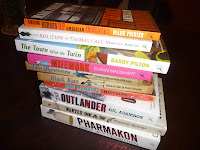 I'm a member of a book club. It's not the discussion group kind, and it's not the postal kind where they lure you with free hardbacks and then make you buy expensive stuff you don't want for the rest of your life. And when I say 'club', I don't mean anything exclusive (obviously, as they let me join.)
This book club takes place in an enormous warehouse run by a company that buys remaindered stock from publishers for absolute peanuts and flogs it on to discount bookshops. Once a month, they open the doors to everyone who has paid the princely subscription fee of £2 a year, and we can choose from thousands of titles of every genre at a bargain 20% of the cover price.
As a writer, I really ought to disapprove of this. The experience of wandering for hours among shelves of unwanted books ought to be depressing. The amount of hard work, time and emotional investment that has gone into writing them all is enormous, let alone the persistence that got them published. And yet they sit unloved in this last chance saloon, where someone might or might not think they are worth a quid.
Not surprisingly, the place is teeming with celebrity biographies – vast quantities of Ashley Cole's My Defence sat there for months before presumably being pulped – but the famous mingle with the not-so-famous and much of the stock is by writers I identify with as people who put in the hard graft and went through the slushpile. In a particularly poignant moment, I saw a stack of books that had all been signed by the author – and still no one had bought them. Sometimes I spot books by writers I know, and have occasionally rescued copies just to give them a good home.
It would be easy to become despondent and think it's really not worth trying to add to this book mountain. What's the point of spending years crafting a story only for it to end up as a disposable commodity that someone will only buy because it's cheap enough to give to the charity shop if they don't like it?

In addition, none of those thousands of authors will make any money from books bought here. It's not exactly fair trade. The publisher recoups a small amount on their remainders but the poor soul shivering in a garret, eating Aldi Instant Mash and breathing on their ink to stop it freezing, won't be sailing off on a luxury yacht any time soon.


So, as a writer, I really shouldn't approve. On the other hand... I'm also a reader, and this makes the place an absolute paradise. When getting purchase-happy and chucking anything with a nice cover onto my trolley, I've discovered some brilliant authors I might never otherwise have heard of. I've found obscure stuff that would never make it to the local library, and tried out many a book that I wouldn't usually have bothered with. This 'last chance saloon' has been a first chance for me to become a fan of certain writers... and I've gone on to buy their new books.
If I discovered a pile of my own books, I wouldn't therefore be too disheartened. I would rather they were read than destroyed, and they might even reach someone who would appreciate the next one... that's if I resisted the temptation to buy them all and bring them back home!
Posted by Caroline Rance at 06:00

I know exactly where you're coming from Caroline.

On the one hand I love buying my books cheaply through Amazon, or three for twos, BOGOFs etc...and yet I moaned like hell about how much my previous publisher was prepared to sell my book for.

Yes, I was just about to make that exact point re Amazon. Sounds like a brilliant club, Caro...although poignant. The land of lost books...

I struggle with this dilemma too, making sure I buy books full price if I know the author, but leaping on bargains otherwise.

I agree that it's better to be read than pulped though!

I think, as you point out, places like this can give us a fantastic opportunity to find some great hidden gems by writers we'd never previously have heard of.

I used to love rummaging through book shops to see what I could find, but now like everyone else I do most of my buying on-line and then tend to stick to authors I know I like. While I know writers aren't going to get paid for the stuff people buy at your book club, if there is the chance they could be discovered by a new reader (who could then pass their find onto all their friends)then isn't that a good thing? Ok,it's only a small chance - but it beats having their books wasting away unseen in some dusty stockroom. Doesn't it...?

It's a bit like the second-hand-bookshop dilemma, isn't it? So tempting, and yet you also feel guilty because the authors aren't benefitting. I like your point that it might introduce you to new authors you love, which might mean buying their next book.
Susiex

Sounds brilliant. It should be a crime to destroy new books. How do I sign up?

Thanks for the comments, everyone. I was there today and have added a pic of the ones I bought for myself (did some Christmas shopping too).

I forgot to mention they also have free coffee and biscuits!

In many ways, the place inspires me to write rather than daunts me as it reminds me just how many other authors are out there having ideas and putting in the work. If I don't keep up, it's only a matter of time before I see a book almost identical to what I'm doing.