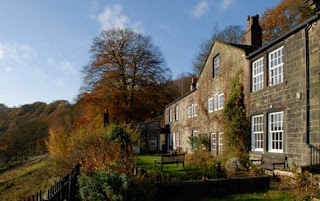 At the risk of sounding slightly gushy, here goes. Last week I finally did something I've been meaning to do for about twenty-seven years, give or take a decade.

I finally dusted off my polo neck sweater and pipe and headed off to Ted's place in the country.

Lumb Bank is one of the four Arvon houses, in this case pitched on the side of a valley in a strange part of the world called Yorkshire. It's strikingly similar to Malaysia or Vietnam, complete with spiralling columns of mist in the mornings and wall to wall trees. The picture above that I stole from the Daily Mail hardly does that justice, but if the photographer had turned ninety degrees to the left he would have fallen off an almost sheer drop into prime rainforest. Geography was never my strong suit.

Anyway, I met there with fourteen poets including the tutors, Ian Duhig and Amanda Dalton. I'd chosen the place because it was the only Arvon centre that could offer me a single room that week. In other words, I had limited expectations. In discussions with Jess before I set off I decided that, if it didn't turn out, I'd spend my time writing and avoid the classes. After all this was my week.

So imagine my surprise when this turned out to be one of the most inspirational weeks I couldn't imagine. I'm lost for words - now. Perhaps that's because I've been in the summer house all day working on material I wrote last week - wrestling with a particularly resistant poem that won't accept its destiny, to be massaged into heroic couplets.

Ian and Amanda were fabulous. Their generosity of time and spirit was humbling. Everyone kept saying that we were a special group, and that immediately made me suspicious, but we were.

One day, when the mist settles on Lumb Bank I'm going to blog about this properly - tell you why it was so special. For now, all I can offer is the first sonnet I ever wrote, thumped out in a writing exercise when we were given twenty minutes to come up with something, anything.

I found you at the bus stop in the rain,
no transport there so we agreed to trek.
I never thought that we would meet again,
complained about the dripping down my neck.
Your words flowed as a torrent on the route
how you loved the damp, the misty air
how rain could clothe your body like a suit –
the water was the perfume that you wear.
I couldn’t pay attention to the stream
and struggled for impressive words to say,
pretended that I heard this in a dream:
the rain it raineth every single day.

But even after all these cloudy years
the smell of rain can still bring me to tears.

Alright, I admit I changed the name when I returned to England. Originally it was called Rain Girl. But we all know that a poem should have a pretentious classical title. I prefer Rain Girl too.
Posted by Roderic Vincent at 06:00

Sounds like a magical week. What a dreamy setting! Loved your sonnet and the pretentious title. Looking forward to reading more about Dumb Luck, oh, just re-read original post - Lumb Bank in a later post..:)

One of the best bits was a walk to Heptonstall to seek out the grave of Sylvia Plath. I made that pilgrimage with an Australian poet called Cate and we loved the decadence of spending all that time systematically combing the graveyard until we found Sylvia. The grave itself was covered with pots of pens and pencils.

Sounds wonderful! I one of the best thing prose writers can do is give poetry a whirl - so good for you, and so liberating.

Hi Emma, yes, liberating to the extent that I have no intention to go back to the novel, for now.

Great post... What a wonderful week. So glad you wrote about it.

Helen, we'll see. For now I'm going wherever the creative energy takes me. As I'm turning out almost one new poem a day at current production efficiencies, I think I should go with that. My only goal as a writer is to enjoy it, and today I'm loving every minute.

YAY, Rod!! You - and clearly Lumb Bank - are an inspiration. So glad it was so extraordinary.
Susiex

Ah, I'm so envious...I've always wanted to go on an Arvon course.

Um... what or where is Hyades? Pretentious titles are all very well if the reader understands them and can do a smug little nod at them... I am not nodding, Rod!
oh, I liked the Rain Girl poem too, btw. 20 minutes, eh?

Bravo! Great that you had such an inspiring time. I've booked for a course there in October. Can't wait. Look forward to reading more about your trip.

I love posts like this where the writer is brimming with enthusiam and inspiration and every word shows it.
Glad you had a great time ROd and so pleased that you are happy writing whatever you feel like in the moment.