The Authenticity of 'Now' 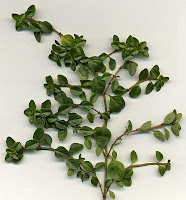 There's a scene in my first novel where the main character, a nurse, sweeps herbs over the hospital floorboards in an attempt to mask the smell of the patients. It's no big deal; just part of what she happens to be doing at the time, but several readers have mentioned it as a fascinating historical detail; an example of how carefully I must have researched the era.
But the truth is... I, er... made it up. I don't know whether it was routine practice for 18th-century hospital staff to spread herbs on the floor – but equally, there's nothing to say that one resourceful individual in one hospital wouldn't try it out.
Is this, therefore, historically accurate or not? I believe it to be authentic – herbs were around then, brooms were around, smells were around, it makes sense to use the former to deal with the latter. But what if someone, having read the book, starts telling their friends the interesting fact that 'in the olden days, hospitals used to put herbs on the floor!' Is it unfair on readers to make them believe in something when it's just an illusion?
Personally, I don't think it's unfair at all – history involves a lot of individuals doing individual things, and sometimes those individual things aren't what a GCSE history book says 'the Georgians' (or whoever) homogeneously did. In fiction, what's important is whether something is possible and believable within the context of the time.
In a recent piece for the Guardian, James Forrester pointed out a mistake in an un-named book set in the 14th century – the narrative mentioned that there were 'no priests within a three-day ride,' and Forrester's knowledge of history enabled him to work out that there would in fact have been several thousand.
Now, I don't know what this book was, and chances are the author really couldn't be arsed to get the facts right, but unless the story has a modern, omniscient narrator, then it's being told from a historical point of view – the point of view of someone living in their own version of 'now'. I don't know about you, but in my 'now' – the 21st century – there is an awful lot of stuff I'm unaware of and an awful lot of stuff I get wrong. Should a 14th century character really be expected to have accurate details about every single thing that is going on in their 'now'?
Maybe the narrator has no idea about the priests, but makes the statement anyway so as to appear authoritative. Maybe they've been told this by someone with an ulterior motive, and are naïve enough to believe it. Or perhaps the statement is an intentional teaser for knowledgeable readers; a hint that something is amiss and that the narrator has intriguing reasons for giving the wrong information. Maybe it's a way for the author to conspire with his or her audience, and reward the alert ones with an extra clue to the mystery.
Readers are quite entitled to enjoy feeling clever when they perceive historical inaccuracies, but there's also a danger of congratulating yourself so much that you miss out. If the 'mistake' turns out to be an early warning of the political machinations that ultimately endanger the hero's life, then it's even cleverer – and more satisfying – to have used your superior knowledge to work that out.
Posted by Caroline Rance at 06:00

You are making history.

Very thought-provoking post, Caro. I've always veered away from history in my writing for the very reasons you cite. Somehow, this 'now' feels more flexible than that one!

Really interesting, this. I too have always been a bit scared of writing historical fiction in case I get any details wrong, but this has made me think. I saw Sarah Waters talking about her WWII book Night Watch and she said she was much more nervous about this one than she had been with her Victorian books because people were still alive from that era and she thought they might berate her for getting any tiny detail wrong! So she says she researched the recent past even more thoroughly than she would usually...

See, this is why I too veer away fronm historical fiction - all that intense detailed research - and what if you get it wrong? But the thing is I believed the herb thing when I read it... I never thought to question it and TBH I dont really want to be a person who would? The fact that I now know it to be 'fiction' sort of adds to the whole fictional story for me rather than detracts? I do think though for historical events and their surrounds - research of facts is vital?
Does any of that make sense? I've been awake since half five!

Oh, it is a minefield, and so important to get the research right for the 'bigger picture' as there's always someone who will make a fuss about things not being factually correct.

Personally, I really like all the research that goes along with writing historical novels but, then again, a novel is fictional and I'm entirely in agreement with Caro - the story is a personal view and as such the author has a perfect right to 'concoct' events here and there. After all, that's half the fun!

It's also something I'm struggling with right now as I'm in the process of writing Endnotes for my novel to clarify what's real and what's not. There's been a lot of 'mixing'.

Very interesting and I'm not quite sure where I stand.

I'm reading Wolf Hall at the moment, and I guess just assuming that the historical detail is correct. What they wear, what they eat etc
That said, I know it's the author's take on what might or might not have happened.
HB x

Oooh I'm so on the fence with this - and like others, this is part the reason I steer clear of anything too 'historical' but equally I'd probably expect a historical book to be accurate - but then I wouldn't go to the trouble to check if the facts were right or not either... oh it's so difficult, isn't it? I got told by an agent once that the supernatural fiction thing I'd written didn't ring 'true'...ffs! so now I'm even more confused!

IMHO, anything goes in fiction. Seth Graham Smith turned Abraham Lincoln into a vampire hunter. In E. Kostava's, "The Historian" Vlad the Impaler was a vampire. Yes, I know Bram Stoker started that one, but I think you get my drift.

This said, I'm in the throws of writing a historical fiction. The book is a horror or supernatural thriller (unsure which genre it falls under). Part of the story takes place in the Yucatan during the sixteenth century.

My research included a visit to the Mayan pyramids. I spoke with a couple of experts in the field of Mayan Studies and read several books on the subject. However,for the purpose of progressing my plot, I've taken artistic license with history. If readers want a factual account of the ancient Mayans, then they should refer to non-fiction.

Yes, some hospitals did use herbs on the floor! The essential oils in herbs like thyme and rosemary are antiseptic as well as covering nasty niffs. The 'bird beak' masks worn by doctors during the plague were stuffed with such herbs to prevent infection.