Short Stories are Everywhere. Look, there goes another one!

I’ve had two short stories published. In my life. Which I think is pretty bad going considering how much ‘life’ I’ve had. The first one, ‘Sidney’, a humorous homage to my very best friend in the world, was printed in our local free newspaper which probably doesn’t even count. I was 20 and I’d written it aged 18. Although I did have to go and have my photo taken for the little Biog that went with it, so I did feel like a minor celebrity briefly. And the real ‘Sidney’ had many pints bought for him following the publication that week. In hindsight, I think the pints were more commiseratory than celebratory because of how I’d portrayed him.

And I had a lovely letter back from the (then) Editor of ‘Woman’ magazine, to whom I’d also sent ‘Sidney’. Telling me that whilst he’d enjoyed reading it, he didn’t feel it was particularly suitable for their style but he’d enjoy the chance to meet up and discuss the possibility of future commissions.
Of course, to receive such a response today would have me clawing my way to the front of the ticket queue at British Rail, demanding I’m taken to the IPC building immediately. If not sooner. (Not really – I’m not like that – I’d just queue up like everybody else sweating profusely and imagining the worst).
But back then (wwwaaaay back then) my parents had other ideas. I’d only ever been on a train once, and that had been with them and my brother as part of a ‘See Your City’ day-trips we’d taken one summer holiday. I think I’d been 15. So I was kind of green behind the gills and not very travelled and, of course, still ‘under their roof’. And there was, as they told me “plenty of time to go gallivanting around London when you’re older”. Little did they know.
Little did I.
Maybe if I’d been a tad more resolute and single-minded I’d have just done it, sod the parental consequences; but I was very eager to please in those days and simply complied.

The second (and last) short story I had published was in the TwitterTitters book, written and sold as part of comic Relief, called ‘Killing Kevin’. I wrote that about 5 years previously too, and sent it on the usual rounds of magazines. But I just got back the same response my ‘Not-So-Secret-Agent’ always seemed to get when she submitted my shorts and that was “not sure there is a market for this type of story”. Clearly my style hadn’t changed. Still unmarketable. At least I was consistent!
So I was stunned that ‘Killing Kevin’ had been chosen to appear in this celebration of humour and for such a worthy cause. And my story appeared alongside such greats as Cally (“Heaven Can Wait”) Taylor, Dave (co-writer of Phoenix Nights) Spikey and Lane Mathias, whose blog I love. I couldn’t quite believe it.
I still flip through the book occasionally and marvel when my eyes fall upon page 49. There’s me. And there’s Kevin.
Which proves there’s a short story to be found everywhere. I grew up with ‘Sidney’ (we’re still friends) and even though I didn’t actually kill ‘Kevin’ there were times when all I did was sit in front of my accounts screen at work, imagining how I would kill my boss, given half the chance (and a heavy-duty stapler) because he angered me so much. In fact the day I wrote the story, he had angered me more than I can ever remember being angered by a boss*.
Ever.
So there’s a short story waiting to be written wherever you are. Sit back, reflect; go with your feelings and then get them down on paper/screen. 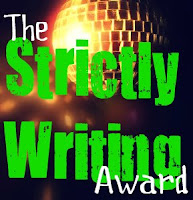 Oh, and then enter the Strictly Writing Short Story Competition, of course. That was the idea of this post, after all!


*He made me "redundant" a week later and I still wonder if this was something like divine intervention for ‘killing’ him off in my head!
Posted by Debs Riccio at 06:00

Not only is there a short story everywhere, but there's a market everywhere if you turn over enough stones. Believe me, I've had one or two 'unmarketable' stories accepted eventually, after much internet-trawling and tearing of hair. :D

Interesting post, Debs. I must admit I'd rather write a 150,000 word tome than a short story! So much easier.

The only short story I ever had published was for Jackie magazine (I was 12 at the time). And it even had an illustration!! Well done for Kevin, and may there be many more Kevin experiences for you (publication, not bosses).
Susiex

You should definitely feel proud of Kevin, Debs, and as Susie says, here's to many more...

I used to write short stories as a kid but I never read them as an adult. I always think it's one of those things I must get round to doing. Which is guaranteed to put me off!

When I dive into short story collections I'm hooked for hours. Maybe it's the after math of studying the short in college, but I find short stories perfect for learning the craft of writing. I must look up TwitterTitters! What a name!

Thanks for the tip. I'll go check it out now.

I tried the link and it worked for me - try this: