The weird and the wonderful 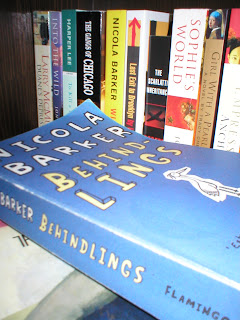 While chatting recently to fellow Strictly blogger, Rod, I mentioned the Cambridgeshire-born author Nicola Barker and went on to praise her quirkiness. I first stumbled upon her in 2008 after seeing one of the rather attractive covers of Darkmans – the one which features a court jester. And I ordered the book from Amazon because it looked cool and original. Despite being 838 pages long, I was engrossed from the beginning, partly due to the unusual use of language. We are introduced to oddball characters Beede and Kane, a father and son who work in a hospital laundry and deal in prescription drugs respectively and who, despite living in the same apartment block, are estranged from each other. Set in Ashford, Kent, it's a book populated with characters who are quite simply, bizarre. I'm not even going to attempt to cobble together a brief synopsis, but the weird and wonderful characters, who are so 3D they leap off the page, include Kane's ex-girlfriend, Kelly, Gaffar, a Kurdish refugee who works for Kane and is terrified of salad leaves, Elen, Beede's chiropodist, Isadore, her husband, and their son, Fleet, who is constructing a model cathedral from matchsticks.

The book was shortlisted for the 2007 Man Booker Prize for Fiction and the 2008 Ondaatje Prize - and quite rightly so!

My interest in Ms Barker's books doesn't end there. To whet your appetite, her previous novels include Wide Open, which is set on a nudist beach, a wild boar farm and a nature reserve on the Isle of Sheppey, and which feature her array of idiosyncratic characters. There's also Behindlings with central character Wesley who is stalked by a bunch of weird outlandish people including Josephine, a nurse and environmental campaigner, the scandalous Katherine Turpin, and Ted, the island's estate agent, all of whom have their own reasons for following Wesley.

Or there's Clear, narrated by a young man who is drawn to watch David Blaine suspended in a Perspex box above the Thames.

I've just started The Burley Cross Postbox Theft, a book which is comprised of a series of letters. I recently read an interview with Ms Barker in the Guardian in which she talked about the origins of this comically absurd book.

Apparently a few years ago friends of hers applied for planning permission to make amendments to their house and Ms Barker wrote a letter penned by 'the planning office', requesting them to put up a partition in their living-room. She said in the interview that she thought nothing more about it until sometime later when her friends phoned after realising she had faked the letter. Apparently they were furious. She tried to make amends when she heard about their problem with people hanging plastic bags filled with dog poo on their hedge, so she decided to write something about dog waste and legislation, in a form of letters.

And so the epistolary Burley Cross Postbox Theft was born. In the book, the village postbox is broken into and its contents, including 26 letters, 22 Christmas cards and nine applications for a remedy designed to cure erectile dysfunction, were placed in a bin bag and dumped in the backyard of the hairdresser. And now, PC Topping must sort through the letters. It seems everyone is objecting to everything, no matter how mundane - from dog poo to speed limits, planning rules and who gets to be Jesus in the Christmas play. It's all a bizarre mix and over time, the reader realises the incidents are in some way connected. It's all good fun and if you enjoy a quirky read which raises a wry smile, then Ms Barker's books should be on your list.

Her novels make compelling reading, given that the characters really come alive. They even stay with you for some time well after you've closed the books. In each story you'll find the common theme of sympathy for the underdog or oddball. Having lauded her brilliance, Ms Barker is not what I would call a commercially successful novelist. But she has that x-factor that not a great many contemporary writers have.
Posted by Gillian McDade at 06:00

Oooh I love the sound of these books - thanks for the recommendation and such a compelling review of the postbox one - there's something about a bit of background to a story that will tip me over the edge!

These sound fabulous - I'll look out for her. Mind you, I'd be pretty furious if my neighbour faked a letter from the planning office!
Susiex

I read about that too - found it most amusing. I've always liked the idea of her stuff but for some bizarre reason, have never read anything by NB. I think I'd better rectify that!