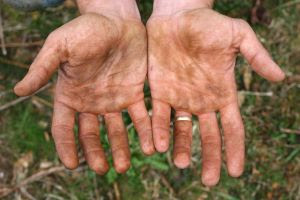 I’ve always been interested in spirituality and personal development, but there are a couple of things that rile me:

1. Reference to The Universe as in ‘The Universe will provide...'
2. Any mention of The Secret: I hated this film, particularly the angelic chords which accompanied each speaker’s pronouncement, and the way they portrayed The Law of Attraction by showing a girl yearning for a gold necklace in a jeweller’s window, and - having presumably discovered The Secret and applied it - the said necklace being placed around her neck by a tall, dark, handsome man.
3. Being told by people to Just Let Go.

Forgive me. This is cynical. In fact I do believe, wholeheartedly, in certain energetic phenomena. And I do believe that there is an intelligent force at work in life. It’s just that sometimes truths deteriorate, through over-use and under-examination, into lazy cliches.

I’m preoccupied with Letting Go at the moment, since I may be selling up and leaving my home of almost 7 years in Cornwall and moving to…er, I’m not sure where yet. I look at my beautiful little house with its direct views over the river, and wonder – sometimes - what I’m doing. No doubt I will also need to look at each of my possessions and decide which to take with me and which to let go of. Some things are easy: the clothes that are old, no longer fit or have never been worn; the books I know I’ll never read again. But what of the lifetime’s accumulation of journals which have accompanied me everywhere, yet which I’ve barely looked at since writing them? What of all the paintings and drawings which will never be sold or hung but which represent years, collectively, of work? What of the four or so printed drafts of my first novel?

Which brings me, somewhat circuituously, to my point. I was saddened to read a blog post by Ian Hocking, author of Déjà Vu and a further three novels, all of which his (very good) agent has tried hard, but unsuccessfully, to sell. Please drop over to his blogsite, This Writing Life and have a read. Ian has decided to call it a day. To let go of writing with the aim of being published, after fifteen years of striving, and - with his first book - succeeding. The right decision? Who can say. A forever decision? Ditto. This may be one of the hardest examples of letting go. And there’s no ‘just’ about it. In any sense.

Have you ever thought of ‘just’ giving up writing? Have you ever managed to do so? Can you imagine ever wanting to? Writing demands sacrifice, effort, energy, passion and time. As Ian says, it also makes demands on other people in the writer’s life – the partner, the children, the friends. It demands a certain wholeheartedness, at least whilst it’s being practised, which necessitates shutting out the world. And if all this effort and energy is directed into a practice which is not rewarded in the traditional sense, just how long can someone continue to do it? No wonder so many writers squeeze their writing into the fag-ends of their days so that others won’t be too inconvenienced. No wonder they practise their writing as if it were some form of guilty secret, carried out late at night while the family sleeps, early in the morning before they wake, or during precious moments while the baby naps, the children are at school. No wonder that there comes a time when a writer decides it’s time to let go.

The thing about letting go is – and yes, I know this may be seen as another new-age cliché, but it’s one I recognise and believe in – it opens up a space for new things to enter. The I Ching calls this the empty fertile space. Without such spaces in our lives, new things cannot be born. We may be full, but we aren’t fulfilled. So I wish Ian Hocking everything fresh and new: I wish that his spirit may be refreshed and his writing self renewed. I wish that what he next gives birth to is his greatest work so far – whatever that may be.

Ian Hocking’s decision is courageous. The word ‘courage’ stems from the word for ‘heart’. It takes courage to write. And it takes a very particular kind of courage to stop.
Posted by Susie Nott-Bower at 06:00

I often read Ian's blog and I think it's enormously sad that he's giving up.

However, he's been slogging an awful long time and has shown a fortitude that I'm not sure I could.


I'm pretty sure I'm not that sort of person.

First, I don't have any faith that the universe or some other great entity will provide me with what I want. That is something I must do myself which necessarily involves my taking the lead with my own life.

Very interesting post. It's really made me think on this sunny Friday morning.
HB x

Susie, your posts are always beautiful essays that never fail to move me and get me thinking. I read Ian's post and would also like to recommend everyone to read it too.

I love the idea of the "empty fertile space". It may go a long way to explaining why many women start to write for the first time soon after they've had their first baby.

Good luck with your move. Hope the right place to move to turns up soon!

Don't get rid of your journals! At some point in the future - maybe the distant future - you will want to look at them again.

Susie, what a thought provoking post as always. I'll pop over to Ians later to read - or will I?? Maybe I dont want to read about someone giving up even though I completeely get it?
Because I too have been in that awful space for too long "WTF? What am I doing slogging away at this for? etc etc"
BUT...
I have (and yeah I believe the 'universe' or me being at one with my 'self' or whatever the heck you want to call it when we make more 'guided' decisions) decided that I cannot give up writing. In deciding this, I've decided not to continue with publication in mind. I am truly trying to get back to writing because I want to. Because I have a story I need to get down on paper. Because I have characters who need to be 'made flesh'. Put simply my itch needs scratching. I've also come to the conclusion that if I'm going to spend time scratching it, I'm going to do it with a positive attitude and a self belief that thus far has eluded me. As for publication? It would be nice but for now, my next goal is to write the very best book I can. And if I'm honest, I haven't done that yet.
Sorry for rambling but I did say that this had been thought provoking!

I read Ian's blog but it made me so sad, I'm not sure I got to the end.

I know I would never give up writing...I feel unhappy and unsettled when I don't have a project on the go. Whether I may have given up SUBMITTING it at some stage is another matter...

I want to echo what Ellie said...don't get rid of those journals!

Thanks for the very thought-provoking comments.
Helen, I think your attitude is extremely healthy!
Thanks, Geri. :)
Yay, Fionnuala - I don't think you can do better than writing with that attitude - wish I could!
Ellie and Caroline, I doubt I will let go of the journals, but I really do need to read them or something...
Susiex

Thanks for writing this post, Susie. I found it quite moving. I do hope my blog doesn't depress too many people! In the end, it's about doing what's best.

Wow - what a lovely and timely post, Susie. I've been thinking and 'trying' to give up a lot lately. I know it demoralises me and enough stuff already does that without me making it worse... but still I return to it and still I yearn for it to be a success. The more 'meh' books I start reading, the more I'm convinced they're rubbish (to me) for a reason. I don't like giving up, because that's too easy and I always feel like I'm missing Something when I don't write. I have to. Echo Fi. Going to read Ian's blog now to see what he has to say. great post.

Ian, lovely to see you here. I so hope that your 'space' will prove to be fertile and fulfilling.
Susiex

Thanks, Debs. :)
You'll have seen by now that Ian's post talks about the 'I could do better than that' angle. Sooo frustrating, isn't it?
Susiex

Letting go is hard but sometimes it's the only way to move forward. We are so adept at gripping on to things even though we know they no longer serve any purpose in our lives. I congratulate Ian on having courage in his convictions and for having the strength to let it go - not the easiest option by far.

I agree with Helen Black, you have to work for what you want in this life. I don't think there is some higher being presiding over us giving us what we want or what we don't want. I am fast coming to the conclusion that it's down to what we do and being in the right place at the right time.

That's so sad about Ian. Letting go is enormously hard.

It took me nearly 3 years to accept that my first-ever novel was never going to find a home and give up on it, yet as soon as I did new ideas flooded in. I've never seriously thought about giving up ... yet. But who knows, in another fifteen years I might feel the same way as Ian.

Good luck with your move.

Julia, I so agree about letting go sometimes being the only way to move forward.
And Karen, it's really heartening to hear that new ideas came when you let go of your first novel.
Susiex

An emotive and important subject, Susie. And I say this as the writer of three unpublished novels now, about to embark (happily so) on the fourth, with my first novel about twenty years in the making.

The trouble with human beings is that they're conditioned to look for or create patterns. We like order and where we can't readily see it, we impose our own sense of order. When we see a writer who has been successful, we sift the details of their experience, in search of 'the rules'. The truth - simultaneously both painful and liberating - is that there are no absolute rules.

We're not all going to the prom, but that doesn't mean we won;t end up somewhere equally interesting, at some point. Letting go is only half of the equation; in letting go, what is it that we're embracing instead? That's the biggie!

Thanks, Derek. That was really inspiring. :)
Susiex