Lately, I’ve been wondering if I’ll ever write again. I’ve taken a break from feeling that I ‘should’ do this and I ‘should’ do that, in the hope that the muse will just return, take over and restore order to my messy mind.

Having ‘failed’ in my attempts to be published in the traditional route, okay, ‘failed’ is tough on myself, when I’ve very nearly made the cut a few times, I’m still now faced with a few options

See why a break is a good idea? 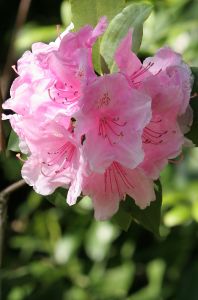 In taking a break from writing every day, or feeling that I ‘have to’ do/finish a certain thing, I’m slowly finding the joy in the little things again. The things that perhaps inspire people who want to write, to do just that. I’ve only just begun to feel this and I don’t know if it’s a mere tremor of hope, or if it’s the beginning of the crawl from the abyss, but I can feel it...

I’ve started to notice the beautiful shades of the rhododendrons in the garden. I lay in bed yesterday morning, listening to the rhythmic sound of the rain dancing on the roof. When I spoke with the postman this morning, I noticed he wears very thick glasses and I wondered if he’d been on the end of nasty name calling in school. Placing my mug of tea on the dining table, I put it on a coaster, not wanting to water mark the table and found myself wondering why trees never get water marked from the rain.

In short, I think my senses are waking up.

I had gotten to the point where everything I did, writing wise, seemed senseless. By that, I mean pointless, unfulfilling, crap whatever, but I also mean sense-less.

I’m not there yet. Not by a long shot – the writing break still applies. But in beginning to hear and see things differently, in wanting to savour touch and taste, ideas are starting to form and I feel hopeful.

If I take it slowly, bite sized paragraphs on nothing in particular, just because I feel like it. Maybe, just maybe...

Are you sure you're not channelling my subconscious? I get so immersed in writing sometimes that I lose the balance between writing and living. One's a part of the other, but not the other way around!

I applaud you for having the good sense to step back from it all and return to the well. We need to engage with life before we can approach the page.

It is good to get out and about and let the world inspire us. I was in a real rut, cursing my muse. I started walking every day and it amazed me how much better that made me feel and how the motivation returned for me to write. Patience, perseverance and time out! It works you know, because I am happy to say that after some time between short story sales... I sold three today! :-)

You're just doing things differently - and that's fine. You don't have to decide today what you'll be doing next year - so go dig that garden, and let your mind go where it will.

Nurturing your inner nosiness is always helpful - mine has led to very similar theories about my own postman which I spend time musing on to a significant (possibly unhealthy) level ... he will definitely be in the book that's in my head! Enjoy your rhodies before the wind shakes them away and feel fabulous about your rest, standing back is sometimes the best way forwards :-)

I think you're doing just the right thing. Last year I realised that I had lost sight of why I write. I was so focused on 'success', on publication, that I forgot what writing was all about. Yes, it's a business - if you just want to make money out of it - but for me, writing should first and foremost be a joy. Because if it isn't, there are far easier ways out there to earn money!

My salvation came ultimately from flash fiction and short stories, which gave me the opportunity to write little and often, without the huge pressure of a 100,000 word mountain to climb. Over the last six months I've not only refound my joy of writing, but publication success has come naturally off the back of that.

Keep living life, and everything else will come in its own natural time and place...

This sounds so familiar! Taking a break can only refresh you - I hope it does.

I find having other creative outlets I don't take too seriously helps: which is kind of what you're doing by opening up your receptivity. But it's not easy, I know.

I can totally relate to all this, and hope you feel like writing again soon :o)

oh bless you Fi, I'm sniffing those rhododendrhons (sp?) right there with you, girl! :) x

I really relate to this and enjoyed reading your post. It also cheered me up this morning to read a Van Gogh letter in which he is bemoaning the state of the art world and his difficulty breaking into it: "The bulb trade may disappear - the flower-growing remains. And I for myself am contented, for better or worse, to be a small gardener, who loves his plants."

I read that as "when I woke with the postman this morning" seriously, I did.