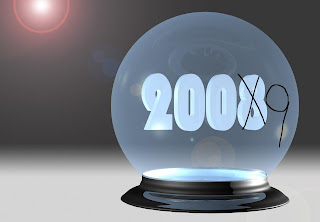 While newspaper columnists are busy trying to predict when the recession will end, and others pondering when Starbursts will turn back into Opal Fruits, I thought I would delve into the world of literature and make a few suggestions of my own for 2009.

I'm no Mystic Meg, so rather than make predictions, I've thrown up a few ideas as to what titles I feel will make waves this year. Of course, I could be totally wrong in my assumptions put forth, but here goes....I must also add that the following books are not necessarily ones I've read, but they are novels which I feel will have an impact upon the reading public.

My first choice is The Vagrants by Yiyun Li.
I first heard this author being interviewed on a New York Times book podcast. She picked up the Guardian First Book award with her exquisitely crafted short story collection, set in and around China, A Thousand Years of Good Prayers. This debut novel from Fourth Estate, is based on an incident in 1979, and looks at the ripple effect on individual lives in a provincial village when a young woman is sentenced to death for speaking out against the cultural revolution. The author grew up in Beijing and now lives in Oakland, California.

The second book I'm flagging up is Brooklyn by Colm Tóibín which follows the life of Eilis Lacey, an Irish woman who cannot find work at home. When a job comes up in America, she leaves her family and her home, and sets out for a new life in Brooklyn. With a strong female character, this is one which is being promoted heavily in bookshops, and one which I feel will continue to dominate the book charts this year.

My third choice is The Prayer Room by Shanthi Sekaran. Again, I was introduced to this book and the author via a literature podcast. The story begins in 1974, when young Englishman George Armitage goes to Madras, but instead of starting his Ph.D dissertation, he returns home with a bride named Viji. In her new American world, Viji seeks consolation in her prayer room at their new home in Sacramento. I'm eagerly awaiting the release of this book.

My fourth is Burnt Shadows by Kamila Shamsie (Bloomsbury), a book which features central character Hiroko who is due to marry a man by the name of Konrad Weiss. As she steps onto her veranda, wrapped in a kimono, her world suddenly changes as a bomb is dropped on Nagasaki. The blast sears the birds from Hiroko’s kimono onto her back, a fusion of 'charred silk, seared flesh'. The story moves forward and two years after the bombing, Hiroko travels to Delhi where her life will becomes intertwined with that of Konrad's half sister, Elizabeth, her husband, James, and their employee Sajjad Ashraf.

All these books are strong contenders, I feel, for prizes. If you want to have a flutter on who you think will win the Man Booker International Prize 2009, visit the fun prediction website www.hubdub.com where you can stake virtual dollars on who you think will take the trophy. There are many other predictions which would be fun to make - perhaps Dan Brown will churn out another book in his series, or a Conservative MP will make it onto the X-Factor judging panel? And now the lottery numbers...well, we've run out of time, so I'll keep those to myself.
Posted by Gillian McDade at 06:05

Interesting, Gillian. I really must read more out of my genre!

Yes, do Sam! I have read (and enjoyed) women's fiction in the past, so you can do it :)

Ooh Gillian, thank you for those fabulous suggestions, which all sound very much my cup of cocoa. I think we should have regular posts of book recommendations in fact..

And when WILL they call Starburst by their proper name again?

Gillian, these all sound like corkers! I've been listening to the Toibin on "Book at bedtime" - just snippets - and from what I've heard I very much get a feeling of William Trevor, one of my very favourite (and Irish!) authors.

Thanks for flagging this up!

Some interesting predictions there, but I've a feeling Dan Brown's new novel, The Lost Symbol, will eclipse the lot of 'em sadly!

Sorry for coming to this so late Gillian. What an interesting post - off to Amazon now!

Thanks for the comments Geraldine, Sarah, Karen and Fionnuala - Geraldine - I meant to listen to that and I forgot :( Sarah - I've been meaning to check out Sarah Waters - Fingersmith (?)

Fingersmith is a great one to start with! Hope you enjoy. It's clever, engaging, a great twist...love it!