Guest Blog by Roger Morris - The Surrealism of Detective Fiction 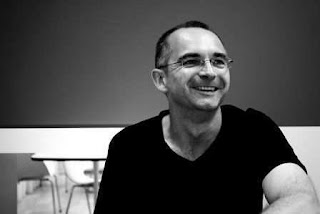 I'm reading, on and off, an anthology of American Detective Stories. It has some authors I've heard of, including Raymond Chandler, Ed McBain, Sue Grafton and William Faulkner (yes, that William Faulkner!) and many I hadn't. Clinton H. Stagg is of the latter group. His story, The Keyboard of Silence (1923), features - wait for it - a blind detective.
Reading the story has convinced me of a long-standing thesis of mine: detective fiction is actually a branch of surrealism.
To quote one joyously surreal passage: ‘“One often wonders,” continued Colton [the blind detective] ... “why a stout woman, like that one two tables to our left, for instance, will suffer the tortures of her hereafter for the sake of drinking high balls in a tight, purple gown.”’
His assistant is understandably amazed. But as the blind detective explains, ‘”All stout women who breathe asthmatically wear purple. It is the only unfailing rule of femininity. And to one who has practised the art of locating sounds that come to doubly sharp ears the breathing part was easy.”’ And so on.
Stagg (who sadly died at the age of 26) was parodied by no less than Agatha Christie for his lack of realism. But I can’t help feeling Agatha is missing the point. The point is not that it’s unrealistic. The point is it’s fun.
Another surrealist masquerading as a detective writer is G.K. Chesterton, whose Father Brown stories I am also dipping in and out of at the moment. Chesterton was a master of the ‘impossible crime’, and an unashamed exponent of the puzzle story. In fact, back then, in the Golden Age of detective fiction, there was no shame in writing stories that were primarily literary puzzles.
Much of the surrealism of the Chesterton stories is tied up in the solution of the crime, which often pushes plausibility to the limit. Well, beyond it, if we’re honest. I can’t give you any specifics, because I would be giving away the endings, but it’s hard to beat ‘The Secret Garden’ for the sheer audacity and outrageousness of its denouement.
The surrealists themselves were fans of pulp crime fiction, most notably the Fantômas series of novels by Souvestre and Allain. The fascination shows in Magritte’s 1926 painting The Menaced Assassin. A woman lies naked on a chaise longue, blood streaming from her mouth. A man, presumably her murderer, listens to a gramophone. His overcoat and hat are on a chair, with a suitcase on the floor. Two men in lie in wait for him on either side of the doorway, one holding a net, the other a club. At the window behind him, three heads are shown peering into the room. It was that painting, and the desire to write the story it suggests, that inspired me to take up crime writing in the first place.
How will Fantômas escape? Answers on a postcard – or in a blog comment.

Roger Morris lives in North London and is the author of a series of historical crime novels featuring Porfiry Petrovich, the detective from Dostoevsky's novel Crime and Punishment. In fact today sees the publication of the US Penguin paperback of the second book in this series, A Vengeful Longing. To find out more about his successful writing career visit his website or blog.

Posted by Administrator at 09:05

Loved it, Roger. I want to read the blind detective stories. I think a lot of modern crime fiction lacks humour in its pursuit of formulas such as Brutalise the Girl (will writers NEVER tire of this formula, which is surely past its sell--by-date not to mention morally bankrupt). It's a breath of fresh air to be reminded that some books in this genre are to be simply enjoyed. Thank you for an ingenious and engaging post.

Detective fiction is something I haven't read enough of. Next on my list is Gorky Park, which I believe is something of a classic.

Great post, Roger. I love detective fiction but I have to confess that I love Patricia Cornwell Scarpetta series, so I guess I'm more into the forensics side of the genre. I haven't read a good detective series for ages, though, must get back into them.

I like trying to figure out who did it and why, and how they get found out - intriguing.

Confession for Gillian McDade - I have only heard of Gorky Park because it was one of the members of a 1980's pop group (A-ha) favourite book!! Tee hee! I was heavily into them at the time, you see.)

I'm a lover of crime fiction too, so thank you for giving me some great suggestions to expand my reading list! Love the sound of the blind detective. :-)

Thanks Roger! I'm intrigued by the blind detective too - looks like he'll be getting a few more sales. I was a firm Christie devotee as a child - her autobiography is worth a read too.

I love that line. This definitely makes me want to read that Secret Garden story too, Roger. Thanks for a great post.

Ooh, how will he escape - that's what's exercising me...
Maybe he's got a doctor's white coat and stethoscope in his suitcase - and a razor - and he's going to dash to the loo, shave off his beard and hair, put on the white coat and steth. and walk out, pretending he's the pathologist.
OK, back to the drawing board.
Thanks, Roger!

Wow you learn something new every day, Julie! :) I remember Aha well, although I was only about nine!! Gorky Park (the park that is, not the book) is mentioned in a Scorpions' song - another 80s band!

Thanks for all the great comments, everyone! Nice to get some feedback!

I love a great detective story, though like Julie prefer the forensic end of the genre but your post really makes me think I'd love to read some of the earlier Pilgrims of the genre.

The blind detective concept, there's a current gap in the market there??!