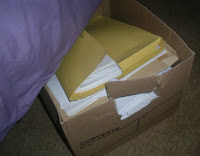 I'm going to annoy myself now, because I hate it when people oh-so-wittily start an article with the phrase “It is a truth universally acknowledged...”

But it is a truth universally acknowledged that debut novelists have so many unpublished manuscripts under the bed that there isn't even any room left for monsters.

Without those character-building decades of agony and rejection, the writer whose first-written novel gets published is seen by the more experienced as a bit of noob who just happened to get lucky and isn't really ready for the cut-throat world of publishing or the terrifying prospect of writing a second book.

My book genuinely is the first one I've ever finished, and the first one I ever submitted anywhere. Sometimes that makes me feel a bit awkward and inferior. What if I can never write another one? What if it really was just luck and I've somehow elbowed my way to the front of the queue ahead of people who are more talented and have worked harder for many more years?

So, in attempt to convince myself that I have served my apprenticeship, I made a list of all the books I've worked on since I decided I wanted to be a writer, and I'm reassured to discover that, although unfinished, they amount to a reasonable body of words.

I'd love to know more about the stories languishing under other writers' beds, but it's understandably difficult to get people to talk about these early attempts. Partly that's because all that stuff is in the past now and a lot of it is embarrassing. Partly it's because we aren't supposed to hint at former failure while submitting or promoting our latest work, and partly it's because we were so absorbed by these ideas that it's discomfiting to think of anyone else knowing about them when they aren't ready to be seen.

But although these books fell by the wayside, I think they are important and worth acknowledging. We should celebrate every attempt – whether it was finished or unfinished, whether it was utter rubbish or just infuriatingly “not right for the market.” They are not simply stepping stones on the way to our individual goals, but valuable in themselves for what they've taught us, and for the excitement and inspiration we felt while writing them. And for the fact that – unlike most people - we had the courage to try to write a book at all.

Photo: Some of the unfinished books under my bed.

Yes, some very good points, Caroline - although i do think one reaches a point where the amount under the bed is enough to make you ask if you are doing the right thing, continuing with your writing.

I have 3 under the bed - i doubt i would admit it if i had 8. In fact i know for a fact i'll never reach that point - sometimes you just have to face and acknowledge the obvious!!

But yes, i have lots of purple prose hidden way, plus the autobiographical stuff, the plain ludicrous, the roaming POV and the buckets of 'tell'.

A lot of happy memories too, though and i still love some of those characters.

I think I would have been in the same situation except I took a lot of time out writing non-fiction and I keep on tinkering with the same twenty-years-in-the-writing novel.

Caroline, 'Kill-Grief' was under my pile of reading group books and my husband has got hold of it. He likes it very much and says it's 'gripping'.Maybe I'll get it back in the hols.

I have one hiding under my bed, well in my computer - password protected in case anyone should break in, read it, and laugh! All print outs were shredded.
I'd love to read your excerpt from the novel about the beleaguered youth group leader, Caroline!
Well, I've just finished Kill-Grief and it gets 10/10 from me! Excellent book, well-written and a gripping story. So glad you didn't leave it in that box!!

Oh look - Sheila and I posted simultaneously - and we used the same word - 'gripping'!! :)
LOL

I particularly like the torn handle on the box from moving it about. A sure sign of long-term commitment if ever there was one!

Just remember that when your papers are donated to the British Library it's going to keep some archivist happy for ages!

Great post Caroline and pretty well timed for me as I woke up havinf a huge crisis of faith this morning thinking that the current WIP (second novel) is just going to join the first one under the bed. But you know what you're right, we put a lot of ourselves into everything we write and at least we try. Its an indredibly personal journey we are all taking and at times hard to keep going. But keep going we will - saves dusting under the bed if there's loads of 'stuff' in there!

That is so true. Thinking back, my list of past ideas (a lot of which I'm still hopeful of finishing... okay, starting) is immense, well into double figures.

Thankfully several of those have merged into a series of novels that I'm working on now. I will finish them. I will, I will, I will!

Great article. Glad to know I'm not alone in this.

I wrote a fictionalized autobiog too! At about age 12. Made up snarky names for all the class b****ettes, and it ended with me and the school hunk skating the last song at the year-end roller skating party.

As you say, 'We should celebrate every attempt'!

I have two under the bed, although one of them I still hope to resurrect one day. But, oh yes, I wrote some purple prose in my youth! I think I would scream with laughter and horror if I could read some of it now..

Intriguing post and you should by no means feel guilty for getting the first novel you completed out there and published. It's inspiring to know that it can be done. Well done.

I am in awe of those of you who have seen a novel through to the end let alone got them published! The fact that you've written a novel or two, or six is an utterly anazing achievement. Something to be very proud of.

I have no novels lurking under my bed, just a load of dust and the odd twenty pence or pen! I do have 14 A5 sized thick notebooks crammed with snippets and notes, ideas, etc in my cupboard though!

My 2 completed works (as Shakespeare may have said) are in Sainsbury's bags (which he might not have).I also have a full-length screenplay stuffed in a plastic box which I still have a peek at now and again and still love and may turn into book #4 The angsty poems and dirges to lost love and empty souls are insulating the loft!

I came across a pile of spiral-bound notebooks the other day full of half-started / not finished stuff dating back about 10 years. I'm pretty sure there's some even older stuff on a (luckily now inaccessible) floppy disk too.

Thanks everyone. I wonder how much stuff will build up under future writers' beds, or whether more of it will be lost forever as it gets stored in electronic forms that become obsolete? I must have loads of stuff on floppy disks and old, broken computers.

I have two and a half stashed in notebooks in the bottom of the wardrobe. Despite loads of rejections, I dust them down now and again and when I read them I still don't think they're rubbish. (O.K. they're not Joanna Trollope either!)It's hard to feel validated when work isn't published, but finishing something is an achievement in itself and it's all a learning process. Keep on keeping on everyone!

Great post, it's sad to think in these days of computers and netbooks that can be taken from cafe to cafe, there will be no more battered old notepads and spiralbounds but just files on an ancient hard disk somewhere - doesn't seem quite as romantic!