Titanic - when tragedy is brought to book 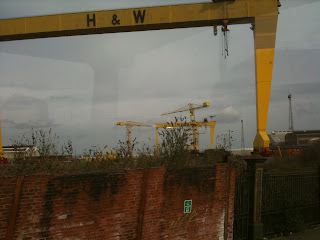 Yesterday (April 15) was the one hundredth anniversary of the sinking of the Titanic, and there have been many commemorative events held at home and abroad in memory of those who lost their lives. I was born in Belfast and my grandfather, great uncle and father all worked in Harland and Wolff, proud builder of the White Star trio. There has been a buzz in the air, thanks to the opening of the new Titanic Visitor Centre in the regenerated docks area which I'm visiting today, not to mention the many television documentaries and dramas which have been aired in honour of the majestic ship. An ambtious docu-drama even tried to recreate the sinking, step by step. It's hard not to get emotionally attached to the event, as I have, and I wonder how the passengers would have felt knowing they were nearing death. Why did the band play on, continuing their rendition of 'Nearer My God To Thee?

This prompted me to think about whether or not a book can truly capture the enormity of such a tragedy. Many tragedies have been written about in both fact and fiction, from Columbine to September 11 to conflicts. In my soon-to-be-published book I deal with a tragedy, very loosely based on an actual event, but I often wonder whether rows of words on white pages can really show how horrific the incident was to witness first-hand. I try to re-create eye-witness accounts and wonder if my work really does it justice.

En route to New York on her maiden voyage in 1912, the Titanic hit an iceberg which began the sinking process, leading to the loss of over 1,500 lives. What was the immediate reaction upon learning this? I imagine utter panic would have swept through the ship, each person reacting in a different way. I imagine some would have screamed, some would have remained silent, others would have prayed and told their loved ones they will meet again. How terrifying must it have been, sinking into waters so cold in the middle of a vast ocean?

A book by Morgan Robertson dubbed a ‘prophecy’ was published in 1898. The novel, Futility or The Wreck Of The Titan, about the sinking of a supposedly unsinkable ship, contains many similarities to the sinking of the Titanic. The first half of Futility introduces the protagonist, John Rowland, a disgraced former Royal Navy lieutenant, who becomes an alcoholic. Dismissed from the Navy, he works as a deckhand on the Titan which hits an iceberg on its travels. The ship starts to sink but he manages to saves the young daughter of a former lover by jumping onto the iceberg with her.

Furthermore as a journalist and one who has witnessed many tragic events over the years, I wonder if even newspaper reports can convey the enormity of tragedy and help readers understand the event. Is the newspaper article simple a summing up account of the event, or do readers feel empathy with the victims when they read the reports? Can words really do tragedy justice?

I think, when it's well-written, a factual or even a fictional account can connect us emotionally to what we're reading. However, the authenticity of the feelings is largely subjective.

Thanks for posting a beautiful piece of music.

You're welcome, Wayne! I was going to post the Celine Dion song instead......just kidding! :)