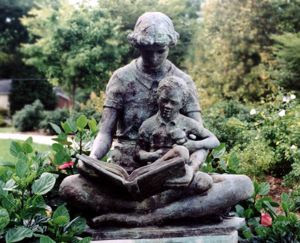 “Once you learn to read, you will be forever free.”
Frederick Douglass

Ten or more years ago, and in a former life, I made educational programmes – many of them focussing on literacy – for young children. I loved writing scripts and songs and stories, and working with marvellous animators to bring picture books to life. Whilst making ‘Rat-a-tat-tat’, I immersed myself in everything from Julia Donaldson’s The Gruffalo to Jill Murphy’s books and to Quentin Blake’s illustrations. We took the books out into the real world and picked up the themes of the stories. They say, never work with children or animals – but we worked with them all: we visited zoos (filming with meerkats, lemurs and a large snake), otter sanctuaries, cat rescue homes; we filmed dog clubs (don’t! – it’s utter chaos, especially when attempting to get them to bark on cue) and on one memorable and very stressful day we filmed Aiden, our daredevil presenter, attempting to ride a surfboard and sing amongst the waves at Newquay for the story of Mrs. Armitage and the Big Wave, whilst a crew member swam underwater holding a large shark’s fin. Aiden, the best kind of presenter – funny, amenable and up for everything - climbed trees, went up in hot air balloons, shovelled coal in steam trains and dressed as a pantomime dame. And we worked with lots of wonderful teachers and enthusiastic children. It all seems very long ago and far away now. And Groucho Marx would probably disagree that television is any kind of substitute for the act of reading itself:

“I find television very educating. Every time somebody turns on the set, I go into the other room and read a book.”

I know a primary school teacher – an excellent teacher – who does her very best to bring the children wonderful and positive experiences through their lessons. But I also hear how she struggles to find the time, amidst the statistics and the SATS tests, to do so. And I wonder (not having any children of my own) whether that joy in reading which I was lucky enough to have as a child is still as prevalent amongst children today? Or is reading another chore, another task to master, another tick or cross against their name?

For most of us who have ended up as writers, reading was a magical experience, a portal which took us into exciting worlds where anything was possible. As a child, my tastes were eclectic: I read my way voraciously through The Brothers Grimm, Aesop’s Fables, Enid Blyton (from The Faraway Tree and The Famous Five to Mallory Towers), the Susan books by Jane Shaw (because the heroine had my name, and because they were very funny – I still have them and re-read them). I read Robinson Crusoe and The Swiss Family Robinson and Heidi, the Swallows and Amazons books and, best of all, the Narnia series. And many more in between. Books were my friends and my secret world. Indeed, I’ve even called one of my main characters – who writes fairy tales - Jo (after Jo in Little Women.)

Do children today have time to dream? Because that’s what books offered me. Time to roll around, metaphorically, in different worlds: to pause and meander and wander amongst new ideas and to meet people who were like no-one I knew. Time to wonder ‘what if?’ Time to try out other lives. Children today seem to have their time parcelled tightly into neat packages, each with attainment targets and checklists. And their ‘fun’ seems to consist of fast-paced TV programmes and video games. I probably sound like an old wotsit, but I think kids are the losers now. They are losing the joy of slowing down to the pace of words. Losing the ability to dream. Perhaps we all are. Which is very sad.

So let’s take a moment today to go back: back to the days when we were young and books were magical. Which were your favourites, then? And what do you read with your children now? What would be your ‘Inheritance’ books? Which would you take on your Desert Island?

“When we read a story, we inhabit it. The covers of the book are like a roof and four walls. What is to happen next will take place within the four walls of the story. And this is possible because the story's voice makes everything its own.”
John Berger
Posted by Susie Nott-Bower at 06:00

Lovely post, and one I wholeheartedly agree with. Those books you mentioned were all among my childhood favourites too. Thank you.

I have children and despair at how little they want to read. When we were all young, we had no computers and little in the way of television to distract us. Lke you, my escape was into the other worlds that books painted for me. A lot of children now don't seem prepared to make the effort of reading, when pictures are more instantly rewarding. I do wonder how a generation of imaginations will have been affected by this constant stream of content. What kind of writers will they make, in their turn? Perhaps we're a dying breed?

Thanks, Lindsay and Geves.
I guess the 'classic' children's books today would be the Harry Potter series. Any others?
And Geves, that's an interesting question about what kind of writers will today's children become? I hope neither writers nor readers will become extinct!
Susiex

Some of my earliest memories are of my brother reading Bible stories and Aesop's fables to me on a Sunday morning. I loved Thomas the Tank Engine (mainly for the pictures!), as well as Dr Seuss and Enid Blyton. I think reading in groups might be good for children as it would stimulate discussion afterwards. Sad to say, as others have stated, the payoff from reading doesn't seem enough on its own for today's kids. (Adopts curmudgeonly face, folds arms and wonders when Spangles will make another comeback...)

I'm probably even more excited today about reading than I ever was as a child. My parents used to chide me for 'wasting time with your nose in a book' and I'd go away and do it in secret but always with the worry I'd be found out and jeered at. I couldn't understand how teachers wanted me to but at home it was seen as idle nonsense.
I brought my daughter up to love books as much as I always have and continue to do so. She still has all her baby books (in the loft now, but they're there for her when she's ready to get all nostalic one day) and we still recite some passages we remember reading between us when she was growing up (Dr Seuss a favourite of course). We've always swapped books and stood over each other waiting for a reaction to a certain part and we still spend hours talking about books we've loved and bookes we're loving. So I guess my response to this (long-winded as usual) is that I Blame The Parents - because my teen is the biggest booklover since booklovers began - and amen to that!

Ah, Derek and Debs - that's lovely.
When parents (or brothers) spend time reading books and telling stories with us, it's magical and never-forgotten.
Thanks, all, for your comments.
Susiex