Lick it and stick it

I hadn’t a clue what to write about when I switched on the laptop to compose my post, so I gazed toward the calendar for inspiration. None was forthcoming. However, it did occur to me that we're almost half way through the year and so far I haven’t revised my New Year resolutions to see if I have fulfilled them. To be honest, I can’t even remember what I’d pledged in the first place, but I think it had something to do with finishing the current novel, which I’ve done, and to write more short stories which I’ve not done. The fact that it’s April 30th is also a timely reminder to buy stamps before the post office closes today. The stamps I buy today will be licked and affixed to the rejection envelopes which will accompany the recently completed ms.

It saddens me that most agents still ask for postal submissions. And quite a few still demand the little brown envelope in which they will place their rejection. In the age of new technology, I often wonder why agents still insist on having the mss posted. ‘Save the trees,’ I hear you shout. I must admit that I prefer to read from paper than I do a computer screen. And that is my one reason for the strong dislike of the e-reader. But I imagine that it’s easier to store fifteen manuscripts in a device than it is to stuff paper into a briefcase, the latter conjuring up images of a post-holiday suitcase crammed full of bargain buys. On the other hand, it’s probably easier to make notes on paper. So I see the argument both ways.

Many writers are put off by the inconvenience that postal submissions often entail. I can say assuredly that I’m certainly not. If that’s the way my preferred agent wants to receive them, then that’s the rules I will follow.

I will bid my manuscripts farewell this afternoon as they are shepherded off in the Royal Mail van. I hope the stamps on the enclosed brown envelopes are steamed off by the agents’ assistants as soon as they arrive, and that they put them to good use on this year’s Christmas cards. I don’t want any rejections, thanks.

It’s April 30 – remind me of your 2012 writing resolutions. Have you followed them through? Are you even half way there? Or what do you think of postal submissions? But be quick because I have to get to the post office before the end of today because stamps are going up as I mentioned…quite a lot! 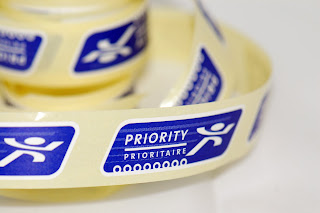 I must admit that I set myself with far too many writing resolutions this year, and so am struggling to meet them.

I think it may be time to prune, as their disappointed faces do my head in every morning!
HB x

I wanted to complete an edit of a WiP, and I've done that. But I also think it would have served me well to have a set of resolutions / goals and to have spread them over the year. I'm staring at two prologues, each for different books, and mentally flipping a coin!

1 - get two new magazine commmissions.
2 - write one new chapter on the sequel novel.
3 - read one book in a genre I don't usually read.
4 - buy a tumble dryer.

Much easier for me to achieve than a whole 12 months worth of resolutions.

Love your list, Deb! I think it's good to keep a 'rolling' set of resolutions going, maybe with an overarching theme set at the beginning of the year. Not that I have.
Susiex

Oops Deb, I thought for a minute you were going to take delivery of 12 tumble dryers by the years' end (as usual I didn't read the previous properly!) And I'm right with you on the Don't make it/can't break it type of resolutions. In fact some writerly stuff's happened this year I'd never even THOUGHT of!

Ah, there you are Debs R! I've been wondering where you've been hiding. One tumble dryer is more than enough, thank you. It's only taken me 15 years to decide to buy one!

Never missed my tumbler - it's been stuck in the shed since we moved 7 years ago and I've become quite used to drying on the radiators over the winter months - ooops this isn't Strictly Laundry? *gets coat*

Great post! And congratulations, meeting your novel deadline is the most important, much better to leave the short story writing for while you're waiting, and waiting and trying not to check your emails and waiting, and falling down stairs in the rush to greet the post and waiting and ... best of luck with those submissions and keep us posted. Hope you got there in time for what can only now be known as 'bargain stamps'.