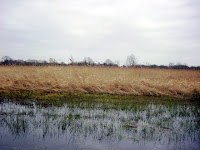 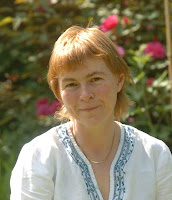 I suppose it came to me while I was walking the dogs. We have two of them, both lively and requiring a lot of exercise, so I spend a good deal of time out in the countryside around my home, in all weathers, alone with my spaniels and my thoughts. It’s actually when I’ve done a lot of my best ‘writing’ over the years, for all that I carry no notebook or pen: I’ve constructed dialogue, solved log jams in plots, and reached understandings of my characters’ motivation.

Home for me is the flatlands of the Cambridgeshire fens, a landscape which is far from commanding immediate attention. Wide, wet and as lacking in features as it is in contours, it provides in many ways the ultimate blank canvas against which to project the constructs of one’s own imagination. Much of the time, I never saw my surroundings at all.

Setting, however, has always held a particular fascination for me. I’d just finished writing a novel (The Tapestry of Love, 2010) in which landscape played a major role: in that case, the dramatic mountain beauty of the French Cevennes. This set me to thinking about why I had chosen to locate the book in a place so spectacularly different from my own. It set me to thinking, but also to looking: really looking at the fens in a way I had hitherto been too preoccupied to do. Because once you open your eyes to it, the fens have a drama all of their own.

First there is the water. Once, not many centuries ago, this land was rescued from it by a process of damming and pumping and draining, and every year – with or without human connivance in the shape of global warming – the water threatens to reclaim its own. It clogs the fat, black, peaty soil; it runs and trickles in ditches and culverts; it lies never far beneath the surface of the fields so that a mere half-day’s rain can swell it into flood.

Then there is the wind: this is a landscape windswept like no other I have known. To the east and north, nothing rises by more than a few dozen feet above sea level between here and the steppes of Siberia, and you can tell. Walking in one direction the going may be easy, the sun warm on your face, but turn back and the breath is knocked out of you in an instant; blinded by tears, you’re forced to lean into the blast like Amundsen nearing the Pole.

So, when I realised that I had to write a novel with the fens as a backdrop, it was neither character nor plot which came to me first but theme. This had to be a book about the elements, so constant a presence in the fen landscape – a book about fire and water, earth and air. Ninepins is, on its surface, a standard work of women’s fiction, a book about families and relationships, about mothers and daughters. But percolating through it, like water beneath the reclaimed soil of the fens, lurks the thematic pull exerted by its setting. As I told my story, I found the same ideas kept intruding: of breath and breathing, fire and flood, choking and drowning.

Walking the dogs has never been quite the same since.

Rosy Thornton writes commercial women’s fiction as well as lecturing in Law at the University of Cambridge, where she is a Fellow of Emmanuel College. Her previous novels include Hearts and Minds (2008) and The Tapestry of Love (2010). Her fifth novel, Ninepins, will be published by Sandstone Press on 19th April 2012.
Posted by Susie Nott-Bower at 06:00

Being a flat-landscape, east coast, horizon-necessary sort of person I await Ninepins with anticipation.

Thanks, Sandra! Though you make us East Anglians sound like pre-Pythagorean flat-earthers!

(And thank you very much, Susie and the other Strictlies, for giving me this space to blog about my book. It is much appreciated!)

What a lovely and evocative piece of writing. Even though I've never been there, I had a sense of the land and its history; how, perhaps, it harbours a grudge, like some forgotten Old God who casts a jealous eye at the populace. Interesting too that you do your conjuring in your head. Thanks for sharing your thoughts.

What a lovely post, Rosy! Best wishes with Ninepins and I look forward to reading it.

I loved this post, perhaps because I love novels where the landscape is almost a character in its own right - I devoured Thomas Hardy novels when I was a teenager.
The Tapestry of Love was one of my favourites out of all the books I read last year, so I'm looking forward to Ninepens. Good luck with it - I'm sure it'll do brilliantly.

Thanks very much, Derek and Gillian. And whoever-you-are! So nice of you to say that about 'Tapestry'.

It's a lovely piece, Rosy. Congratulations on Ninepins!
Susiex

What a lovely descriptive blog post. It's wonderful to find another author who is inspired by settings to the point that the landscape becomes a 'character'. Do you find that quite rare?

I also loved your evocative descriptions and can't wait to read the book. I wish I could 'write' as I walk my dog though! I am incapable of writerly thought without either a pen in my hand or a keyboard in front of me!

Tee hee, Caroline - sometimes with me it's the other way round - the pen in the hand or the keyboard in front of me which renders me incapable of writing!

And thanks, Fiona and Susie.

I know that landscape well from the time I lived in Peterborough and used to drive along those straight but bumpy roads - so much subsidence - to March, Ramsey and Kings Lynn. It can be quite eerie depending on the weather and time of day. Full of atmosphere.

Lovely post, Rosy which makes me feel like taking a hike in the peaks right this instant (my local landscape).

Best of luck with the book.