Whatever Next? - by journalist and novelist Sophie Radice 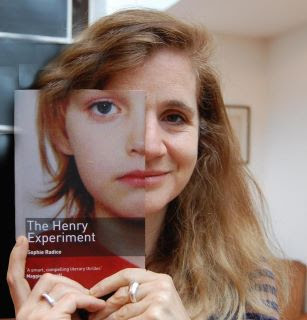 So the first novel has come out - and another must be written while the momentum is there. Or that’s what I’ve been told.

People are full of ideas for me. They say they miss Anna, the main character in my novel, when they finish reading and so they want to read about her in other situations. Someone has suggested I work on the thrillerish element in the first book and that I should read Sara Paretsky, to learn how to write really good character driven thrillers with a female heroine and with an interesting political perspective. While I was talking to this person I was quite inspired. Wouldn’t it be good to put Anna, the heroine of The Henry Experiment, in some really difficult situations, possibly to do with the Congolese community she had started to become involved with in my first novel? I could see her stumbling into some really complex stuff, which would take place in London and Manchester. The situation would again have something to do with a missing child but this time a much older one.

The trouble is that I didn’t really know there was a thrillerish element when I was writing it, although it was meant to be quite tense. Which is strange because I hate tension. I tend to make gasping sounds and grab people's arms in the cinema when someone is in danger and just avoid books that make me feel stressed or uncomfortable. I think someone must have told me to try and get some tension in a book if you want people to carry on reading it.

There is also the problem that I was imagining my next book would be a book that wrestled with really big themes – themes such as God and Darwinism all packaged up in a really good family story.

So what to do? Write two books at the same time (in between trying to earn a living, look after children blah blah) – switching from one to the other? No. That is impossible. Write both of them, back to back (and try not to think of the years ahead and the huge effort it takes to get published and then to get people to actually read your book)?

Which is another thing. I am so preoccupied with trying to sell The Henry Experiment and get publicity that I am not sitting and thinking about what my next one is going to be at all. No, I’m far more concerned with trying to get bookshops to take my book, get people to write about me and get reviews. I must try and sit down and think at some point.

The trouble is that I have really forgotten how it is done. When people ask how long it took me to write The Henry Experiment, I have no idea. I can’t seem to remember how I wrote it or in what circumstances. Did I have a routine? I can’t have done. I was working full time, with kids and a difficult husband. I think I must have written it in the evenings. Or was it such agony that I have put it out of my head? Perhaps I used to force myself to get up at five in the morning before I went to work? - but somehow knowing myself I very much doubt it.

Perhaps it wrote itself.

Sophie's novel, The Henry Experiment, can be bought at: http://www.linenpressbooks.com/shop/the-henry-experiment-2/
Posted by Susie Nott-Bower at 06:00

Thought-provoking piece this, Sophie, but I should imagine it'll be near-impossible to write a book that isn't, to some extent, dictating itself in your head. That dilemma between earning by doing what is deemed commercial and doing what you need to do is an ever-present one and I wish you luck with solving it.

Sophie, it is really odd to be pronoting one book while writing another.
The two skill sets are very different.

But you do get used to it! Indeed, I now enjoy changing gears so that my whole life isn't subsumed with one or the other.

There are weird moments though to be sure. I recall writing a book, while promoting another here, and the previous one in a different country. I was also involved in haggling over the film rights of all three.

People would ask me about somehting very specific and I couldn't remember which book we were talking about, let alone what happened in them.
HB x

Congratulations on the launch of your novel, Sophie. To paraphrase St Paul or Isis, we writers are all things to all people!

Sophie, thanks for dropping by - I soooo empathise with the whole do-I-get-on-with-writing-another-book or do-I-focus-on-marketing dilemma. But I have found - so far - that the process is certainly a learning one and I'm developing skills I never knew existed!
All the very best with The Henry Experiment.
Susiex

I'm in that place too, with one just out and another that is in first draft stage. Best of luck with THE...off to have a look at it!

Here is the link