We are the past 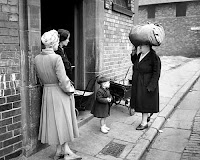 I click a lot of links on Twitter. Often I cast an idle glance at what's there (picture of a cute cat doing something cute; the Daily Mail's latest calculated attempt to stir up outrage) and then click away again. A few weeks ago, however, I followed a link to the documentary Morning in the Streets, made in Liverpool and other parts of the North West in the 1950s. Although it's 35 minutes long, and therefore way beyond the attention span of the 'younger generation' to which I tragically still pretend to belong, I watched it from beginning to end. As well as a joke about a budgie, it contains footage of some schoolkids, about the age my parents were at the time, singing a playground song:

'Write me a letter, and tell me when you're better, and don't forget your good friend Pat.'

The song has stuck in my head ever since, as if it were there already, and watching the video made me think about people's approach to the past and how I want to approach historical fiction.
I was surprised to feel a sense of nostalgia while watching – after all, I wasn't around in the 1950s so any memories I have of that time are second-hand, passed down from family members and absorbed through literature, photography and film. I did feel nostalgia, however – for the sunshine and the hand-knitted cardis and the traffic-free streets – even though the sensible part of my brain was well aware that there has never been a golden age. Will the early years of the 21st century ever be viewed in the same way?
It's hard to imagine people in 2111 looking back and thinking how lovely and simple life must have been before the advent of flying cars and implants that allow messages to be sent direct from one brain to another. But surely they will. With medical advances, some of us might even be alive, complaining about young people and remembering how much better things were in our day. Others will laugh affectionately at pictures of unwieldy iPhones that required you to spend many seconds typing out a whole text message.
We will be someone's concept of the past – we are continually creating the history of the future, living out the nostalgia of later generations. Yet it doesn't feel like that, does it? It just feels like life. While attempting to write historical fiction, I find it worth remembering that I'm an inhabitant of history too.

I don't think there is much room for nostalgia in histfic, because it seems to me that it's not really about the past. It's about the present - just a different present from the one in which we happen to live. Historical fiction is about the here and now that belongs to individuals - not 'Victorians' or 'Georgians' or 1950s Liverpudlians, but people with a story to be told.
Posted by Caroline Rance at 06:00

I completely agree that good histfic makes you feel in the present.
That humans are pretty similar whenever and where ever they exist.
HBx

That's a brilliant post Caroline. How true. And the best hist fic does just that. The histfic that doesn't work for me always has a flavour of ain't they quaint about it, and no they're not. They're living in the present.

I think we live in a golden age of instant information, free schools and medical care in the UK. In 2111, we will look back and sigh at how good we had it.

Lovely post. There was a feature in the London Big Issue today with some incredible photos of London streets over the years...they really got to me. I personally have no feeling of hankering for the past...I think that's quite unusual, actually!

I've been trying to find a way to verbalize what I've felt about this topic, and lo and behold, you've captured my thoughts perfectly--Bravo and Thanks!