Guest Spot: Novelist Christina Courtenay explains how it's not always as simple as we'd like it to be... 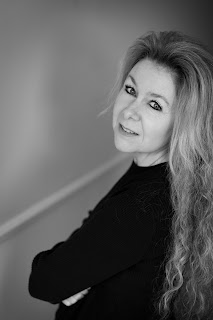 Hello and thank you for inviting me to be a guest on your lovely site!

I’ve been having a look at all the great posts here, but what really caught my eye was your statement in the ‘Welcome’ section that you are ‘a group of writers with an enduring love of the craft of writing – a love which requires great resilience in the face of recurrent self-doubt, writer’s block and rejection.’  I can really relate to that!
Like a lot of people, I thought it would be dead easy to write a novel and get it published.  I had the idea that I could just cobble together a Mills & Boon romance and that would be it – I’d be an author and earn lots of money (this was back in the 1980’s when there were stories in the press about rich M & B authors – I’ve no idea if they were true).  With enthusiasm, I started writing and as the words flowed so well, I actually wrote two Mills & Boon historicals in a row.  Since I liked them both, I thought I’d send them off at once and naively expected the editor in question to either choose one or perhaps offer to take on the two.  Yes, you’ve guessed it – they came back very quickly with a rejection letter.

That could have been the end of it, of course, but by then I’d been bitten by the writing bug and realised I enjoyed it so much I didn’t want to give up just yet.  I enrolled in a correspondence course, but eventually quit as it wasn’t aimed at romance (which was my chosen genre).  Then I discovered that there were writing magazines and in the back of one of them, I saw an advert for the Romantic Novelists’ Association and their New Writers’ Scheme.  I promptly enrolled and it was the best thing I’ve ever done!
I sent them one manuscript a year for critique and eventually learned where I’d been going wrong.  There are so many beginners’ mistakes, very easy to correct if only you know about them, and as I started to attend the RNA’s talks and conferences, my writing improved.  The other good thing about joining an organisation like that is that you get to meet people – especially other writers.  Networking is not something I’m good at, but it’s not as daunting to chat to agents and editors at a party for instance, rather than in a formal situation, and eventually you might strike lucky.
I did when I met my editor at one of these events and managed to get up the courage to ask if she’d be interested in a historical romance.  She was, and my first novel Trade Winds, was published last September.  My second one, The Scarlet Kimono, is coming out soon, which is very exciting.  So all I really wanted to say was that when people tell new writers to grow a thick skin and persevere and that it’s the only way, they’re right.  It took me twenty years to get to this point, but it was worth the effort and the best thing is the support from other writers because this is what we love to do!
Thanks again for having me!
The Scarlet Kimono is published by Choc Lit on 1st March, ISBN 978-1-906931-29-2   (For more details see www.choc-lit.co.uk )
Blurb:
Abducted by a Samurai warlord in 17th-century Japan – what happens when fear turns to love?

England, 1611, and young Hannah Marston envies her brother’s adventurous life. But when she stows away on his merchant ship, her powers of endurance are stretched to their limit. Then they reach Japan and all her suffering seems worthwhile – until she is abducted by Taro Kumashiro’s warriors.
In the far north of the country, warlord Kumashiro is waiting to see the girl who he has been warned about by a seer. When at last they meet, it’s a clash of cultures and wills, but they’re also fighting an instant attraction to each other.
With her brother desperate to find her and the jealous Lady Reiko equally desperate to kill her, Hannah faces the greatest adventure of her life. And Kumashiro has to choose between love and honour …
My website and blog are at www.christinacourtenay.com and I also regularly blog in the Choc Lit Authors’ Corner at www.blog.choc-lit.co.uk
(Trade Winds has just been shortlisted for the RNA’s Pure Passion Historical Novel Prize 2011)
Posted by Debs Riccio at 06:00

Thank you for your honesty.

I think it does us all good to hear how difficult the road to publiction can be.

And thick skin and a smile in the face of rejection are a necessary part of the writerly tool box.

Those without need not apply.
HBx

Ah yes, I remember trying to bash out a Mills & Boon back in the day and failing dismally! I also joined the RNA New Writer's Scheme a few years ago and received such positive and constructive feedback it really kept me going.

Perserverance is more than half the battle though, as you've proved! Good luck with the new novel, it sounds great :o)

Thanks for coming by Christina - twenty years! THAT is resilience...
Many congrats on having the strength to keep going and on your ultimate success. F

Great post - thank you. The RNA sounds brilliant - I wanted to join the New Writers Scheme but my novel didn't fit the criteria, unfortunately. :(
Very best of luck with the new book.
Susiex

Thanks for the post Christina and best of luck with the book!

I agree that persistence is the only way, however hellish it feels at the time.

Nice to meet you on Saturday, Christina! Agree RNA is fab for networking and moral support as well as the New Writers' sceme. Maybe I should go back to romance! Like the sound of the new novel. One of my all-time favourites is the Ginger Tree - also Far East setting although a different period.
Alib

Thank you all for your comments, I'm glad you agree with me! I did want to give up many times, but I have two 'writing buddies' (we critque each others' work) and we made a pact that we couldn't give up without the others' agreement. I can really recommend having a writing buddy, someone whose judgement you trust, because their support is invaluable when you're feeling down

Writing a Mills & Boon is hard work. I don't want to do it myself, but I wouldn't denigrate the writers who do (especially since I know one myself).

This book sounds great! I spent almost two decades in Japan and know a lot of people who like historical romance set there. I'll look out for it.

Thanks, Mary! I wasn't in any way denigrating Mills & Boon authors - they have my deepest respect! As I said, I tried to write one and failed dismally. It's very difficult and requires great skill! And I love reading them.

Excellent interview. I wish you the best of luck. I am now going to go search for Trade Winds. I notice your Red Kimono is not available in the States yet. Grrr.