Why do we write? - Guest post by Alice Turing 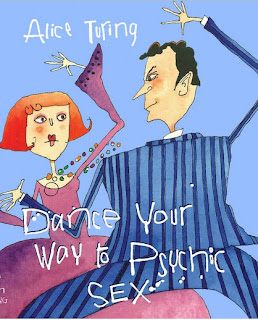 A year ago, I decided to jack it all in and turn my back on writing. It was ten years to the month since I’d started writing my first novel. I’d been through many writing stages, but they’d all had one common theme.
I was trying to get noticed.
I love the stage, have always been quick to say, “Look at ME,” but have always felt slightly ashamed. And then stubbornly proud, then self-consciously indifferent, then ashamed again - on a life-long cycle. And that’s what publication is: One long look-at-me treadmill.
I sent the first three chapters of my first novel to 30 publishers and 15 agents before I finished writing it.
“Look what I’ve done!”
and
“Look what I’m doing!”
At first the process of packaging myself and my work was exciting. Until the rejections started to appear, and with it the angst. Was I too forward? Not forward enough? Too informal? Too previous? Too unpolished? Too bad a writer?
Twenty-eight of those 30 publishers said no, as did all 15 agents. But then, ten months after I sent it out and (weirdly, and coincidentally) two days after I finished writing it I got the phone call from the 29th publisher, saying YES. And then there was a new kind of packaging. The publisher was only small: If I wanted to set the world on fire I had to hawk my own wares. I splatted myself across the internet, organised two multi-media-performance book launches, got interviewed on Woman’s Hour, tried to display myself in a way that would MAKE PEOPLE NOTICE ME.
Part of my schtick was that I was honest and open about myself and my work. Self-consciously self-aware. It was supposed to be charming, beguiling. And there’s the thing. It was still an act. It was still a Look At Me, and the Me I wanted people to look at was a very particular me. I wasn’t allowed to admit too much doubt, or be too boring, or too conventional. I had to be upbeat. I was Selling, and salesmen never cry.
The book didn’t do too badly, given the size of the publisher. But the Woman’s Hour appearance had no effect. There were no broadsheet reviews. A few people Looked At Me, but not as many as I’d hoped, and not as enthusiastically or for as long as I wanted.
The next book was hawked - by a shiny new agent - to a great deal of publishers, large and small, around the world. The Germans published it. Nobody reviewed it there apart from a couple of disgruntled Amazon users who seemed to think they’d been promised the opposite of what they got. I said “Me, look at me” in as many ways I could think of, until finally I snapped. Nobody was looking at me. Nobody was talking about me. No-one was interested, and the fact that I wished they were only made me hate myself even more.
When I’d fielded enough rejections, when I’d swallowed a bucket-load of jealous lumps toward those who succeeded where I had failed, I gave up.
My kernel of self loathing (“Look at me, I hate myself, aren’t I interesting?”) said that I only ever wrote to get noticed. To say to the world, look at how clever I am. Love me, praise me, idolise me. But there were other reasons. I wrote because I love words. Because I like to play with them, toy with them, put them together and pull them apart. And I wanted to make something lovely. But the loveliness existed when no-one could see it, as well as when it was tarnished by my pushing it under the world’s nose like a beauty-pageant mum.
I wrote this piece because I wanted you to notice me. But publishing as a look-at-me contest makes me feel nauseous. Makes me phobic of defining myself as a writer. Makes me use a pseudonym. Makes me commit Writer Hari Kiri by vanity-publishing my second book and ensuring that no proper publisher will ever add it to their list.
Look at me, I’m an idiot. Look at me, I failed - and that was my final success.
Dance Your Way to Psychic Sex is available exclusively from danceyourway.co.uk
Posted by Caroline Rance at 06:00

Hi Alice - a post that's brave, candid and true! I'm fascinated by the two sides of writing, or the two sides of me that it brings out - the introvert who needs to use words to feel 'grounded' and the attention seeker who wants others to read them. Sometimes I feel (thanks to t'internet and all the opportunities it gives us to communicate) that the 'show off' is getting in the way of the writer. Thanks for expressing it so well, and best of luck.
AliB

My gosh, Alice, that's a brave and wonderful post - thank you so much for it. It totally sums up my own feelings about writing and visibility and performance. How very courageous of you to turn your back on the 'traditional' publishing world - I wish you the very, very best of luck with this new book.
Susiex

Blimey. That was a bit like being hit by an unexpectedly gnarly wave whilst standing in the shallows.

Thanks for sharing this compelling and honest post, Alice. It made me question the reasons that I write. So what would you say your motivations are now you've become sickened of the 'look at me' aspect of the business - just focusing on writing something good?

I have such an inferiority complex I've never really tried to get published. I write because I love it, but I don't suppose it will ever go further than that. I'm not 'look at me', I'm 'don't look at me'.

Yes, I'm trying to hold onto writing for writing's sake at the moment. It seems that the marketing side of writing often takes too much of our energy that we should devote to our passion..... WRITING.... It's a craft and a gift.

A refreshingly honest post. Wishing you lots of luck with the new book.

James, I won't be writing at all for a while - my new career (and two small children) make it impractical. I often suspect the new career was a subconscious act of self-sabotage.

But I will write again, and when I do... I dunno. Showing off is in my bones, so I'll always want people to read what I write. But I'll try and remember to do it mainly for its own sake.

I also hope I'll remember that I decided writing is much better as a hobby. And that I don't need fame or fortune, and that self-publishing is more fun.

Of course if the industry came chasing after me and offering great things, that would be hard to resist. But it's unlikely.

Isn't showing off just another way of saying you enjoy expressing yourself? Actors do it for a living, so do stand-ups; so why not writers?

Thanks for sharing this, Alice. And good luck with the new book!

hi
i hope i enjoy my stay here


pls be nice to me