Simon Mawer is an engaging storyteller whose style of prose elevates his writing above that of many of today’s authors. I‘ve read many of his books including The Glass Room, an incredibly moving and atmospheric tale of architecture, loneliness and love, The Gospel of Judas, Mendel’s Dwarf, Swimming to Ithaca, set in Cyprus where Mawer spent some of his childhood, and The Fall. I talked about The Glass Room some time ago when I first read it because it was one of those books you feel you have to recommend to friends or indeed to anyone remotely interested in good literature. It blew me away and I immediately got caught up in the turmoil along with the characters.


It was shortlisted for the Man Booker Prize and quite rightly so because the book is a real page turner, one that I couldn’t close even though it was going on midnight. Its central idea is the modernist Landauer House which was constructed for newlyweds Viktor and Liesel. But as World War Two threatens and Nazi troops enter Czechoslovakia, the family, along with Viktor’s lover Kata and her child, are forced to flee. I won’t take you through the whole synopsis, for fear of spoiling any interest I’ve managed to whip up, but I do thoroughly recommend this book. If you choose to read this one, I guarantee it’s one you won’t fall asleep to because of the wonderful intensity of the characters and prose. I was sorry I hadn’t discovered Simon Mawer prior to The Glass Room and I asked myself how he had managed to slip through the reading net.

I went on to seek out more books penned by this talented writer and opened The Gospel of Judas. It was a fantastic read, fast paced and cleverly written, all about papyrology. The story involves Father Leo Newman's discovery of a lost papyrus scroll near the Dead Sea which looks to contain a fifth gospel, one that follows Jesus' life and crucifixion from the point of view of Judas Iscariot. And it has a love story thrown in for good measure – the choice between God or a woman.

For the scientists among us, there's Mendel's Dwarf with the central character, Dr Benedict Lambert, a top geneticist who is a descendant of Gregor Mendel, the Austrian monk. Essentially, Lambert is a dwarf and he attempts to isolate the gene that gives rise to achondroplasia (dwarfism) but while his public life revolves around scientific issues, his private life is centred around pornographic magazines. 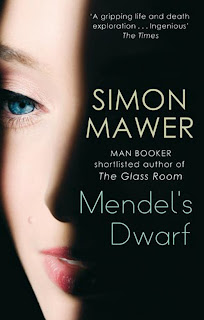 Simon Mawer was born in 1948 in England, but has lived for more than 30 years in Italy with his his wife and two children. He graduated from Oxford University with a degree in zoology. If you haven't read any of his books, I implore you to just dip into one and read the first chapter.

And on a final note, Simon Mawer’s literature has been endorsed by a celebrity - Britney really IS singing Gimme Mawer, because she’s so well read.