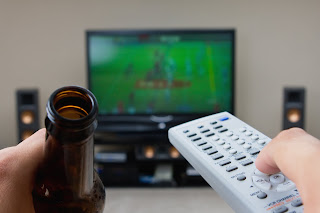 It's not all work, work, work for us Strictlies. Here's a round up of what we've been watching on television or at the movies. Tell us what's had you hooked lately...

Caroline G has been enjoying Mad Dogs on Sky One and is sad to have reached the end of the series.
"It was a real treat to see some of my favourite actors, including the divine John Simm, having such fun with a cracking script," added Caroline.

Debs is still loving 'Call the Midwife' on Sundays, 'Being Human' and 'Whitechapel' although the family still watches the fluff like 'Take Me Out' and 'Million Pound Drop' (isn't Davina McCall THE most infuriating woman on tv?)

Caro went to see The Artist and found it delightful - she loved the atmosphere and heart-warming humour.
"The dog deserves an Oscar," added Caro.

Helen watched Public Enemies, a Tony Marchant drama about a released murderer and his parole officer. It was so good she watched all three episodes back to back.

Rod watches very little television, only the news and movies. At the weekend he watched a gruesomely realistic British film about marital abuse called Tyrannosaur.
"Amazingly well acted. Brilliant script and deeply upsetting. I wish I hadn't seen it. There are things there I don't want to watch for entertainment. Yes. Very good," added Rod.

Gillian is watching Masterchef and this fabulous show on Watch HD called Too Fat For Fifteen. It follows overweight children as they re-establish eating habits at the Wellspring Academy of the Carolinas, USA.
"It shows that not all weight problems are attributed to a love of food. Highly recommended!" added Gillian.

Tell us what you're watching and why.
Posted by Caroline Green at 06:00

I saw Essie Fox on The TV Book Club too and I'm looking forward to reading her novel.

I often wonder where I find the time to write as I watch a load of documentaries. Sometimes it's easier at night to put your tired feet up and watch telly.

Oh Susan, so do I. So much so that we are in the very early stages of planning a short break in it!!! :)

I'm hooked on "A Gifted Man". I suppose because it combines my love of medical drama with a touch of paranormal and a hint of romance.

I actually don't watch tv. Really. I'm so busy writing I can't find time for much of anything.

Helen I want to know the name of the Tony Marchant drama and where I can get it. Is it still available on I-player and why have I missed it?

I have started watching and loving "Homeland" - Clare Danes is a highly intelligent actor and there's a bit of a Sarah Lund flavour to her character.

Sorry to see "Call The Midwife" go but I'm sure it'll be back soon. Really enjoyed the first episode of "Upstairs, Downstairs" on Sunday - anything with Ed Stoppard in it is OK by me.