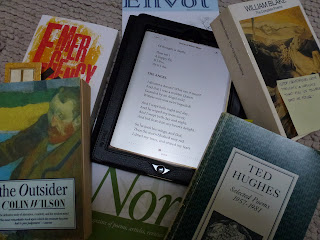 Do you sometimes read like a magpie? I do. I think it's one of the best ways for a writer to read. By flitting from book to book, author to author, subject to subject, I find I can plunder small neglected items of inspiration (old silver teaspoons, hairclips, etc). And it means you don't get steeped in someone else's voice ("the way butter is tainted by garlic in the fridge" sorry, I don't recall who said this, perhaps you can remind me).

Yesterday I was browsing through some Ted Hughes poems. He's been on my mind recently. I came across Ghost Crabs, a poem I've read before but which has never properly entered "the dark hole of the head". It's a strange poem about a bunch of crabs that take over our beings at night, creeping up from the sea.

And so on: it's a feel-good piece. Watch out for those crabs!
I wanted to know more and got to work on Google. That led me to an essay on existential philosophy on a now-defunct magazine site dedicated to Colin Wilson. Apparently Hughes is representing ideas about the will from Schopenhauer. Fascinating stuff, but no more upbeat. That cost a couple of hours leading eventually to dusting off my ancient copy of Colin Wilson's The Outsider - that ultimate cult book. I had part read it twenty years ago, but was slightly put off by the evangelical fervour for Wilson Worshipping by certain friends back then.

That led to reading about Gurdjieff and searching the web for whatever I could find about Ramakrishna. By now I had enough ideas for a volume of verse or a couple of novels, but I couldn't stop. Like a runaway mobile library, I ploughed on through the rest of Wilson and that led to Blake. I took down the huge brick that is The Complete Poems, but nearly broke my wrist trying to open it. So I went to ibooks instead - I'd downloaded Blake last year. The internet and ereaders are perfect for the magpie, aren't they? You have access to more sources than a university library, without leaving your chair.

Blake had me reading a strange poem called The Angel, where William becomes a "maiden Queen". Strange thought, and I've yet to research that one. But next to it is The Tyger so we're back on safe ground again.

The line "Did he who made the lamb make thee?" stopped me in my seat. Although I've known that line for ages, as I'm sure you have, it brought me to tears.

And that led to this idea for a Strictly Writing post (so I did get something from all that crashing about).

What one-liners can make you cry?

There are many for me. I have to admit to a few in The Lord of The Rings. Also from Eliot's Portrait of a Lady, the line(s)

I smile, of course,
And go on drinking tea.

That always gets me. What about you?
Posted by Roderic Vincent at 06:00

I love this one from Anais Nin: "And the day came when the risk to remain tight in a bud was more painful than the risk it took to blossom"

"At the going down of the sun and in the morning we will remember them."

This gets me unfailingly.

And this:
"But now I am six I'm as clever as clever. So I think I'll stay six now forever and ever."
(Though strictly speaking that may be two lines.)

Walter Raleigh (honestly!) - 'Give me my scallop-shell of quiet' - I now have a scallop shell on my desk, to remind me to shut down the head-clamour and let out the whispers underneath.

Wow! Those are all amazing. Geri, yes, no matter how often I hear that line, it brings a lump to the throat.

Do not go gentle into that good night,
Rage, rage, against the dying of the light.
Dylan Thomas

Ok, that was two lines admittedly

Hello, Rin! *waves* - love the Anais Nin quote.
Mine is from Mary Oliver's poem, The Journey, which is one of the most poignant I've ever read (and yes, sorry Rod, it's a cheat because it's lots of (poem) lines, but just one sentence:

'But little by little
as you left their voices behind
the stars began to burn
through the sheets of clouds
tnd there was a new voice
which you slowly
recognised as your own
which kept you company
as you strode deeper and deeper
into the world,
determined to do
the only thing you could do -
determined to save
the only life you could save.'

Yes, Geri! I love the Remembrance one.