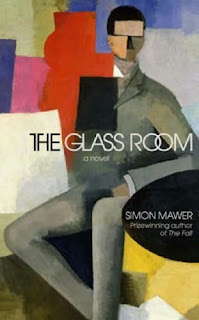 A book which has burrowed its way into my innermost thoughts recently is The Glass Room by Simon Mawer, an intelligent tale set in the former Czechoslovakia focusing on the themes of art, loss, love, fear and betrayal.

And architecture too! Yes, that particular theme is one of the most prevalent running through this novel, and an unusual one too. In the book, wealthy Jew Viktor Landauer and his wife Liesel have been given a gift of land by Liesel's parents to build their own home. Not wanting something traditional, Viktor seeks out the modern and goes ahead with plans to build a glass room - Der Glasraum. The architect employed by Viktor is Rainer von Abt, a man whom the couple met on their honeymoon and one who is deeply moved by innovation and progress.

The Glass Room is not merely a room per se in the novel: it forms the structure of the book – think of a roof under which all the characters interact. The storylines develop under this roof and the glass room becomes the focal point of all manner of activity.

However, as the story progresses, the Glass Room is removed from the Landauers and taken over by the Nazis for scientific experiments, and then claimed by the communists, before becoming a museum, and the site for a final scene of redemption.

The fact that it's made of glass allows the reader to see into the lives with ease, the character are exposed, laid out before us...naked. It's voyeuristic and the many encounters between different couples threaten to throw the plot off course. The historical events too are drawn to the house, taking place within its walls, rather than in the great wide open.

A surprisingly easy read, I was engaged from start to finish. The fluency of the language, the ideas and Mawer's characters all combine to make a flawless novel.

This is Simon Mawer's eighth novel and he's an author I want to know more about. I've got my hands on a copy of The Gospel of Judas and I'm reading it once I finish We Need To Talk About Kevin. I remember reading a review of this book shortly after it was released and the reviewer said that once a film is made of this book, the story will be completely spoiled. It was shortlisted for last year's Booker Prize and quite rightly so. I want to know why it didn't win.
Posted by Gillian McDade at 06:00

Oh you devil you.
Nothing makes me want to read a book more than someone saying how much they loved it. And I already have a to-be-read pile that is teetering on my bedside table.

I also really admire writers who can use a setting to such effect.It's one of my very weak points, I freely admit.
Characters, plot and dialogue - all fine. Setting? Not so much.
HB x

Me too! I want to read this, but I just took delivery of a whole box of books for research.

To be honest Helen when I started reading it, I really didn't think I'd love it so much. But I did! And I think I read it in six days. So pop over to Amazon now!

Go on, read it Rod, you know you want to! I was initially attracted by the cover.

Gawd...I've just counted my 'to read' pile and its eleven books - now twelve! Still going on holiers soon so should make my way through a few then. Fx

This sounds like a fascinating book, Gillian - will look out for it. I too have a toppling pile of To Read books - just bought Barbara Trapido's Sex And Stravinski which, apart from having one of the most beautiful covers I've ever seen, sounds as brilliant as ever.
Susiex

I'll put that on my Amazon wish list, Susie :)

Thanks for this review. This is now on my wishlist!

I loved it that Hilary Mantel won last year's booker prize for her Wolf Hall (that I thoroughly thoroughly enjoyed) so it will be interesting to read this one that was shortlisted with her.

Or Wool Fall, if you rely solely on the spell checker, Kitty! ;) (see previous post!)

Interesting...when I first started reading your post, Gillian, the word 'architecture' just felt very off putting. I'm really turned off by descriptions of buildings as a rule. But as I read on, my opinion completely changed so I would definitely look out for this now.

Old Kitty, I keep circling round Wolf Hall and then being too scared of the commitment! I heard a great interview with Hilary Mantel about this though [if you Google 'iTunes meet the author' you will find it] and it did intrigue me..

I'm reading Woolf Hall atm and really enjoying it. Must say this review doesn't make me want to rush out and read it, though. Is there any humour in it? I can't bear novels that lack humour, even if it's a tragedy.

No, there's no humour in it whatsoever, Geri!