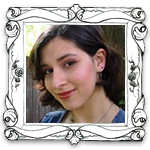 Steph Bowe, 16 year-old YA author of 'Girl Saves Boy' (her debut novel which will be published by Text Publishing in Australia & New Zealand in September 2010 and by Egmont USA in America in 2011) has a fabulously entertaining and informative blog all about reading & writing YA fiction at Hey!Teenager of the Year and lives in Victoria, Australia.

The first time we met, Jewel Valentine saved my life.

Isn’t it enough having your very own terminal disease, without your mother dying? Or your father dating your Art teacher?

But the real question is: how does he end up in love with Jewel Valentine?

With the help of quirky teenage prodigies Little Al and True Grisham, Sacha and Jewel have a crazy adventure, with a little lobster emancipation along the way.

But Sacha’s running out of time, and Jewel has secrets of her own.


***
My literary hero/ines:
Samwise Gamgee of Lord of the Rings remains my biggest fictional crush. As for heroines, it has to be Alaska from Looking For Alaska by John Green.

Best and Worst things about writing?
Best: being able to make something out of nothing.
Worst: feeling like a hack. All the time! It's awful.

Longhand or computer?
Computer! I'm a teenager, it's a disaster. Can't live without technology.

My journey to publication was...
Very fast and incredibly overwhelming. I was very lucky things happened so quickly for me; they still feel surreal!

Favourite writing snack?
Vegemite on toast! And a cup of tea. And maybe an ANZAC biscuit.

The best thing about having a book published is...
My family being so excited! I think they're even more excited than I
am. There are many great things about it, though...

When I’m stuck for ideas, I……go out and live life. A new great idea will find me when I'm busy doing something else.

Win Booker prize or land Hollywood film deal?
Hollywood film deal! I want my own Steph Meyer moment, where I'm sitting at the bar with my laptop, and the waitress gives me a drink and she says, 'Here's your usual, Stephanie.'

Character first or plot?
Character, 100%. My books are far more character-driven than plot-driven.

Ideas come to me when…I have nothing to write them down on! Very inconvenient, ideas are.

An author should never... Badmouth anyone else in the industry. Not publicly, at least.

Independent bookshop or Amazon?
Indie!! Is there any other way?

You really must read...Will Grayson, Will Grayson by John Green and David Levithan. Must!

Left on a cliff-hanger or told all?
Told all. I don't like series, I like my stories wrapped up with a bow.

My biggest tip for any writer is… Write as much as you can and never let anyone dissuade you from writing. Anyone can be a great writer. All you must do is write!
Posted by Debs Riccio at 06:00

Great interview, Steph, and well done on your success.

Wow! All the way from Down Under - congrats on your success so far, Steph, and may you have many more years to come. I'll look out for your book. Thanks for your participation!

Wow! Just shows what can be achieved in a relatively short time - hopefully you will inspired other young writers to go for it.
Susiex

I am in awe at someone who has done so much at such a young age.
All power to you.
HB x

Thank you for interviewing me, Debs & thanks for the kind comments everyone! :)

I'm so intrigued by the lobster emancipation, Steph! You've already achieved something amazing by the age of 16...the sky's the limit for you, methinks. Thanks for stopping by at SW.