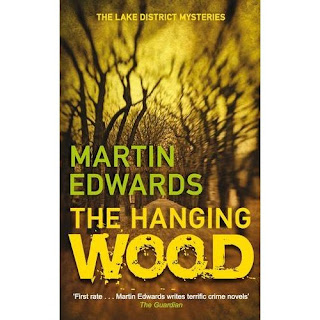 Martin Edwards was born in Knutsford in 1955.
He studied law at Oxford and studied to become a solicitor in Leeds. He then moved to Liverpool on qualification and continues to live and practise there.
In addition to his legal skills, Martin is also a prolific and talented crime writer. His debut novel All The Lonely People was published in 1991 and nominated for the John Creasy Dagger for best first crime novel of the year. A further fifteen books followed and his latest The Hanging Wood was released at the beginning of August.


Which three writers, living or dead, would you invite to dinner?
GK Chesterton, Dorothy L Sayers and Anthony Berkeley (aka Francis Iles) because they were not only fine crime writers, but complex, strange and fascinating people who were never lost for an opinion.


What's your favourite writing snack?
Coffee and a Mars bar.


Longhand or computer?
Computer- But I've just started using voice recognition, and I'm wondering if this will affect the way I write. With any luck it will improve it.


Win Booker Prize or land Hollywood film deal?
Hollywood, no question. Doesn't matter if the film doesn't actually get made. In fact it might be better that way...


Tabloid or broadsheet?
Broadsheet, but read online. I enjoy seeing how different political perspectives influence choice and treatment of story.


Independent bookshop or Amazon?
Both. Amazon is great, but I love real shops, including second hand specialists. An annual trip to Hay on Wye is a must!
Hacker or adder?
Hacker. Death to all adverbs.


Plotter or pantser?
Plotter (is this becuase I've spent too long as a lawyer?). I always know what the 'solution' will be, but I don't usually know how I will arrive at it. As I've grown in confidence, I've tended to plan less.


Leave on a cliffhanger or tell all?
Resolution is good, but I also like an element of ambiguity. The snag with ambiguity is that it can irritate the reader. But handled carefully, it makes the story more believable.


You really must read...
Catch-22 by Joseph Heller, A Fatal Inversion by Barbara Vine, Ukirdge by PG Wodehouse and Billy Liar by Keith Waterhouse.


I get most excited by...
Travelling abroad with my family, meeting readers, discovering talented new authors...and Manchester City getting the upper hand over Manchester United.


If I wasn't a writer I would be...
Missing a huge amount of pleasure (as well as the pain that goes with the territory).


An author should always...
Remember and respect the reader.
Posted by Helen Black at 06:00

Ha! The Man U comment made me laugh! Interesting that your law background makes you more of a plotter...

I'm not sure what hope there is for me. I used to be a relocation agent i.e. Phil and Kirstie without the cameras.

Thanks so much for dropping into Strictly Writing Martin. F

Thanks for coming to Strictly, Martin. :)
I am envious of your prolific-er, ness. Is that a word?
Susiex

Thanks, Fionuala. Relocation agent? Yes, plenty of potential there!
Susie, thanks. If it isn't a word, perhaps it ought to be...