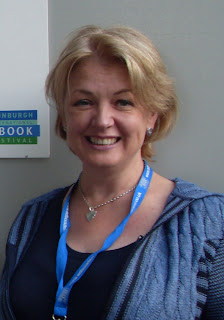 Gillian Philip lives in the north of Scotland with her husband, ten-year-old twins, two dogs, two cats, a slayer hamster, three chickens and several nervous fish. She writes anything that comes into her head, including fantasy, crime, science fiction and horror. Her books include Bad Faith, Crossing The Line, The Opposite of Amber and (for Hothouse Fiction) the Darke Academy teen horror series. Firebrand, the first of four novels about the Scottish Sithe, was published last year and the second episode, Bloodstone, comes out this August. She has been writing all her life, but has also tried proper jobs as a record store assistant, theatre usherette, barmaid, sales rep, political assistant, radio presenter, typesetter, and singer in an Irish bar in Barbados.


Christopher Hitchens, Richard Holloway and CS Lewis. That ought to be good.


Coffee and an occasional cigarette… which I’m giving up. (No, honestly I am.) I like being slightly hungry while I’m writing. It’s harder to write when I’ve just eaten.


Longhand notes and then computer all the way. I’m more inclined to lose notebooks (or have them eaten by dogs) than I am to delete files accidentally.

Broadsheet, usually the Times. But I stand in Tesco for ages reading the good bits in the tabloids. And I love a good Sun headline. They are an underrated art form.

Both. And my lovely local Waterstones. Um, I buy too many books.

Adder. I have to race to get the plot down because I need to find out what actually happens (see following answer). I like going back and adding in scenes and conversations and incidents. It feels positively relaxing.

Seat of pants. I start with a scene and a character. But I like to have an idea where it’s going by about halfway through or I start to panic.

Complete cliffhangers are annoying. Even in a series I like to round off any particular episode of the story into a sort-of ending. But tell all? Heck, I don’t even KNOW all.

How Mumbo Jumbo Conquered the World by Francis Wheen. And every single Calvin & Hobbes book ever. That strip is a masterpiece of storytelling, draughtsmanship, character, conciseness, care, and knowing when to stop.

The lightbulb moment when I see how a book is going to work without everyone dying.

Incredibly bored and boring, and trying to retrain as a forester.

Avoid self-indulgence. Except with whisky, pasta and chocolate.
Posted by Caroline Green at 06:00

Your answers made me smile.
Thanks so much for coming on.
HB x

I haven't read Gillian's others yet but The Opposite of Amber was one of the best YA books I've read. Brilliant.

Ooh, I feel better having read your answer about pantsing - will relax now until I get half way through!
Thanks so much for coming to Strictly.
Susiex

This was really fun to do - thank you for inviting me!

You have a terrific sense of humour. It didn't produce a burst of laughter. I was at an outdoor cafe. Instead it was a giggle that rose from the pit of my stomach. My tummy bobbed and jerked while I tried to keep a straight face. I ordered a coffee while continuing to giggle. The girl asked,"Are you all right, Sir?" I checked my pacemaker. It was workin' fine.