When art forms come together 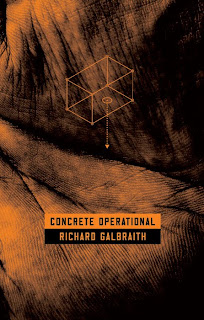 Question - When several art forms come together what do you get?

Answer – a collaborative project which, some say, will be the future of the publishing and creative arts industry.

Operation Concrete is an independent project, sponsored by the Arts Council of England, which brings together the work of five artists and five bands around the themes of emotion taken from the debut novel by its Creative Director Richard Galbraith.

In the book Concrete Operational, the readers will be swept along on a rollercoaster of emotions, from desire to love, jealousy and madness. What sets this particular book apart from the mainstream publishing industry is that the book is more a 'project' as it is complemented by a book of art and a CD featuring five music tracks.

The book follows Germany, a man who has been turned into a celebrity against his will. The story is about the human condition and delves into the emotions, and while surreal at times, is an enjoyable read and not like anything I've read previously. Admittedly I did find the book quite hard-going and intense at time, due in part to the immense detail in every sentence, but I admire Richard for his perseverance in writing a novel which is not genre-specific nor mainstream.

Now to the art – I'm no expert in art, but I did find the images, which are all of the human form, quite captivating and disturbing at times. And the music – well, it's a variety of styles which will intrigue fans of any genre. It complements the book and the artwork well.

Richard firmly believes that a rich immersive experience can be realised through the collaboration between art and music and visuals. And it's true. This is an 'experience', rather than a book, art work and music as separate entities.

"We think that the people who read books love them, they love the written word, but they also love music and art and architecture and design and anything creative, and we want to provide them with rich, immersive experiences that encapsulate their minds and imaginations," he said.

"Furthermore, a lot of work has obviously been put into sourcing the collaborators as well as trying to get it to fruition. Having experienced my first collaborative project, it's definitely something I'd like to see more of in the future. There are so many more marketing and promotional opportunities for a mixed media project such as this."

Strictly has one box set to give away, courtesy of Richard. All you have to do is leave a comment below and we will pick one at random.

You can visit the website Operation Concrete to sample some of the art work, listen to the music and view the short movie. Readers can buy the novel, the 70 page art book, or five track CD album individually, or as a limited edition, hand made package containing all three. the box set can be purchased through the project’s website.
Posted by Gillian McDade at 06:00

Good for Richard and all fellow-collaborators. I've enjoyed running multiple art collaborations for a couple of years now, culminating in our current multi-format multi-art exhibition at eight cuts gallery that combines literature art, film, and music without being baseed in any of them. I absolutely agree audiences get more this way - by combining the senses you impact, and through the possibilities for curation (we dart around through curated hyperlinks - the words the audience choose to navigate from being part of what creates the experience). It also makes for a great live experience./ The key, and it looks like this project does it very well, is to keep tight control of a central idea then let all the creatives leap off in different directions - that way the audience are always aware their thoughts have a certain grounding, and a certain freedom, which can create a dazzling layering of concepts and sensual experience.
Thanks for the tip-off - will most definitely run this on our "we recommed" slot at the start of November. Any of your readers near Oxford who want to see what a multi-arts live exhibition is like, do come along to the O3 Gallery on November 18th
http://eightcuts.wordpress.com/events/eight-cuts-live-at-the-o3-gallery/into-the-desert-live/

What a fantastic idea! I love the idea of artists collaborating on a joint project like this especially as I'm sure each would inspire the others in ways they could not have imagined before working together.

With my own writing I often find photographs really useful for getting me started on a new short story. There is something about that one frozen glimpse into another world which gets me thinking about where I could go with a story.

What an interesting and original idea...