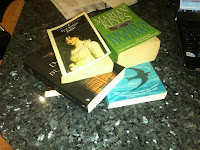 Have you ever been on the end of a cringeworthy chat up line? You know the type: "Get your coat love, you've pulled" or the one that I married, "Dance with me. I'm avoiding the girl behind you." Well, they say first impressions count...

As writers, we are so often told about the importance of the first three chapters, the first chapter, the first five pages, the first scene and indeed the first line. While thinking about today’s post, I ran my fingers along the spines of my bookshelves and pulled out a few of my novels. The intent was to read the first few pages of each book again, but in fact, I found myself getting hooked on the real first impression, that is the very first line. And it proved to be a totally fascinating exercise!

Here are a few examples and my instinctive thoughts on reading them:
1. “The boy followed the guard along the corridor, watching the sway of his wide backside and the belt with its handcuffs and baton and the big bunch of keys that jangled as he walked.” (Extract from ‘The Brave’ by Nicholas Evans)

Nicolas Evans' first novel, “The Horse Whisperer” is still one of my favourite books. His use of imagery without being too weighed down by a multitude of words had me hooked from the start. Here in his latest novel, which by the way I haven’t read yet even though it’s on my bookshelf, hints at things to come. A fairly long first sentence, delivering two potential characters, one obviously a policeman and one a child/boy already gives us a hint of Evans’ style.

2. “Gradually, Caroline returned to her senses.” (Extract from ‘The Legacy’ by Katherine Webb)

A debut multigenerational drama, which made its way to the TV book club selection and was, as a result, a huge success. Though there’s not a lot revealed in this first line, I still want to read on. I want to know who Caroline is and what had happened her.

3. “Emma Woodhouse, handsome, clever and rich, with a comfortable home and happy disposition, seemed to unite some of the best blessings of existence; and had lived nearly twenty one years in the world with very little to distress or vex her.” (‘Emma’ by Jane Austen)

A big yay for Miss Austen! God, she used a lot of words to say - Emma at twenty one had so far led a charmed life! I do love her books, but wonder even in today’s historical fiction genre if a debut author with such a first sentence would get past the slush pile intern?

4. “It happened every year, was almost a ritual.” (‘The Girl with The Dragon Tattoo’ by Stieg Larsson)

The first in the first book of his Trilogy. A brief sentence, but clever in that we want to know what ‘it’ is straight away.

I guess I ask the question, ‘why’?

I’m not sure why, but this is one of my favourite first lines!

7. “ They said I was a drug addict” (Rachel’s Holiday by Marian Keyes)

The Queen Keyes... She is, in my humble opinion, the queen of chicklit/women’s drama fiction. And just as I was thinking there’s obviously a trend in short snappy sentences with recently published commercially successful books – I check the inside cover of my well thumbed copy, only to see it was published in 1998! Bang goes that theory...

All in all, a fascinating exercise and one I recommend doing particularly if you’re writing in a certain genre. Check out a few of the competition's first sentences? Of course the exercise wouldn’t be complete without reviewing both my as yet unpublished novels and fessing up to their current first lines. (Would YOU read on??!!)

‘Journey To The Monkey Nut’ - “My husband is a philanderer,’ I answer her question.”
‘Plumb Crazy’ - “I follow Mama into the garden.”

What have I learned? Well over six hundred words of a post and all I can tell you is I seem to favour short snappy opening lines! And that I've decided to use that chat up line of my husband's as the opening for a future piece. Think of the variations that could follow, "Dance with me. I'm avoiding the girl behind you..."
Posted by Fionnuala at 06:00

Jane Austin? It's Austen. The rest of the post was good.

That would be a brilliant first line Fionnuala. It hints at someone with a sense of humour to me :o)

My novel opens with the line, "It was exactly four weeks, sixteen hours and thirty two minutes until my wedding day" which I changed about a hundred times over the course of writing the book, before reverting back. Sometimes you get it right first time!

I'll be off to check my bookshelves now ...

Oops Anonymous - you are of course correct. Am off to sit on the naughty typo step...

PS Have corrected glaring error before I sit on step

I think this is such a good idea...I'm going to go and look and first lines of my favourite YA novels right now. Thanks Fi!

Fascinating post, Fionnuala. *gulp* My first line is:
'Out again?'
This led me to looking through the shelves of the house I'm house-sitting in and pulling out random books.
"'I had a disagreeable dream,' the old man said." (John Mortimer - Paradise Postponed)
"I am the oldest woman in Top Shop." (Judy Astley, Blowing It)
And: "It was a cold grey day in late November." (Daphne du Maurier, Jamaica Inn)
Hmm.
Susiex

The opening line of my recently published e book is

'The swaying sunflowers of Gascony radiated a warm welcome of saffron some months before it all happened".

I wish I had made it shorter and snappier. Your idea of that brilliant chat up line is great!

The 'Manderley' line (also one of my favourites) regularly wins awards for best or favourite first line of a novel.

My all-time favourite is another Du Maurier, 'House on the Strand', but it's another one that would fail the slush-pile test these days because it's very long and *gasp* descriptive.

Ha! I *heart* the idea of your husband's chat up line as an opener - I'd definitely read on - he sounds like one of Jen Crusie's MC's!
One of my all time fave openers is actually the whole chapter.... "I haven't been dead for 68 days now" (or something like that) Mill Millington's 'Love and other Near-death Experiences'. Fab book.
My three books all start snappy:
'Labrats' - "This wasn't how it was supposed to happen."
'Life Lopsided' - "My left boob is bigger than my right." and
'Double History' - "This sucks."
You'd think SOMEONE would want to read on, right?!

Interesting post, Fionnuala. I think the importance of a first line that hooks you in cannot be underestimated...