We're thrilled that Lisa has found time in her busy schedule to Guest Post on StrictlyWriting. Her new book, 'After the Party', the much-anticipated sequel to 'Ralph's Party' (Lisa's best-selling debut novel of 1999) is published tomorrow and you can read an extract from it  here.

And here's what she said about writing it... 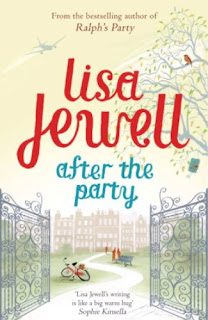 "Many moons ago, I was looking at the prospect of renewing my publishing contract and feeling rather nervous. My previous two books had sold well, but not in proportion to my advances for them and I felt that my publishers were slightly deflated about things and slightly at a loss as to how to progress my career. I kept giving them books to publish that were good and nice but not very easy to pigeonhole (odd-looking reclusive poets in ramshackle houses for example.) So, for the very first time in my writing career I thought not about what I wanted to write next but what I thought my publishers would like me to write.

And it came to me: A Ralph’s Party sequel! I'd always said I would never, ever write a sequel. Once I've spent a year to eighteen months in the company of a group of entirely imaginary people I'm pretty much done with them and ready to meet some new people. But I felt I needed to up my game and writing a sequel to the book that had started my career all those years ago (and remains, to this day, the biggest-selling of all my books) was going to make a lot of people very very happy.

So I began to plan it in my head. And as I thought about it I realised immediately that it would be a perfect opportunity for me to write a book about a modern relationship, about one of those equal pairings formed in curry houses and beer gardens and to examine what happens to those trendy, carefree lovers after children arrive on the scene. I knew then that it would not be a contrived set-up that would include all the old players from the original as of course in real life they would not still know each other. Instead I focused on Ralph and Jem, ten years and two children down the line. I wanted their problems to reflect my own problems so set it just after the arrival of their second child, which was one of the toughest times for me and my husband in the fifteen years we've been together.

And then of course I had to write the thing. It was the most challenging book I’ve ever written. I'd thought it might be technically difficult to write about people I hadn't thought about in ten years, to make sure my references to the original book were subtle and natural and to make it readable for someone who hadn't read Ralph's Party. But actually, the technical aspect wasn’t hard at all. The hardest thing was balancing the need to portray total and utter reality, the moment by moment, second by second deterioration of a relationship with keeping everything moving along with a proper storyline. That was a tough balance to strike. If I'd let the story take over the book would have lost its authenticity, but without the story it would just have been a turgid journey through the minutiae of somebody else’s marriage.

When my editor read it she said the main problem was that she’d found Jem, the female character, unsympathetic. I found that really hard to come to terms with as so much of Jem’s persona and inner workings were based on my own and in fact I'd tempered a lot of it already to make it more palatable. I was worried that I was watering down the stark reality of long-term love to the point that the book would lose its potency, but I did it anyway. I rewrote and rewrote and rewrote for three long, hideous months. By the time I'd finally laid it to rest I was dizzy with it, had no idea what I'd written, what it was about or if anyone would even like it. But now, two days before publication I can see that it was all worth it. The book is striking a chord with people and I can finally breathe a sigh of relief.

Would I write another sequel? Well, you never know, maybe in another ten years, if I REALLY REALLY had to .."
Posted by Debs Riccio at 06:00

I've had several comments from magazine editors that the MC in a story is unsympathetic and it's invariably when they have too many elements of me in them!
Those stories are also the ones that I find hardest to change, but maybe too much 'reality' can be unpalatable for the reader - or maybe we're just too hard on outselves and, actually, we're not that bad from the outside.
Whichever, well done on striking the balance and I hope the book is a great success for you.

I sometimes wonder are we being denied views of real life by the appetite of the mass of readers for a dreamy sort of life. I'm not a big reader in that particularly market but have read a few recently and while some are entertaining enough the final impression on me is one of insipidity, but these are the big sellers and good luck to those who are able to row along in that stream. I doubt that publishers would get excited about their profits on my tastes which are more towards the serious. I do try to write sort of romance fiction but invariably by the time I've gotten a bit into the story I've forgotten the names of the characters and rename them - saves time searching the muddle.

I admire the skills of those who can get a bunch of characters together and keep things going, for, my gosh, a few hundred pages.

Fascinating. I find it frustrating to think that character needs to be cleaned up before presentation to a readership, that we can't portray the selfish, ego-centric reality. I suppose one way out of that is comedy: readers will put up with odious MCs if they are funny enough. Homer Simpson and Ignatius Reilly come to mind, although in the latter case the author was dead eleven years before anyone published him unsympathetic main character.

It's horrible when you put so much of yourself into the one character in your book that everyone finds 'unsympathetic'. Perhaps we're all freer and easier when you put ourselves in to a completely different persona.

Really interesting post, and all best wishes for the new book.

I read this with interest, Lisa. That must have been really frustrating for you but it's great to see you persevered and that the book is a winner! Good luck with it.

Another post that reveals beautifully the blood sweat and tears that go into writing a novel. Thanks for taking the time to be with us Lisa and very best of luck with the book.
Now, I'm off to persevere with mine...

What a fascinating post. Lisa's novel 'Ralph's Party' was the book that got me into chicklit all those years ago and her huge success has been an inspiration.

Now I'm published myself I can really relate to her battle between creating an authentic storyline and characters appearing unsympathetic. I've just received editorial comments on my second book and received similar feedback on two of my characters. Now the hard work REALLY starts...

So thanks Lisa, for such an honest blog post - yet again you're an inspiration (it's reassuring that even bestselling authors have the same problems as the rest of us!)

It seems to me that for at least some writers, taking a whole novel to get to know the characters is just about right. Then they are established and understood, nuanced and ornamented. Now the writer can begin using them. I see no hesitation in my own creative mind to using an established character as a minor character in another bit of fiction I write.

I'm glad to see you've found a way to revisit your most successful characters.

My copy of 'After the Party' arrived this morning! Thanks so much again Lisa for taking time to post for us - as Cally says, you're an inspiration to so many with your memorable characters, situations and effortless style. Another undoubted bestseller.
Oh, and I can't wait to find out how Vince and Joy are getting on....after all it does say 'The beginning' at the end of that book...and that was a hint, right?

Lisa, thanks for your very honest post. Very refreshing and inspiring.
Susiex