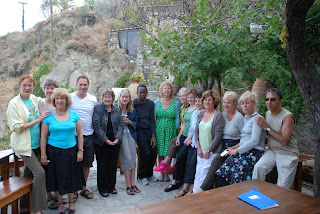 Help! It's Sunday evening and I'm supposed to have a Strictly Writing post ready for six tomorrow morning. I don't want to miss my turn and let my colleagues down, but I've nothing prepared. I feel like the boy who left his homework on the school bus. Normally I squirrel my posts away in good time, so they are stored up for emergencies like this, but now the cupboard is bare. The pressure is unbearable, an immediate and urgent version of writer's block. This must be how journalists feel, Caroline? Gillian?

All I can offer is excuses, but at least they are writing related. As usual with me, they are also alcohol related. You see, I invited the people we met on a holiday on Skyros over for a reunion writing workshop, and I made the mistake of billing it, "Weekend with wine and writing" on my facebook page.

It was two years ago that we all met on a course tutored by the adorable and immensely talented Michele Roberts. During the week in Greece she set a series of assigments to be completed in ten minutes or so and then read out to the group. Everything from describing a pile of clothes and then the character that might own them, to writing our autobiographies in exactly 100 words of exactly one syllable each. By the end of the week we were all on fire for writing, and having read out all those stumbling, unpolished, off-the-cuff pieces, we had forged into a group of people with few inhibitions about writing in public.

Of course the wording of my invitation meant that everyone turned up with alarming quantities of booze, not to mention the daffodils and the Belgian chocolates and the Camembert and the Bukowski book; they are a generous-hearted bunch. From the kick-off it seemed likely that the wine would win over the writing.
The sun turned up too, as you know it was a perfect twenty-one degrees in London, and soon my garden was dotted with eager writers scribbling away at the assignments we set each other. We started by repeating the pile of clothes and other old faves from Skyros and as the words and the wine flowed we moved on to exercises made up on the spot, all of which worked surprisingly well.

Oddly, several people mentioned how they benefitted most from the exercises they initially thought would be least useful. For me, it was variations on, "You are a football manager giving a half time talk." Also a game where we randomly generated first lines for each person consisting of an emotion, an adjective and a concrete noun. In the end, I had a riotous time with "Confidence is a wonderful man-trap."
We put in the work and by the six o'clock deadline, most of us had written more words than we'd managed in a long time. By then we were ready for the wine to truly take over, with a trip to our secret location for the best pizza in London.
Today I feel a little weary and apologise again for having no post ready for Strictly Writing. Maybe I got some volcanic ash trapped behind my eyeballs. So in the spirit of yesterday, I've written this as first draft, rushed it off and laid it before you.
On a different note, thank you for all the entries that have been coming in for The Strictly Writing Award. We are greatly enjoying reading them. If you haven't sent a story yet, please do so. We're nearly ready to showcase the first shortlisted story; it will be up here next Friday, but there's plenty of months to go, so keep them coming.
Posted by Roderic Vincent at 06:00

A re-union is a lovely way of catching up - and well done for organising it! Too often we simply enjoy ourselves and then move on, forgetting what's gone before. I've never been to Greece, but I reckon the blue seas and scenery is inspiring in a literary sense.

Hope you had a great weekend :)

First draft? Argh. Huh.
How enterprising of you to organise the reunion and so glad it went well and that so much came from it, even if some of it was a hangover!
I hear those Skyros courses are ace...
Susiex

Interesting post. It lacks the polish of the lazily considered piece but the spontaneity more than makes up for it. It flows with a sense of urgency and enthusiasm.

Funny that you mentioned 'ash'. I was stuck in Belfast for a week, a day by day week as my flight was cancelled and rebooked. Interesting places to see there, Queen's University, the wonderful Belfast Museum and particularly the Linenhall Library which anyone with Irish connections would be enthralled with. But the hostel was too noisy; they tend to cater for younger people now and groups, and they inundated me with 16hrs a day of rock/rap, which I just hate with all my heart.

Looking forward to the short story - and trying to come up with something!

I love the blog that arises from having too much fun writing to write a blog!

The Skyros reunion sounds blissful. Just the thing to regenerate creatively. I'd love to do that Skyros course. One lottery day. But a day in a garden with a load of trusted writing friends and trusted wine bottles sounds an excellent back up.

I loved this Rod - for a first draft, theres a great sense of place and atmosphere. Thats where I've been going wrong - I'm not drinking ENOUGH wine!

Amazing post, Rod! What a lovely thing to do - get together with all your Skyros chums. I am desperate to know where the best pizza in London is to be found, too!

I'll email you, Geri. It's already difficult enough to get a table there, so I don't want to give them any unneeded publicity.

Yes, I want to know about the pizza too! Although I fear it may be in south London [cue my north London flesh shuddering].
Sounds like a great day, Rod...

How dare you, Caroline! I would never set foot south of the river.

It was a great post - very immediate :o) Love the idea of the writing exercises too - nothing like a deadline to get the grey matter working (and I'm not talking ash!)

Thank you for the nice comments about something I dashed off last night with a hangover. Today I'm awake and full of joy and ready for four days uninterrupted writing. Yippee.