When writing starts to get dangerous 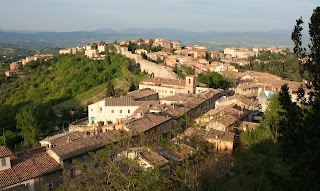 Did Amanda Knox's graphic stories of brutal rape ultimately lead to a conviction for murder? Well according to some newspaper reports, it helped. The stories which appeared on her MySpace account, emerging after her arrest on suspicion of murdering fellow student Meredith Kercher, were lurid and graphic. The partially clothed body of her flatmate Miss Kercher was found on November 2, 2007 after she bled to death from knife wounds, the crime scene indicating a struggle. At the end of the trial, two judges and six jurors convicted Knox and Raffaele Sollecito, her former boyfriend, of murder and sexual assault.
The story on the exchange student's MySpace social networking site was about the drugging and raping of a young woman. Can this stand up as evidence and can we believe that this is what she's like in real life? When the item emerged, headlines such as 'Amanda Knox wrote stories about rape' appeared in papers. So too does many a writer.
One of the University of Washington student's stories was called 'Baby Brother' and it gained a total of one comment - not much by comparison. The Daily Mail at the time said the writing on Knox's blog gave a worrying insight into her bizarre life. But critics who were clued up suggested that the only confirmation here was that she was a poor short story writer, given her constant use of 'furrowed brows' overly long sentences and poor descriptions.
It's interesting to note that my Work In Progress starts with the live skinning of cats and dogs in China. Now if I'd been a suspect in an animal cruelty case I most certainly would have been questioned and charged. However, I'm a vegetarian, and have been for the past 19 years, and I'm also a member of PETA. Would the jury believe me if I stood up and said that?
If there's a topic I'm interested in and want to read up on, I tend to go as close to the epicentre as possible. In this case, there's The Seattle Times, the stranger.com and Seattlepi.com, all of whom are carrying stories about her relatives protesting her innocence. And they seem to be fascinated too with her writing. According to a report in the Telegraph which was published only days after her life sentence was handed out in the court in Perugia, Amanda won a prison essay-writing competition which centred on a young woman who was injured during a drugs-fuelled sex party. Surely this is enough to confirm her guilt?

* Stock photo of Perugia
Posted by Gillian McDade at 06:00

I don't really know enough of the details about this case to comment, but aspects of it do seem a bit fishy. Really interesting post, Gilliant...

I agree with caroline G that I do not know enough about this case.

However, if someone who is being suspected of murder writes descriptive stories, which detail certain aspects of the murder in question - that only the murderer, victim and officials would recognise, then surely that would be enough to convict them as opposed to passing it off as a mere coincidence?

Afterall, generally speaking, most writers write from their own experiences whether that be descriptions, feelings or actual events.

Hmm. It is a tricky one. Luckily I am not on trial for anything so heinus and my writing will deffinately back that up!

I heard something on Radio 4 a while back of an American man who was convicted of murder because he had written a novel about the event, or something. Talk about writing what you know! But I heard of someone else who was dismissed from her employment because she wrote about stuff her employers considered 'dangerous'.
Susiex

It's a very grey area. Some writers write what they know - some don't.
That's the problem when the press get involved and the jury gets to hear of matters not strictly pertinent to the case - they can't be completely objective.
I wonder if we'll ever know the truth of what happened that night.

I hate the idea of someone acting upon their writing musings especially if they're violent musings - but I don't know enough facts about the case either to form a definite opinion. If its true it brings a whole new meaning to 'show dont tell'
Ugh...

I think ultimately it's a person's behaviour/actions that define them. Amanda Knox has behaved oddly from the start of this case, doing handstands and cartwheels in court for instance, and in The Observer today there's a letter from a mother whose daughter was a student with Meredith in Perugia, and apparently when she asked Amanda how she felt about what had happened to her friend, she replied, "Sh** happens."

She seems like a strange girl and maybe her writing reflected that, but ultimately I don't think it would be enough to convict a person - unless it contained details only they could have known about of course!

I read about the links with Amanda Knox's writing, too, and felt a shiver down my spine. There's a lot about this case that I fine worrying - there just didn't seem to be any conclusive evidence, but a lot of comments about such weird things as her doing cartwheels the day after the murder (!). Strange, yes; evidence of guilt, surely not. Not that I'm saying I don't believe she was guilty, just that the gossip, and conclusions drawn, make me uneasy. Too many people DO believe that our writing reflects our own innermost thoughts, as most of us know: I'm often confronted by friends asking who or what I 'based' certain aspects of my stories on - as if I couldn't possibly have invented them! Very unsettling stuff - well done Gillian for airing it.

Very very interesting point. (I actually didn't know anything about the Knox aspect so I'm not talking about that, just the general point re whether it should ever be held as suspicious when a writer writes something nasty /criminal /etc). I hope to goodness not! We have imaginations and the ability to translate those to written words. Clearly if the intricate and incidental details of something were identical, that would be a tad suspicious, but still not on its own and only added to other details, so only cirumstantially. The fact that I have written many grotesque scenes does not mean I have witnessed any of them, let alone caused them.

Kate - although I agree with your point about details "that only the murderer, victim and officials would recognise," I disagree that most writers write from their experiences, even if you extend that to vicarious experience. I have written about countless things I've never experienced, otherwise my books would be rather boring!

Olivia says (and I agree) "Too many people DO believe that our writing reflects our own innermost thoughts, as most of us know: I'm often confronted by friends asking who or what I 'based' certain aspects of my stories on - as if I couldn't possibly have invented them! Very unsettling stuff - well done Gillian for airing it."

Glad this has generated some debate. It's definitely a fascinating topic and perhaps I'll come back to it in a future blog!

This is an interesting thread. I think that lately the press tries and convicts in the court of public opinion before the person actually gets to trial (can such a trial be unbiased?). I have seen way too much coverage of this murder in the news - every nuance of "odd" behavior has been covered. God forbid most of us would be scrutinized on our behavior or our writing and convicted for it! There wouldn't be enough room in the prisons...

I have no idea whether she is guilty or not - but, to judge her on writing or behavior rather than firm evidence is wrong.

I think a point worth keeping in mind is that the number of writers who are suspected of murder (for example) is far fewer than those who write about it.

And I see it as a writer's job to make stuff up - as Nicola's already said, if we didn't our stories would be pretty boring!

Thanks for posting, Gillian.

A very interesting post. I suspect we will never hear the whole story - our opinions are probably formed by which newspapers we read (sad but true?) - the features they chose to run and the evidence they chose to present.

One thing it does make me think about is the writing that I don't do - the twisted ideas I hold back from putting to paper. Just in case, and here my writer paranoia kicks in, someone deviant was ever inspired to try them out.

So my question to the panel is: should we ever censor outsleves on the page?

It's true she wrote a short story about two boys raping a girl. The second short story, the one supposedly written in prison, doesn't exist. It's an urban legend spread by some sick people who hate Amanda Knox.