A chat with YA writer Emily Gale + Prize Giveaway 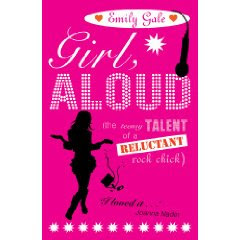 Emily Gale is a London-born writer of children’s books, currently living in Australia. Girl Aloud is her first book for teenagers. Emily has kindly given us a signed copy of Girls Aloud to give away to one lucky person who comments below. The winner will be chosen out of the SW hat and posted up on Friday.

Kass Kennedy, the main character in Girl Aloud, is being pushed to audition for the X Factor against her better judgement. What gave you the idea for the story, Emily?

The initial spark came from thinking about pushy parents – in particular there were a few first-round auditions on The X-Factor in which the kids were tragically lacking in X and the parents were wearing gigantic rose-coloured spectacles. Watching those clips made me want to go home with the families and find out the set-up: how you go from clapping adoringly at your toddler singing Incey Wincey Spider, to encouraging them to make utter twits of themselves on national television? I wanted to complicate matters by giving my main character a lot of oomph and absolutely no desire to be a star – we hear a lot these days that “everyone wants their 15 minutes of fame” and I was sure my character wasn’t interested in that. So the dysfunction of the family grew from that scenario.

How easy was your road to publication?
I worked as a children’s editor for several years and following that I published a few pre-school books, so that fell into my lap but the journey to publish Girl, Aloud was a lot trickier. I had a false start with my first agent (with a different book) and we parted ways - at the time I thought that was it, that you only get one shot at it. I’m happy to say that’s completely wrong. I wrote Girl, Aloud purely for my own enjoyment and to prove to myself that even though things hadn’t worked out, the writing part was the most important. I did the usual rounds of subbing to agents and seemed to be at that frustrating “so close but no banana” stage for ages (ages in my eyes, not actually ages), but then I found Louise Burns at Andrew Mann. Her suggestions for rewrites made such sense to me that I was happy to do them even without a guarantee at the end that she’d take me on. But she did. It was a relief to have someone fighting my corner at last. Most of the subbing happened while I was in the process of emigrating to Australia, which I think helped a great deal with that usually awful waiting process (granted that’s probably not very practical advice for most people). And then came Chicken House, and an editor who liked the serious aspects of my novel as well as the fun bits. Finally the stars were all aligned. I do think stars aligning is a huge part of it. That and persistence. And Simon Cowell, obviously.

You also write for young children. How different a discipline is that from writing the teen stuff?
I’m fortunate to have a couple of willing guinea pigs (I mean children, I actually can’t stand guinea pigs or anything else rodenty) so I’m thinking of them when I write picture books, instead of conjuring up my inner teenager. I don’t find the process so very different apart from that because I think in terms of visual scenes in both cases. In one sense the younger stuff can seem easier because the end is always in sight, or you can hold the whole in your hands and look at it from all angles – not like writing a novel where it often seems insurmountable and messy.

So is it easier?
There is no room for self-indulgence and every single word must be precisely right in a picture book. As the author there is a skill in letting the pictures do some of the talking, which if you’re not an illustrator is an extra challenge. I consider myself to be a Learner and am just as ambitious about picture books as I am about future novels.

The main character’s father in Girl, Aloud has mental health issues. Did you do a lot of research before writing the book?
As I’m slightly allergic to planning I have to say that no, I didn’t research before I started to write. The dad’s character crept up on me during the course of the first draft. The shape of the story was laid down and then when I knew exactly what was what I went deeper into his mental health issues, reading up on the types of emotions children go through – the questions they ask, such as: is it my fault? That was a big part of what I was interested in, in terms of the story. So, it was a mixture of reading guidance aimed at young people, online forums, personal experience and then plain old imagination.

Are you a quick first drafter, or do you edit as you go along?
I was the kind of writer who can’t move on from an imperfect phrase, until this book. In November 2006 I decided to do NaNoWriMo, having been dismissive of it before. I was 8 months pregnant, we were in the middle of renovating our flat (no proper kitchen, no proper bathroom kinda scenario) and I intended to have a rip-roaring month of intensive writing before the birth. It was completely eye-opening – thrilling, writing-in-the-dark, writing without a care, putting one word in front of the other and knowing that was okay, I could fix it later. Very liberating. There was a lot of rewriting, of course, and although I haven’t done NaNoWriMo since it has changed the way I work – I’m much easier on myself these days and appreciate how important the rewriting process is, so I let myself get away with the odd dodgy sentence or unfinished thought. I think I’m still quite strict on the actual prose but I let myself skip over things more – as a result I’m usually adding-to at the redraft stage rather than cutting.


Which writers make your heart sing?
Oh, too many! I’ll have to limit myself to four or we’ll be here all day and no one wants that. I am in awe of the originality and quirkiness of YA author Jaclyn Moriarty (have just finished her latest, Dreaming Of Amelia) and only wish I had the edginess and truth of Simmone Howell (try Everything Is Beautiful). Recently I discovered Christos Tsoliakis (The Slap) and he blew me away; so clever, so accomplished at different voices. I have a huge literary crush on Kate Grenville (favourite being The Idea Of Perfection). You can tell I’ve recently moved to Australia, can’t you?

Describe a perfect writing day…
It really depends where I am in the book. I remember a day, towards the end of a big rewrite, when my partner whisked the children away in the morning and stayed out for hours – and I sat in my pyjamas and drank tea and didn’t wash or speak or pay any attention to the outside world until the job was done. The unwashed / not getting dressed part seemed to be significant – something about indulging that one burning desire, to finish, and ignoring all else. Wonderful. But that’s a rare thing. Mostly I’m clawing for time….

http://emilygale.co.uk/
Posted by Caroline Green at 06:00

I loved reading the interview with Emily - will definitely add Girl Aloud to my 2010 list, and I hope all our readers will do the same.

And many thanks Emily for taking the time out to be on SW! Best wishes for your future books.

Wonderful interview - I loved reading that. Thank you! (P.S. Don't enter me in the draw as I'm already the proud owner of a copy of Girl, Aloud.)

Oh, and I meant to add that I loved the book!

Fabulous interview, Emily - and Caroline. Really enjoyable and interesting to read. Love the fact that NaNo brought a new phase of writing for you - that's inspiring. And if I were a teen, I'd be gagging to read a book about the X Factor - a brilliant idea.
Susiex

Great interview you two. Best of luck with it all, Emily (and no need to enter me into the drawer either cos my copy's right here).

Something about scribbling in an unwashed state, it's the most luxurious indulgence.

I found NaNoWriMo very liberating too. I did it for the first time this year and I've decded to carry on writing my first NaNo novel.

It's always interesting to hear how succesful authors go about their writing - the highs, lows aand what they've learned from the process, so thank you for sharing that.

Girl, Aloud sounds wonderful and I know it will be a great success.

I too have my copy! Although I dont qualify anyway so why am I mentioning it?!
Great interview Emily - love that vision of you in your jim jams not caring about the outside world.
You mention a lot of authors I dont know and must look up although Kate G is a fave of mine too.
Thanks for being here Emily, I know how busy you are... F

Enlightening interview thank you for sharing.

I think it is a fabulous trait to be able to entertain teenagers and young children alike. I only hope my 9 month old son will follow suit and be an avid reader like both his father and I.

I'm still waiting for my copy from Amazon, whihc I was sure I'd pre-ordered, but perhaps I hadn't...

I really enjoyed this interview. Thanks, Em.

Enjoyed the interview. Looking forward to reading your book ... and all the other authors you suggested.

Yet another good excuse to ignore the WIP!

Great interview, I can't wait to read Emily's book and the other ones she recommends - have been eagerly awaiting the new Jaclyn Moriaty novel.