The Monkey in my Hall of Residence 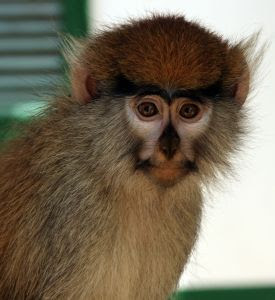 Being slightly Christmas-phobic I’ve decided to leave all tinsel related topics in the capable hands of other Strictlies less inclined to panic attacks whenever the subject of Delia’s Christmas versus Nigella’s is raised. Instead, in this post I’ll mostly be focusing on two writing relating incidents that have particularly caught my attention this week.

The first is by way of the lovely Alan Bennett, whom I shall forbear to call “that National Treasure.” In the cockle-warming "Bennett on Bennett”, broadcast last Saturday evening on BBC4, he remarked how embarrassed he always became when people told him what a nice man he was.

"When people say, you know, you're nice-natured or kind-hearted or so on, about a writer, that's never entirely true, because there's always this monkey on your shoulder, as it were, you know, watching," he says.

Though no stranger to the habit of observing life one step removed and often times wondering how long I can decently afford to leave it before wringing a story out of someone’s misfortune, I’ve always found it a slightly distasteful trait to admit to. But if Alan Bennett can own up to it on national TV then suddenly I don’t feel so bad about myself any more.

In fact, from here on in I intend to call the monkey on my shoulder Alan. He is slightly round-shouldered with the benign, shortsighted expression of a vicar and his favourite food is Garibaldi biscuits. What’s your monkey called?

What happened earlier this week, when an email from fellow womag writer, Womag, herself, came pinging into my inbox, turned my thoughts in a completely different direction.

I’d written a story that appeared in last month’s Fiction Feast called “Not Wild About Harry” which I’d set in what I fondly imagined to be one of those grotty rented houses we all lived in as students, that smell of damp and unemptied bins.

Womag was very nice about the story and said she’d never thought of setting a story in a Hall of Residence? A what? I spluttered – not out loud, of course. But how could she have thought this was a hall of residence? I’d imagined it clearly in my mind. A tall, Edwardian terraced house, squashed up against other tall, Edwardian terraced houses. From the outside the view is of curtains that don’t meet in the middle and a black bin takes pride of place in the four foot square front garden.

I’d written all this, hadn’t I? Surely anyone with half a brain who’d read my story would have picked up on all this description? That was when I thought that perhaps I really ought to go back to the story itself. And here is what I wrote regarding the description of the building in which the story took place: -

She’d watch him taking those big strides down the street, past the overgrown privet hedge, then up the path.

You see, I don’t like writing descriptions of places. Frankly, I’m rubbish at it. I never remember any place I’ve visited for longer than about two hours, though I can remember a face I glimpsed in a crowd for twenty years.

But maybe I can forgive myself on this score too. Readers have imaginations. They don’t need long descriptions of settings, which they’d probably just skip anyway. The story is the thing and everything else is just gravy.

See, I knew there was a connection between the monkey and describing places. And it’s this. Don’t beat yourself up about the things you feel guilty about – hogging writing time when you should be making nourishing meals for your family, that streak of curiosity that borders on the prurient. And don’t be disparaging of the B minuses in your writing.

Be nice to yourself. It’s the season of goodwill, after all. Good heavens. Did I mention Christmas?
Posted by Geraldine Ryan at 06:00

I think, if truth be told, all we writers watch the world with one eye on a potential story.
It's not nice to admit it, though, ha ha.
And for what it's worth, read your story, and it was so not a hall of bloody residence.
HB x

A lovely post, Geri. I'm with you, in hating too much detail, especially architectural. I'm afraid any book that begins with a description of the front of a house is an instant turnoff for me.

Like the idea of Alan the monkey on your shoulder too! Not sure what form mine takes...something larger and more unpleasant, I think! Rottweiler?

Yes, my heart sinks when i have to describe a setting - although i really enjoyed it when writing my Ancient Egyptian book as, settings-wise, there was less to choose from. My peasants and their neighbours all lived in mudbrick houses, there wasn't the choice of detached, semis, cottages, flats bla bla. Much simpler.

As always love the post Geri. I too have an 'Alan' except she's a she and she's called Lucy - surname Fir. Lucy Fir. Geddit?!
She's a little devil that one...

Love the monkey! Mine's called Rupert. And it's Nigella all the way for me :)

Thanks for the responses, girls!

Thanks, Geri - I like the idea of being kind to our writerly selves, and not just over Christmas.
Susiex

Ooh, good post. My monkey appeared when I was seven. Then went away when i was 18 - or so i thought.

Nice post, Geri! I like the idea of the monkey. And I'm with you on descriptions of places. I've written whole books without any, and then been 'edit-coerced' into going back and putting some in!!

Right now I'm reading Victoria Hislop's "The Island". Way too much description of the Greek scenery for my taste- just skipping through it quickly.

I blindfold my monkey sometimes then when I don't - or can't - adequately describe what I'm seeing, Montague can't offer me sagely advice. They are all supposed to have names, right?

Ah, you see, there are off-campus halls of residence in the town where I went to university. They are converted Georgian terraces on residential streets, and might well have privet hedges and front paths... When I read your story it was the shared kitchen that made me think hall of residence, and once I'd set it there in my head there was no shifting it!