Guest post by Rosy Thornton - The most beautiful place on earth 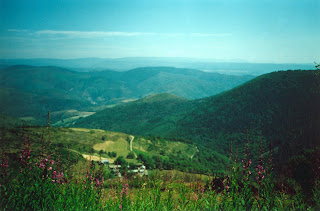 Have you ever been on holiday somewhere so peaceful, so wonderfully, soul-restoringly beautiful, that you carry the place away with you, tucked somewhere deep inside yourself, to escape to later for succour and refreshment in times of stress?

Well, for a novelist, that process of escape is part of the job description. It might be for purposes of creation and not of mental restoration, but it is very much the same thing. And for me, recently, the two functions coincided blissfully in one, with the writing of my novel, The Tapestry of Love.


Twenty years ago now (can it really be that long ago?) I spent a fortnight’s holiday in the Cévennes mountains, which lie at the southern tip of the French Massif Central. It was – and remains in my imagination – the most beautiful place on earth.

I suppose for those twenty years it lay waiting in the quiet places of my mind, until a year ago when it rose to the surface, unbidden, and demanded, ‘Write about me!’ Every morning of a bleak winter in the Cambridgeshire fens I sat down at my keyboard, closed my eyes, and found myself back in those wooded mountains, where I built myself an old, stone house at the fringe of a tiny hamlet on the slopes of Mont Lozère.

Second best to moving in myself, was to write myself an Englishwoman, Catherine Parkstone, to invite her to leave behind her home in England and to come to my cévenol retreat and build a new life for herself there among the chestnut woods. I gave her a plan to start up in business as a seamstress, making soft furnishings for her new neighbours; I peopled her hamlet with local farmers and endowed them with deep layers of French reserve; I gave her a tapestry frame and a basket of silk thread and set her to work.

The result was The Tapestry of Love – the story of Catherine’s slow-growing love affair with the place and its people.

But if you think that this is a picture of Catherine’s house, then think again. Her house stands 1,200m above sea level, and mountain weather is harsh. Cévenol dwellings are built of the sombre local granite, with walls a metre thick and roofs constructed of the same material.

Their doors are solid oak, not glazed as in my cover picture; in autumn and winter, the oak swells so much with damp that Catherine’s door sticks in its frame This cover visual, I told my editor, is of a soft, southern house with a soft, southern door. It is clearly Provence and not Lozère. So what? came the reply. This is an image of how people imagine France, so this goes on the cover. If we used a photo of a real cévenol house, she said, it would look like February in North Wales and nobody would buy the book. And no doubt she was right.

Where we really went on holiday on was dark and dumpy, stone-roofed and almost windowless – but in surroundings of such stark, heart-stopping beauty that twenty years later I had to write a novel about it.

The Tapestry of Love is published today by Headline Review. Rosy Thornton is the author of three previous books, all published by Headline Review: More Than Love Letters, Hearts and Minds and Crossed Wires. She teaches law at the University of Cambridge, where she is a Fellow of Emmanuel College.
Visit Rosy's website here.
Posted by Caroline Green at 06:00

Beautiful, Rosy. This fills me with a longing to head for the lands of mountain and tree, to settle in the houses of stone and timber carved out of those hills and woods.

It must be a perk of your job description that you can live so many lives.

Tapestry of Love completely drew me in, Rosy, and I can see why you fell for the region - I wanted to move there myself after reading the novel! Congratulations on such an evocative story.

I felt the same when we drove through Glen Coe in Scotland during our travels last year. The beauty of the scenery overwhelmed me and will stay with me always I think.

Nice book cover - even if it does look like Provence :)

Oh, I'm really looking forward to reading this. Congratulations, Rosy - and I hope you will one day return to this beautiful place.
Susiex

It looks so heavenly in that picture, Rosy...I want to go there RIGHT NOW. Best of luck with the book - can't wait to read it - and thanks for posting on SW.

Thanks, everyone - and thank you so much to the Strictly team for letting me have the space to talk.

It was actually 'im indoors who took the picture, and he's quite made up to have it thus displayed on the web!

Great to have you on board, Rosy. Congrats on your success and I look forward to reading it! Think I might book a holiday....

I feel the same way about the Missouri Ozarks. Nothing I like better than wandering down a gravel road with no destination in mind.