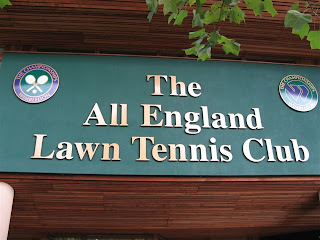 I love tennis, especially Wimbledon and the atmosphere of this particular sporting event is really hard to beat. The men's Wimbledon final on Sunday wasn't much of a contest. As usual Rafael Nadal made all the right moves and managed to re-claim the tennis trophy by winning in three sets. And the jubilation he demonstrated at the end of the match, including the roly poly manoeuvre, is similar to the personal satisfaction and delight that authors experience upon being told they will finally be published.

Writing and getting that elusive book deal is all about 'game, set and match.' There are the hours of practice, the year-round training, the disappointments and the trophies. Tennis players are in the practice courts when they're not competing, just like us authors, who spend hours creating and perfecting the manuscript before sending it out – a procedure which the reader and customer doesn't see. And the fitter tennis players get, the better their performances will be. Similarly, authors who read, read and read, and write, write and write will develop their craft more than those who don't take the time to learn the techniques.

And of course, no tennis match would be complete without a bitter disappointment. In every match there is a winner but also a loser. The same is true in the agenting or publishing world. For every twenty full manuscripts that an agent requests, he or she may only take on one writer. And for every five the agent passes to a publisher, only one may make it through the selection process. Like any grand slam tournament, for every fifty players who enter, there can only be one winner. The rest, while illustrating that they are undoubtedly top tennis players, suffer disappointment which is often hard to hide. Springing to mind is Andy Murray who, in interviews, clearly showed that post-Nadal depression had set in following his performance.

But the best part of writing has to be trophy time. After endless practice sessions, the tension of an intensive tournament and the nail-biting play from the opponent, the champion tennis player finally sees the end in sight. At 6-2 6-4, the finishing line has been crossed for the ladies and the win goes down in history.

When you get that book deal, you can shout, 'game, set and match (insert your name here!)' Don't forget to celebrate with a punnet of strawberries and cream to emulate the Wimbledon experience.
Posted by Gillian McDade at 06:00

I think you have hit the nail on the head and given the best advice any writer could ever receive - read, read and read and write, write and write.
HB x

I really like that analogy with fitness there, Gillian. You're absolutely spot on, I agree - we may not be able to play professional sport, but we can certainly make sure we read, read, read and write, write, write.

I think that's the key - read, read and read. I mean, how many times have you heard someone say they're written a book, but not even managed to finish reading one novel!

I'm a massive tennis fan, so thanks for extending my Wimbledon into a third week! I remember reading that of the juniors in his age-group, Tim Henman did not look like the one destined for glory - others had more natural flair. But in the end he was the one who had the commitment and dedication and so he put in the hours. Another lesson for us all!
AliB

Well, it is better than the World Cup! (ducks for cover)