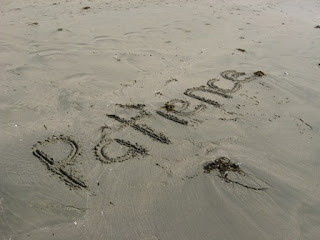 I have never been one of life's more patient souls. A supermarket queue of more than two people can get me tapping my feet and sighing with exaggerated despair. I hardly ever buy off the internet, as I find the thought of having to wait three days (and I think I'm being generous to Royal Mail there) for a package to land on my doormat frustrating in the extreme. I often have to fight the temptation to finish slow-talking people's sentences for them, regardless of whether or not I know what they are actually going to say. As a child, I was once heard to utter the dreaded "Are we there yet?" before I had even got into the car. So what does all this prove, aside from the fact that my family and friends must be pretty patient themselves to put up with me? Well, the damning truth is that despite being a writer, I really don't have the temperament for it…. because writing, you see, is All About The Waiting.

Take the "simple" act of writing a book in the first place. Admittedly the only person you're waiting on to finish the damn book is yourself, but by God, I sometimes feel like shouting at my own fingers as they hover hesitantly over the keys, fluttering feebly with pent-up phrases. Come on! Just type a word – anything! And then repeat that 80,000 times… Writing a novel is playing the long game, and for someone who can't even get through an Easy Level Sudoku without losing interest, that's a challenge in itself. When I wrote my last novel, the whole thing was as clear as day in my head from about 10,000 words onwards. I could almost read it word for word in places – and yet I still had to write it all down. Surely there should be some kind of thought-reading machine that can do that for you by now? Yes, I get impatient with science and technology, too.

When you've put that final full stop on the page, things don't get much better. You gird your loins, take a deep breath and rush down to the Post Office with your trusty jiffy bags, all addressed to various luminaries within the agency firmament. Then you go back home and make yourself a nice glass of Ribena. Then, well, you have to find other things with which to accompany your time for the next however many weeks. I realise in retrospect that my own waiting game when it came to hearing back from agents was mercifully brief – but did it seem that way at the time? No. It did not. Every morning, I would charge to the front door and splutter with indignation at the blank mat. Where on earth were my rejections? (I didn't entertain the possibility of acceptances at that stage, you understand.) Of course, if they had come back by return of post, I would have been equally outraged. They didn't even read it! Which just goes to show that as well as being terrible at waiting, I am also perverse. Luckily, I managed to get an agent before I slit my own wrists with frustration, and she in turn managed to cope with the increasingly falsely bright and breezy sounding emails with which I bombarded her over the next few weeks. Just wondering if you'd heard anything more from the publishers?! I know I only spoke to you half an hour ago, but hey, you never know!! Actually, I probably deleted most of these before I pressed Send, which is just as well.

By April 2008 – fanfare please – I had a publisher. At last! The culmination of all my hopes and dreams, and an end to the hell of waiting. At least, that's what I thought. It is only now, as I hover on the brink of publication (seven weeks on Monday, and counting) that I can even permit myself a hollow laugh at my former naivety. If you thought it was bad before, just try testing your patience over the pre-publication period. You sign the deal, you celebrate in a flurry of champagne corks and confetti (well, you could have done), and then absolutely nothing happens for months on end. Well, of course that's not quite true – plenty happens, but it's all at the publisher's end, and short of hiding out under your editor's desk, there’s no way you’ll get to see much of it. Over the past year, I've tried many things to attempt to get the year to go quicker. I've become a dab hand in the kitchen, I've taught my cat an excellent repertoire of tricks, and I even considered a jewellery-making course when the going got tough. At the end of the day, however, time is time. You can't hurry time, no, you just have to wait. Or was that love? No matter. The important thing to remember is that, in the immortal words of Guinness, good things come to those who wait… and despite all the hair-pulling, teeth-gnashing, finger-drumming moments along the journey, I wouldn't have it any other way.
Posted by Rebecca Connell at 19:37

I loved reading this Becky. It so chimes! Sometimes when I'm writing a serial whose outcome I know because I'm working from a detailed synopsis I'm thinking "Come on, come on". Why doesn't the damn thing just put itself down on paper?

Short story writing can be as short a turnaround as three weeks though it can drag on with some magazines abroad. But God knows how I'd cope having to give two or three years of my life to completing a novel then going through the whole process of finding a home for it.

I expect you posted this then wondered why, two minutes later, no one had yet got around to posting a reply.

Great post, Becky! I could really relate to this. I too am naturally very impatient, which only makes it worse.i am having to force myself at the moment to rewrite properly instead of rushing onto submissions.

Maybe you could pass on a trick for me to teach my cat:)

Fabulous post! So funny, and so true! (Tap-tap-tap, 75 days until my second book is out!)

Brilliant post, Becky. Very, very funny and, God, I can identify with it all..

I'm someone who even spontaneously combusts at how slow people WALK!!! [Why won;t they hurry up, FGS!] Maybe impatience is a common thing in writers...
Feel free to share waiting your angst with us all here anytime :-)

Great ot - and I agree so much about the need for patience. Exciting times, though, Becky!

Many thanks, all! Jem - ha ha, I did actually, I was refreshing for a while last night! And Caroline....me too. Why do people walk so slowly on the Tube?! x

So true ... and it doesn't get easier! I've had 7 books published now and even waiting to hear back from the publishers about my thoughts for the next one is still excrutiating. I've found there's only one cure: don't ever sit around waiting! Get on with the next book, or write a short story, or anything! Of course, patience does seem to come easier as you get older, too. Oh, dear!

What gets me is those retired men you get in M&S food stores. They stand in the middle of the aisle while their wives pack the trolley. Or the women put the trolleys sideways so you can't get past. Grrrr! They may have all day but I haven't!

I really enjoyed your blog Becky. I can really identify with the waiting, although 99 per cent of my subs, once posted, seem to simply disappear into time...
And if you're an impatient walker, go to New York...I can't keep up with them, and I'm a speed walker.

Great post, Becky - I really identify too. My book is out in 3 months and I'm constantly refreshing my email thinking "Someone - ANYONE - just email me about something - ANYTHING - to do with it!"

why wait when you can write? great post. x

While you wait, write the next one! Or invent one of those plug-things they have in the Matrix, so you can download future novels direct from your brain to the computer. Both would be a good use of time.

Thanks! Totally agree about getting on with the next thing...the only problem then is that you end up losing interest in the first one and have to fake enthusiasm!

p.s. Gillian, meant to say, I have never been to NY but that sounds like an excellent reason to visit!

Oh yes, how I can identify. My publisher (I did manage to get one eventually) took nine months before ringing to accept my ms. I'm now counting the weeks (five) to publication day. It's all wait, wait, wait, in the writing game.

Nine months?! God, that must have been excruciating. Glad you got there in the end!

Brilliant post Becky - I totally identify with everything you've said. I'm in the middle of finishing off my first draft and it feels like it's been taking me forever! But of course, it's 90,000 words, which is a heck of a lot when you think about it! I remember my uni essays of 3000 words taking me three weeks to write.

My book is out in 3 months and I'm constantly refreshing my email thinking "Someone - ANYONE - just email me about something - ANYTHING - to do with it!"

And oh, for the head-download. I've barely started writing my new novel, but it all exists. What, you mean I have to write it down? Word by word? But that's ridiculous!

I think publishing must be the only place where time goes slowly these days!
It flashes by everywhere else.

Good Luck with your novel, Becky.

Thanks all! Emma, I know, I am only just vaguely starting to think about Book 3 in the recesses of my mind, and already I am annoyed that it isn't just sitting on my hard drive.

Excruciating is indeed the word...and time does seem to rush by everywhere else, which seems to make it all the slower.

Just reading those words gave me hope. I have only just started to go there - three chapters and the synopsis. Each time they come back I change the covering letter. I am now getting myself into quite a muddle. I do believe in my book, and I feel that there is someone out there who is going to let me help them get it out there. Thanks your blog gave me some motivation.