Crikey.  Who'd have thought. Not me that's for sure. 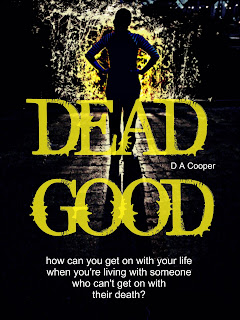 My daughter summed up my biggest fear when I told her I'd spent the best part of three days and four nights on both the Picnik and Kindle Direct sites designing the cover and formatting and re-formatting and loading and deleting and uploading and re-uploading and ... well, you get the drift... she said I was scared of the 'Pity Purchases'.  And I was.  So, so scared of them.  Because I've done it myself.  I have writer  friends who've published books - proper paper books with print on them and everything.. I know! ... and  because they're friends and I've known them years (some for over a decade) when they announce they have a new book out, what's the first thing I do?
Okay, second then... the first is always to check my green-levels, lay a metaphorical damp flannel on my seething, jealousy-consumed parts and calm down.  Secondly I fly a reply straight back telling them the news is 'fantastic' (which it is, of course it IS) and that I shall be purchasing said new publication as quick as you like.
Which for me, defeats the point.  Because I almost never read them.  In fact sometimes I don't even get round to buying them. *shameface* And it's not because I don't like said writer friend, it's just that what they write just isn't my kind of 'read'.  And if I bought every book written by every 'virtual friend then my shelves would be full to bursting with guilt-edged paperbacks.
So it was with great trepidation that I finally decided I'd self-publish my first teenage book.
My decision was 'helped along by a number of things, namely:
And actually it makes me sad to think that these 39 chapters would just be languishing idle in a dead file somewhere on the home pc and in the folder which sits beside me in my little room if I didn't set it 'free'.

When I finally pressed 'publish' on the Amazon site, I had a cup of tea and caught up with Sherlock.  The only people I 'announced' it to was my daughter, my husband and a writerly friend.  One texted me back with a 'whoop! one passed me a biscuit and Fi accidentally sent me her credit card details when she bought a copy* (thanks, our new TV is smashing!)
So, I give you 'Dead Good' (originally born 'Double History' and recently renamed) Also meet D A Cooper.  She was me, once. She is still only half me.  I'm actually a D.J. but a writer friend said the initials suggested more music than words.

It's here but UNDER NO CIRCUMSTANCES is this to be 'pity-purchased' - I will be justifiably insulted if this happens and I WILL hunt you down (I'm sure I'd work out how and who and where.... so don't even TRY it :).  I want this book to travel the good old-fashioned route to it's 'target' readership which is teenage/young adult based with a handsome ghost bias.
So, phew.  Does this mean I don't get to die unpublished?  Does it count? I'm still not entirely sure but I am very glad it has the chance of being read by whoever stumbles across it and I'm even looking forward to it getting some wobbly reviews.  Any kind of feedback other than 'not for us, thanks' is going to be much better received, I guarantee.

Oh don't worry about the pity putchases, you might get - what- five?

When the first email comes in froma stranger who bought it and liked it, you will have a feeling that will eclipse any reservations.

All the very best with this.
HB x

Good for you - this is why Kindle, and all self-publishing, is so wonderful. No longer do we have to hide behind the whims and fashions (and the need to make sensible profits) of the publishing business, but can do it ourselves, content ourselves with being proud of having done the very best we can.

And I agree with Helen - responses from people you've never met, will never meet - are just wonderful.

So - celebrate. You've earned it.

Congratulations on:
a) Making something happen.
b) Such a groovy cover (people do still say groovy, right?)
c) Investing in your dreams.

I'd be happy to host an interview blog post for you in early Feb (you'll probably be partied out by then...) - let me know a contact via my blog if the idea appeals.
Derek

Derek - really? Now that'd make me feel like a 'real writer' - am almost dizzy with delight! I will track you down and drop you a contact e-address. And partied out? Not a chance - I'm the one handing out the Twiglets but then I like it like that :)

Well done you, Debs. The cover's great and I love the title!
Respect.
Susiex

Well that't the most heartening thing I've read in ages, and ESPECIALLY because of what you said about liking to design your own cover. I won't be buying your book - it isn't my sort of thing and I'm decades from being a YA - but I'll send you several hearty cheers instead, and genuinely wish you success.

Thanks everybody - and Sandra - THAT'S what I like to hear!

Debs, I have now read it and thought it was fab. The MC's voice is really funny! Well done you!

And no that is NOT pity praise!

I think it sounds like an interesting read but sadly I don't have a kindle (yet). I couldn't find a link on Goodreads to add it to my wishlist to make sure I don't forget about it? Did I just miss it?