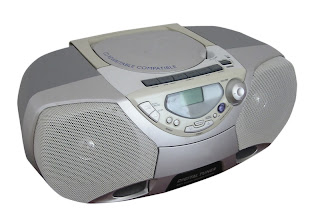 The writing room always has to be a quiet room. I don’t want music on in the background, neither do I want to hear voices, least of all ones which interrupt the master at work…’Gillian, what do you think?’ or ‘Gillian, I really don’t want to disturb you but….’

Our teachers always used to say the exam room was a quiet room. And, surprise, surprise, they were right! Apart from the odd cough or sneeze though. Whilst studying as a GCSE and A Level student, I was always distracted by the presence of music in the background. Even the radio was a major source of disruption. The radio only served as a brief 15 minute break from studying. I would switch on Radio One as a reward and listen to Steve Wright In The Afternoon (oh the memories), have a Kitkat and get back to work.

Times haven’t changed, except for the fact I now have to tolerate background noise while writing. It’s not really a choice any more. After all I’m not the only person living at number 15. I have to battle against constant renditions of Three Blind Mice and background MTV (which is a great tool to get Baby to sleep!) football on Five Live and re-runs of Two and A Half Men.

And the writing room is not a cafeteria either. We usually ask our Strictly guest posters what their favourite writing snack is and they will say ‘a packet of cheese and onion crisps’ or ‘a Twix.’ I’m at the other end of the spectrum in that many times I’ve forgotten to eat! Lunch would just disappear and before I know it, it’s 5pm and dinner time.

I think it’s all about discipline and whatever way you were taught to study, you’ll carry that on in your writing life. Am I right?

Email ThisBlogThis!Share to TwitterShare to FacebookShare to Pinterest
Labels: novel writing, radio one., snacking, Two and a Half Men

You're asking someone who's just eaten a bag of cheese and onion crisps for lunch and can hear the DLR in the background from my 'quiet' room! x

I find it really difficult to write with anyon ein the house, even if they're being quiet. Just knowing they're there can put me off.
HB x