We are delighted to shine the Strictly Writing spotlight on author Elizabeth Haynes.  Another NaNoWriMo is nearly upon us and Elizabeth is one of the many success stories associated with this annual challenge.  Here she divulges her very own winning formula and gives us one of those inspirational leg-ups we all need from time to time.  Take it away, Elizabeth...

"I feel a bit of a fraud, writing about NaNoWriMo as if I know what I’m talking about. I’ve being doing it for fun since 2005, like a lot of other people, and I never thought for one minute that it might lead to publication. But to my ongoing surprise, it did – and so, dear reader, for your delectation and amusement, here is a precis of my NaNoWriMo journey to date.

In 2006 I wrote 50,000 words of a vast, complicated police procedural – loved it, couldn’t think of an ending so just carried on with the middle hoping the ending would show up eventually. It didn’t. Lessons learned in 2006:
-          keep a spreadsheet or database of characters if you’re going to have lots of them
-          have a vague idea of who the killer might be when you start writing

In 2008 I finally got the balance right: a brand new plot, an idea of the ending (even though it changed in the editing process), and… the biggest achievement of all – I finished the blessed thing. I had a go at editing the result, but I ended up working on the first third of it over and over again, not having a clue what I was doing, and each time giving up thinking it was all pointless. In the end I showed the manuscript to two close friends, who both loved it - which gave me some hope. What made the difference was a conversation with my cousin, who uttered the fateful words, “Why not just send it off? What have you got to lose?” Oh, so simple!

The rest of the story has more to do with luck than judgement, but I did end up with a publishing contract for my 2008 book – Into the Darkest Corner, which was released in February 2011.  As everyone’s publishing story is going to be different, the lessons I learned earlier on are possibly more useful:
-          you can’t do anything with a story unless it has an ending, and
-          you won’t get published unless you actually show it to someone.

As always I’m in danger of being Mistress of the Bleedin’ Obvious here, so forgive me the platitudes, but let me console you with this: if I can do this, there is nothing stopping you doing it too. If you’re on that long conveyor belt between starting your first novel and a sparkling book launch, be proud that you’re on the conveyor at all, because there are a lot of people who are afraid to give it a go. You might fall off. You might get pushed off it by that annoying thing called Real Life. But if the only thing standing in your way is a big pile of excuses, I would urge you to be brave and go for it.

So here we are, standing on the edge of a beautiful new November, full of potential and dark, grey, cold days, just made for cuddling up with a computer or a notebook. This might be your year; the year you write something with a beginning, a middle and an ending that’s actually quite good… This might be the year that you end up with something you can actually show someone. And if not that, then it might be the year that you have the best fun, meet the nicest Wrimos online, go to some hilarious write-ins and emerge on 1st December feeling thoroughly pleased with yourself (and wishing you’d thought to do your Christmas shopping in October). 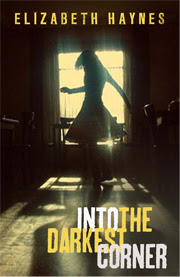 This year I’m starting with another germ of a story, a vague idea of an ending, a few good-ish characters who are waiting to tell me their stories, and a real cracker of a title! Please feel free to come and say hello on the NaNoWriMo site via nanomail – I’d love to hear from you. I’m Cosmic The Cat on there. And good luck with yours… I’ll see you on the other side."

Into the Darkest Corner is a powerful novel of obsession in it's many forms and is currently nominated for the People’s Book Prize, the winner of which is selected purely by reader votes. Voting continues until the end of November, and can be found here:http://www.peoplesbookprize.com/section.php?id=6

Really inspiring post. I'm going to do NaNo this year to motivate me to finish my novel - I love a deadline!

Have orderd Elizabeth's novel as it sounds right up my street :o)

Oh damn! I sort of knew I ought to know who the killers are - AND who will be killed, but so far they haven't revealed themselves to me. I DO have the spreadsheet though, in my mind ...
Thoroughly entertaining and feet- grounding post this - thanks.

Thanks for a brill post, Elizabeth. I've been wondering about doing Nano for the first time this year, and your story is a great incentive. Love the lessons learned along the way, and love your book cover!
Susiex

Fab, inspiring post and just the kick I need up the proverbial to get my nano head into gear. Thanks Elizabeth and good luck with the novel.